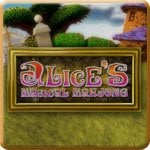 On the surface, the concept of combining the ancient Chinese tile-matching pastime of mahjong with British author Lewis Carroll’s classic fantasy story Alice’s Adventures in Wonderland seems as far-fetched as… well, a white rabbit in a waistcoat carrying a pocket watch. But thanks to outstanding production values, solid mahjong gameplay, and well-executed hidden object rounds that don’t manage to feel tacked on, Alice’s Magical Mahjong is a thoroughly charming outing.

Like the book on which it’s based, the plot of Alice’s Magical Mahjong begins when the young girl Alice chases an odd-looking rabbit into a hole and emerges in a strange Wonderland. The game’s 10 chapters are more or less faithful to the whimsical events of the story, as Alice races a Dodo bird, is given advice by a smoking caterpillar, has tea with the Hatter and the March Hare, encounters the grinning Cheshire Cat and plays croquet with the Queen of Hearts.

The scenarios are brought to life by soft and beautiful visuals, wonderful voice-acting and atmospheric music. Each chapter begins with a bit of narrative to set the stage, then dives into a hidden object challenge. There are two types; one is a traditional search for random items like an umbrella, crown or clock, while the second is related to the story at hand. For example, in the first chapter, Down the Rabbit Hole, Alice must find five white rabbits hidden in a painting.

These are no run of the mill hidden object mash-ups, however. Instead, each picture is a hand-drawn in the style of a Where’s Waldo book, where the objects to find are actually part of the scene in some playful way. For example, in a later chapter you’re given a painting of a flooded room and have to find five gray mice. Instead of just being super-imposed onto a scene, one mouse is balancing on a life-preserver, another is perched next to a gargoyle, and a third is poking its head out of a flower pot.

Once the hidden object portion has been passed – and admittedly these scenes won’t be overly challenging to complete, especially if you use the available hints by drinking from Alice’s Drink Me bottle – it’s on to the mahjong phase of the chapter.

The goal of mahjong, for those unfamiliar with it, is to clear a board of tiles arranged in a certain pattern by removing pairs of matching tiles. A tile can only be moved if it’s "free," meaning it can slide to the left or right. In this case, traditional Chinese symbols have been replaced by Alice-themed symbols like mushrooms, top hats, playing cards and question marks.

While the goal of traditional mahjong is to clear the entire board, Alice’s Magical Mahjong takes a page from the Mahjong Escape games where you don’t actually have to clear the board to win, but rather just uncover and match two special golden tiles.

What does playing mahjong have to do with the story, you ask? Well, the item depicted on the golden tile is an important plot item; for example, the rabbit’s white gloves that he asks Alice to find, or the caterpillar’s hooka (smoking pipe), or invitations to the Queen’s party.

Although the first few levels are easy, don’t be fooled. They quickly become more challenging as the board layouts become more intricate. If you reach a point where there are no more matches to be made, you can shuffle the board or restart with the same tiles to try a different strategy. You can also toggle on or off a mode that shows you which tiles are free, and use a limited number of hints to reveal a possible match.

There’s the occasional power-up, but the game isn’t inundated with them. There’s a special lock tile that can only be paired with a door tile, for example. Also, matching two special silver-colored tiles clears all tiles of that type from the board (i.e. if the two tiles have blue symbols then all the blue tiles will be removed).

During the mahjong rounds, Alice and other denizens of Wonderland, like the Cheshire Cat, will pop in with the occasional comment. It’s just one example of a dozen little extra magical touches that help elevate the game above the status quo, including menus that sprout flowers when you run the mouse over them, the beautiful map that charts Alice’s progress, and the charming animations that occur when you match two silver tiles, like water washing the extra tiles away or butterflies fluttering away with them.

Granted, Alice’s Magical Mahjong has a few bumps as well. Sometimes it’s hard to tell if a tile is free because of the board’s top-down perspective. Some of the hidden object items are hard to see, and the text during the narrative scenes doesn’t cover everything that’s actually being said, so if you can’t hear the voice-overs you’ll miss a significant chunk of the story.

However, these are small quibbles in the face of the overwhelming number of things the game does right. And as if the features I’ve raved about already weren’t enough, there’s also a Classic mode featuring 108 additional mahjong layouts to try (again, reminiscent of the Mahjong Escape series), as well as the ace up the game’s sleeve: a full-fledged level editor where you can create your own custom mahjong boards.