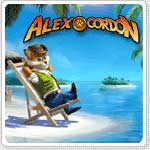 Treasure hunter Alex Gordon gets more than he can handle when he and his sister, Alice, discover a strange amulet buried in a cave on the island they’re exploring. The amulet shatters into five pieces, which awakens the island’s natives who capture Alice. To get her back, Alex must find the amulet pieces that are now scattered across the island and return them to the head native in this action platforming game.

Alex Gordon is a side-scrolling action game similar to Supercow or Turtle Odyssey. Using either the keyboard or mouse, the goal is to get Alex to the end of the level by jumping on platforms, climbing ladders and ropes, avoiding spikes and other hazards, and either dodging enemies or stomping on their heads a la Super Mario Bros.

There are five stages in the game with a total of 50 levels, along with 15 bonus stages where the goal is typically to collect as much treasure or as many coins as possible within a given time limit.

One of the game’s big plusses is that there are multiple goals for each level. Besides collecting coins and stars and discovering secret areas, the game also keeps track of how many monsters you’ve destroyed and how long it took you to finish the level. You can always replay individual levels to try to beat your time, collect all the stars, or defeat all monsters. Stars can be used to unlock extra levels, and you can spend coins on buying stuff for your retirement island such as a boat, beach house or better landscaping (this feature has nothing to do with the game, really, but it’s a fun diversion).

The level design of Alex Gordon is straightforward in comparison to the classic platformers. From obstacles like falling spikes and
crushing ceiling traps to underwater levels, dangerous lava,
fireball-spewing plants and Alex’s "wall-climbing" ability, there’s
nothing Alex Gordon offers that hasn’t been done before. Levels can eventually start to feel repetitive and stale owing to the
fact that there’s not a whole lot of creativity to their design. The
story and dialogue also feel trite, and the ending is a bit of a
let-down.

That said, Alex Gordon is also significantly less difficult than the
vintage platformers, and as a result, is also less frustrating. There
are no boss battles, and levels are peppered with arrow signs to point
you in the right direction as well as frequent checkpoints so that if
Alex loses a life you can start from the most recent checkpoint instead
of having to redo the whole level. (You will start from the beginning
of a level, however, if you lose all your lives).

The game also makes an effort to be cute: the Alex character is a brawny cat doing his best Indiana Jones impression, and an eclectic group of enemies includes fat beavers wearing Viking helmets, rock-chucking hippos, kamikaze birds and aggressive little tortoises that resemble the Teenage Mutant Ninja Turtles. Checkpoints are represented by Lucky, an excitable fan who wears an "I Love Alex" T-shirt.

So in spite of having a bit of a "been there, done that" feel, Alex Gordon nevertheless offers solid controls and generally well-balanced gameplay, which translate into a decent and playable casual platformer.