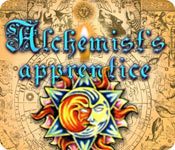 Most casual game developers make the mistake of creating titles that are too limited in scope, hoping to ape previous successes with a minimum of time and effort. Alchemist’s Apprentice, a hybrid match-three and hidden object outing, instead makes the opposite error, cramming in everything but the kitchen sink with mixed results.

Albeit an exceptionally lovely and sometimes engaging contender, it’s also one that could stand for a little more focus and gameplay polish.

At first blush, you’ll immediately be struck by the beauty of the offering’s visuals, a mix of stunning, hand-drawn character art and gorgeous backdrops. Even the title screen, depicting a magician and a wolf basking in the moonlight, features delicately swaying branches and rippling robes that flutter in the simulated breeze.

But you’ll also be instantly struck by obvious chinks in the adventure’s armor, a running theme throughout the experience. See: The unremarkable storyline itself (a fledgling conjuror’s asked by his uncle to restore a remote province in said relative’s absence), handful of grammatical hiccups presented and clunky fonts used on menu buttons, which detract from the tale’s charm.

As for actual play, the excitement alternates between two pretty, but equally shallow activities: Searching for scrolls, shields and swords in interactive scavenger hunts, or attempting to match groups of symbols and coins. The former vignettes, which see you simply sniffing out a given type of object, serve as occasional interludes between puzzle-solving segments, yet impress more for overall visual caliber than any inherent depth or ingenuity.

Likewise, the latter sequences, which make up the bulk of the quest, are also eye-catching, but fairly rudimentary from a game design standpoint. The goal here: Swap two items at a time (located on a grid-shaped playfield) to assemble groups of three or more identical objects, collecting coins or removing colored tiles in the process. Either should prove instantly familiar to veterans of the casual gaming space.

More noteworthy is the collection of oddities and extras inherent to the package. For example: The ability to build and upgrade mysterious buildings between missions that lend you special powers (e.g. additional time or fireballs and lightning bolts that destroy whole sections of tile) or recruit helpful allies. Don’t forget the bonus coin-collecting mini-games (wherein you make a leprechaun run back and forth collecting falling loot) accessible by retrieving a set number of tokens either.

And then there’s the number of nifty bonuses which appear on puzzle boards themselves, randomly swapping out certain jewels or providing fuel for your power-ups. (Most of which seem to target the board randomly, and not always to your clear benefit, to boot.) All told, there’s a lot to keep track of here, much of which isn’t well-explained or -implemented.

Still, the most pressing concern here are actual stage objectives, which range from the lengthy (i.e. collect 90 coins) to outright infuriating (grab 100 coins while also eliminating all colored squares), and show little imagination, especially early on. Worse, even with the ability to spark off giant combos (the best of which award players collectible trophies), due to the title’s random nature, there’s no telling if you’ll get the pieces you’ll need in a timely fashion.

In an ironic turn, bonuses can also be a pain in the butt as well. There are only so many tiresome mini-games and canned animations you’ll be willing to stomach, as much effort as it takes to sit through even early levels already.

Label the outing schizophrenic: It’s as if the title’s art and design teams couldn’t come to a successful resolution, and instead met somewhere in the middle with mixed results. A real shame, that… stunning as it proves from an aesthetic standpoint, we certainly wanted to love Alchemist’s Apprentice.

Alas, by trying to do so many things at once, yet none particularly well, the creators of Alchemist’s Apprentice fall into another all-too-common trap, assembling a beautiful and wide-ranging, but ultimately shallow and passing diversion.

If you liked this game, try Faries, The Treasures of Montezuma, and Azkend.