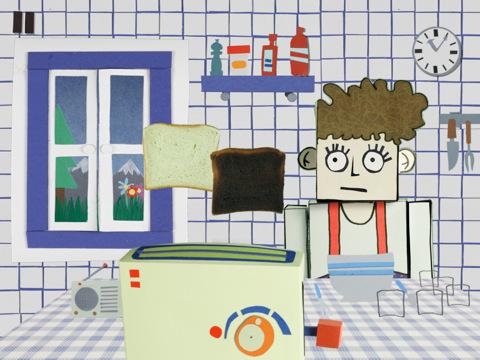 Albert is gorgeous, fun, and much too short for a mini-game collection

What sort of things do you do every day? Wake up? Make breakfast? Walk the dog? So does Albert, and the developers at FingerLab want you to join him. Albert is a mini-game collection that takes you through a day in the life of its titular character, from sunrise to sunset.

Unlike most mini-game collections that you’ll find on the App Store, Albert manages to offer up a great deal of variety in each of its experiences. One mini-game may have you frantically turning off alarm clocks in a frenzy of taps. Another may have you tilting your device in a bathroom game of labyrinth as you guide a bar of soap to the tub. Yet another may have you making noises into your microphone to call your dog, or blowing into it to make a nice round bubble from your chewing gum. Of the 14 mini-games included, developer FingerLab has done a great job of making sure no two play alike.

14, however, is the magic number that calls attention to Albert‘s biggest problem: it’s incredibly short. With no mini-game taking more than a minute to complete, you can easily bang through everything Albert has to offer in a coffee break. You can always try and go back to earlier levels to up your star rating, but for the most part, it feels pretty much impossible to perform to the game’s high standard to unlock a perfect 3 stars. Because of this, the replay factor here is exceedingly low.

Part of the reason for this is that the game doesn’t always work as well as you’d want it to. In one level, for example, you’re matching up pairs of socks. But if you don’t tap exactly where the game expects you to on the sock, you’ll hear a little “error” noise which seemingly docks you when it comes time to receive your rating. In a later level you’ll need to tap on falling stars, and they’re falling fast and in large numbers. Using the multi-touch screen this should be no problem, however using more than two fingers never seems to register, which makes it impossible to catch as many as you’d need.

Visually the game is an absolute knock-out. Rather than using digital illustrations, Albert‘s world was made out of thousands of pieces of cardboard assembled in a lovingly artistic way. Everything has a tremendous amount of detail and depth, not to mention a wonderfully unique sense of style. The gameplay may have its flaws, but Albert is one of those rare games that’s worth checking out merely to see how it looks. 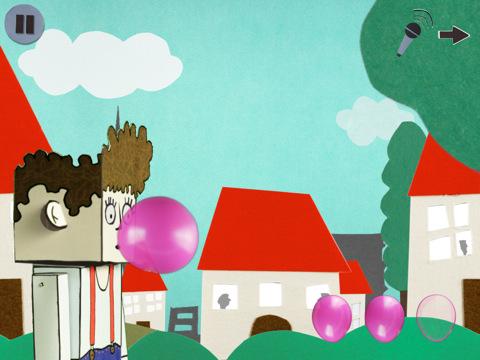 Adding to visuals is a neat faux-3D trick that’s rarely seen in gaming (the only exception I can even think of is Rittai Kakushi E Attakoreda, a Japanese hidden object game for the Nintendo DSi). Rather than having things pop out of the screen as with traditional 3D, Albert makes you feel as though you could reach right into its world. This effect is achieved by letting players push their devices to the left and right to adjust the scenery in a way that makes you feel like you’re actually looking around it. It’s a really incredible visual effect, and it’s one that I can’t believe we haven’t seen in iPhone games before now.

We were really only let down by how little this effect was used. Rather than incorporating it into the core of the gameplay, players only need to tilt their devices to look around if they want to find the bonus treasure that’s hidden in every level.

Albert seems to be a game that isn’t quite sure who its audience should be. Achieving 3 star ratings and completing some of the later stages would be just about impossible for a younger audience, yet the mini-games are too few to really appeal to adults who are looking to get the best bang for their buck. It may be a visual tour-de-force, and it may offer a good degree of variety, but Albert manages to be all too brief of an experience to whole-heartedly recommend.