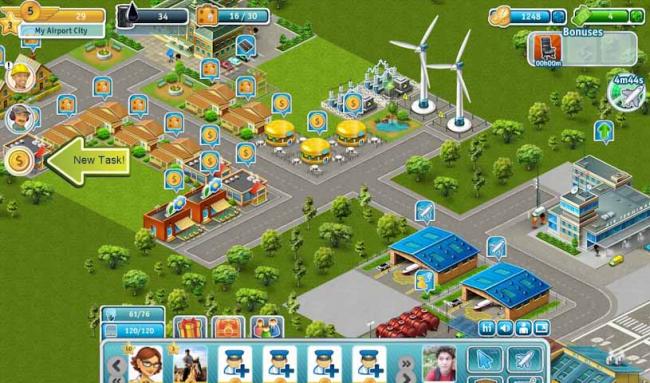 Fraught with high fares, Airport City is only good for a layover at best

Airport City makes me a little afraid of flying. It doesn’t force me to place my life in the hands of a pilot that I’ll never see, it doesn’t lift me several thousand feet in the sky without anything to support me; no, Airport City frightens me because I worry that I’ll have to fork out yet another Facebook credit every time my planes are ready to reach for the clouds. To be sure, the last few years have driven home the sad fact that financial loss is a staple of the airline business, but somehow I doubt this is what 6Waves wanted its players to think about when it designed this new social sim.

That’s not to say it doesn’t start out well, even if there’s not much to distinguish Airport City from other social sims aside from its elaborate airport aspects. You place a few houses here, you place a few hamburger joints there, and just to spice things up, you can also place a runway over yonder. If you need help, a stewardess avatar straight out of the upcoming PanAm television series will serve you several tutorial missions. Airport City may shake up the natural order of things by making the city a product of the airport (instead of vice versa), but you won’t be lost here if you’ve played one of the many other similar games on the market.

The differences spring from the airport itself. The homes you build in the city section are meant to house your passengers, who are then used to populate your airline terminal. The businesses, on the other hand, provide the bulk of your revenue. If you have enough passengers, you can use them to board a plane, which will then take flight into the wild blue yonder for anywhere from a couple of minutes to 16 hours. These airplanes also require fuel to run, so sending a plane on a flight requires pulling the plane from a hangar, filling them with passengers and fuel, and then sending it away. Occasionally you’ll receive time-limited buffs (such as ones that increases your flight or business incomes by 200 percent), and you’ll earn a modest multiplier if you harvest enough coins and passengers quickly enough.

The trouble takes off around the fourth level, when you’ll need to buy an expansion just to complete the buildings required by the tutorials. And, like everything else in Airport City, it’s expensive. Unless you’re the god of social sims, you’ll only have enough to buy one 1,000-gold plot of land, and then you’ll need to spend even more to build the actual buildings. If you don’t, you’ll need to fork out around 25 Facebook credits if you want to proceed. Airport City also makes heavy use of the “ask your friends for parts” social mechanic, although you’re never given any warning as to which buildings will require this and which will not until after you’ve built them. By the seventh level, almost every action requires paying real world cash unless you don’t mind waiting for hours or days, even if you just want to refuel your planes. 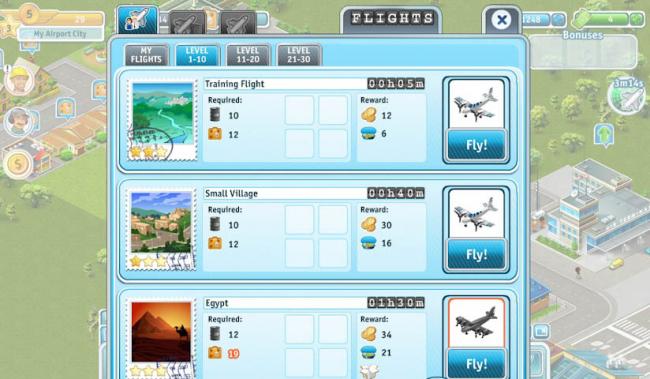 This rather greedy framework could work, of course, provided there were enough to distinguish Airport City its cousins on the market. Airport City isn’t a bad game at heart; it merely demands a little too much for what amounts to an overly familiar model with a niche gimmick. It runs well, the art design is satisfactory, and the developers have mentioned that players could see missing elements such as sound and music within the next couple of days. You can even receive helpful items via requests from friends or hire them for jobs, but don’t expect even these options to help your progression that much (especially since such requests are sometimes bugged). In the end, you might want to keep flying past this one. You just don’t get enough for the time and thought you invest in Airport City unless you’re willing to throw some serious cash at it.