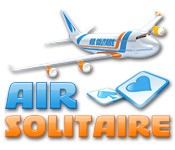 Air Solitaire is a rudimentary version of Klondike solitaire with so-so production values and no story or extras to speak of. In fact, a "flying" theme with planes and sky backgrounds is pretty much the only thing that makes this different from the free version of Solitaire that’s been shipped with every Windows PC for the past two decades.

There are dozens, if not hundreds, of variations on Solitaire in the world; Air Solitaire features the one known as Klondike, which is by far the most popular. Players build columns of cards from King down to Ace in alternating colors, turning over cards and drawing additional cards from the extras pile as needed. The ultimate goal is to end up with four stacks of cards, arranged in their proper suits (Hearts, Spades, Clubs and Diamonds) from Ace to King.

Air Solitaire superimposes the theme of air travel over the basic mechanic, to the extent to choose each of the five levels of difficulty you have to click on a different type of aircraft. (In the easiest level of difficulty you turn over one card at a time; the next difficulty ups that to two, and then three, and so on.) Once you’re inside a game, the air theme is continued through backgrounds that depict dully rendered skies and clouds at various times of day.

In terms of mechanics, the game is basic solitaire free of any bells and whistles. Players can undo as many moves as they wish, and restart a new game at any time. Something that is a bit unusual is that when the game senses a move that can be made, the cards automatically move to the appropriate spots. In some cases, where more than one move is possible, you’ll actually have to click and drag the cards yourself, but for the most part you can just click on a card and it simply flies to where it should go – making the experience seem even more mindless and automated than usual.

I liked the fact that if I was playing the game in Windowed mode I could actually resize the window to be as big or small as I wanted – something isn’t always possible in other games. Overall, however, Air Solitaire doesn’t offer enough depth to justify buying it when you can easily find solitaire games with the same features and similar production values for free.