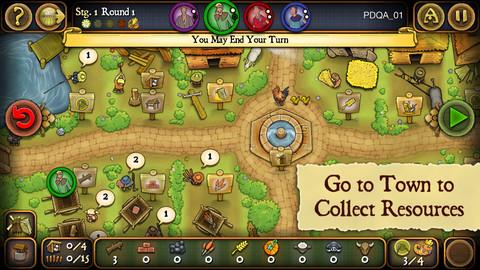 Muck raking has never been so much fun.

Depending on who you listen to, Agricola might be the best board game ever. A very substantial portion of the hobby gaming community certainly thought so for a long time, and it’s almost undeniably the apex of the heavy, non-random worker placement genre. Now you can decide if you agree by checking it out on iOS.

Each player in the game runs a medieval farm. Workers are assigned to a task such as gathering one of many resource types, and spending them to build upgrades to the farmyard or even to new family members. Selecting an action blocks it temporarily from the other players. So far, so very typical of the worker placement genre.

Where Agricola earns its pedigree is with the semi-random order in which the various actions become available, and the large hand of randomly dealt upgrades that each player has. These ensure that every game is different and that it’s harder for typical repetitive strategies to take hold.  They also mean that the possible decision tree for the game is vast beyond imagining: the leafy boughs obscuring the optimal course of action. That makes it fun and challenging for humans to play well, but it also makes it extremely hard to design a good AI. And, unsurprisingly, the AI in Agricola is pretty feeble.

That’s less of a problem than it is for most board game conversions though. For starters, Agricola has a tough but entertaining set of solo rules where you must overcome an increasingly difficult set of challenges. It also plays well asynchronously, and developers Playdek are famous for their excellent online implementations. Aside from a slightly annoying new custom layer over Game Center to navigate, that reputation remains intact here.

Another notable thing about the board game is the vast amount of information you need to assess. All players will have to manage a starting hand of 14 cards, a farmhouse and fields, and a collection of resources. Then there’s also the main board where you place workers to take actions. It’s an awful lot to cram into an iPad screen, let alone an iPhone. But Playdek have somehow, miraculously, not only made it accessible but delightfully charming in the form of a town square with surrounding farms: all furnished with little animated workers and animals. Different screens are used to hold your farmyard and the various cards, and it’s all accessible when you need it, even on the smaller devices. 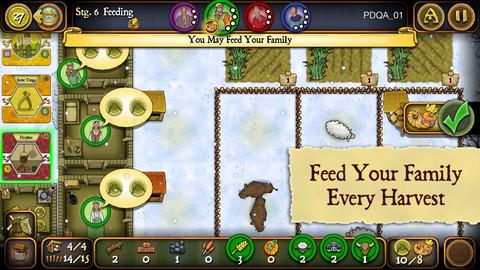 However, with so much information to deal with, some casualties were almost inevitable. In this case the big omission is finding out what your opponents are doing: information which isn’t always necessary but helpful if you want to maximise your strategies. There’s also some minor usability niggles: an excess of dragging when tapping would do, and the failure of help icons to open automatically on newly-revealed features.

With all of those play elements, you’d expect Agricola to be fairly complex, and you’d be right. There’s an interactive tutorial to run through, broken down neatly into stages, which should be enough for anyone passingly familiar with the worker placement genre to pick up the game. Complete neophytes may struggle with it a little, although to be honest, they’re probably better off starting with a lighter game like Stone Age. However, veteran board gamers might be a little disappointed, not only with the poor AI but with the omission of several of the card decks used in the original game. The roll call of missing cards includes my personal favourite, the “I” deck, which increases interactivity.

Certainly the amount of programming required to support all the possible permutations would have been considerable, but given that the variety of cards on offer is an absolutely key part of the board game’s appeal, this is an unfortunate oversight. Apparently these decks may become available as IAP further down the line, along with some of the game’s many expansions. 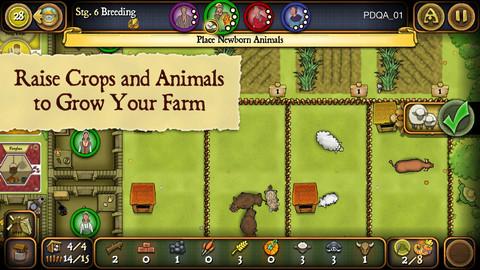 Bringing Agricola to the small screen was a very tough task. Playdek has tried extremely hard and managed to come up with something that’s a lot of fun, but does fall down in a couple of key areas. But for experienced gamers wanting to play online, fans of the solitaire variant, or those who simply want to find out what all the fuss is about, this most-talked-about board game should be picked up without question.