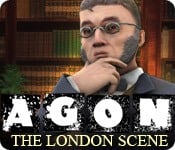 The year is 1903. A London professor receives a mysterious letter. It is night. Strange artifacts have arrived at the Museum of History. Can you help Professor Hunt unravel the mystery of the Black King before morning? This is the challenge posed by AGON: The London Scene, the first in a series of point-and-click adventure games that place you in the shoes of a turn of the century British professor and adventurer.

Played from the first person, Professor Hunt’s inaugural adventure offered very little in the way of variety or excitement. The entire game is played almost entirely within the confines of the museum’s offices and hallways. The majority of your time with AGON: The London Scene will be spent not with puzzling out the game’s ingenious challenges, but navigating through these rooms with the aid of a blindingly frustrating control scheme.

The team behind AGON was clearly trying to emulate the controls behind classic first-person puzzlers like Myst, but sadly fell short of this goal. Rather than giving true first person control that allows the player to handle movement in a real time environment, you’re tasked with choosing a forward arrow or a backward arrow as they appear on screen. This means that a simple task such as walking to a desk might mean you need to find where the forward arrow will be active and click on it four times, despite the fact that the desk is clearly in your vision the entire time.  The terrible control scheme will really limit the amount of time you’ll want to be exploring, which in turn can cause further frustrations down the road because you may not have discovered items you’ll need.

Further adding to the frustration is that movement is the central task you’ll be doing in the game. Going up and down the stairs takes an inordinate amount of time because of all the clicking involved, and yet you’ll need to do it half a dozen times or more. Each piece of a puzzle, each clue always leads you back to another room. And you may find yourself making the trip more than once because AGON: The London Scene doesn’t feature an activities log of any sort. You could easily discover a phone number or a room number from one document and forget the number by the time you get to the room you need to be in to enter it. I can’t imagine why these things don’t appear in some sort of a journal or quest log. It’s frustrating beyond belief.

What’s really disappointing is that, once you peel off the outer layers of terrible game design, the puzzles in The London Scene are actually quite brilliant. Rather than simply realizing that A goes with B as it often this case in point and click adventures, you’ll really be tasked to figure out some great challenges. In one instance you’re required to sort keys based on random information gathered about the different rooms they’ll open. The solutions always make sense, and they always feel rewarding to complete.

The characters in the game come across as fairly well polished too, each performed by personable voice actors that can keep you hooked on what little story is present. Sadly, there aren’t that many puzzles to be had as the adventure is over just as soon as it begins. Seasoned puzzle veterans will be able to clear through the first episode of AGON in well under 2 hours. By the time all is said and done developer Private Moon Games has stated that AGON will be made of 14 episodes. When put together or taken in larger chunks, that should make for a pretty meaty adventure. As it stands now though, things just end far too quickly for the $9.99 price of admission.

Despite the paper thin nature of the plot and ridiculous controls, I still found myself eager to check out the next episode. The puzzles were solid and there was just enough story to whet the appetite. Still, given how quickly many will be able to complete this game and how incredibly frustrating the controls are, AGON: The London Scene just isn’t going to be for everyone.