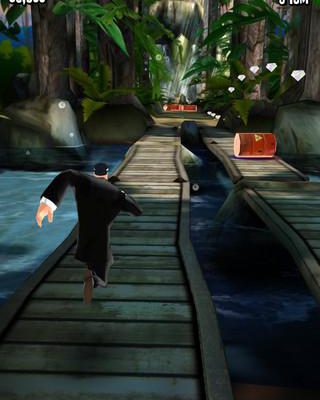 Endless runner games have been regarded as “casual” for quite some time. And while their simplistic structures and primary existence on mobile platforms (rightly) perpetuate that, it isn’t necessarily true of every game in the genre. Take Agent Dash, for example. It adheres to nearly every endless runner trope out there, but where difficulty is concerned, it’s anything but casual.

Like Temple Run and many other 3D endless runners, the core gameplay in Agent Dash revolves around leaping left and right. Indeed, if you want to dodge obstacles and get to where you need to be, you’ll have to. And this takes me to the most interesting part of the game: You aren’t seeking refuge from any sort of monster giving chase, rather you’re seeking out enemy bases and trying to destroy them. It doesn’t change the gameplay much on a mechanical level, but it does make everything feel a little more cool.

As luck would have it, the controls are on your side throughout all of this. Moving left and right requires but a swipe, and it’s the same story for jumping and sliding. The game is incredibly responsive to your input, a fact it takes advantage of by bombarding you with an absurd number of obstacles. I’ve played a lot of endless runners in my time, but this just might be the most difficult.

And it’s not just the obstacles that you need to watch out for. There are many instances where you have to abruptly leap to the left or right to avert falling through a hole, and some areas where you must contend with crumbling floors. I realize neither of these situations are new to the genre, but Agent Dash doesn’t give you as much time or warning as most other titles. I know not everyone will see merit in that, but the ramped-up difficulty is exactly what kept me coming back. Every time I failed to enter an enemy base and shoot it to pieces, it felt as though my pride was being insulted. 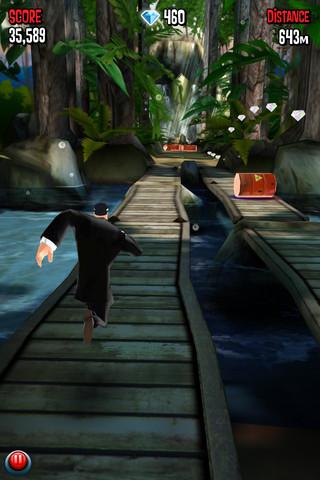 In some of my more frustrated moments, I turned to the game’s gadgets and boosts. The jetpack, for example, causes your agent to fly upward for a finite period of time. There’s also a magnet that scoops up any and all nearby gems – the game’s currency – when you pass by them. You can always just purchase gems through the in-game store, but at no point will you be obligated to do so. A good run in the game can land you around 300-400 gems, which isn’t far off from how much is required to upgrade your character or purchase one-time boosts.

What Agent Dash lacks in originality, it makes up for in solid design. Its controls are responsive, the graphics are some of the best I’ve seen in an endless runner, and the gameplay doesn’t pull any sort of punches. It’s a great game to kill a few minutes each day with, but don’t be surprised if its difficulty inspires you to play it for longer than intended. It can get oh-so frustrating when you die repeatedly, but that only enhances the reward that comes with having a good run. You’ll laugh, you’ll cry, and you’ll throw your iDevice in a fit of anger.