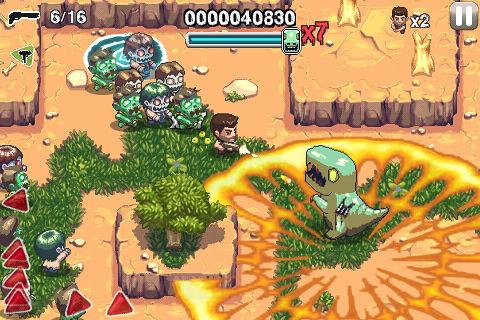 Remember Barry Steakfries? Sure you do! He was the star of this summer’s Canabalt meets Rambo game, Monster Dash. Now Barry’s back, and we finally learn just where he was dashing off to. Don’t expect to be doing too much running this time around though, as Barry ditches his sneakers for a submachine gun in the action packed shooter Age of Zombies.

As we learn in the opening cinematic, Barry Steakfries last adventure in Monster Dash served as little more than a precursor for the zombie slaughter to come. Monster Dash, it seems, was an elaborate trap meant to keep Barry from stopping the evil Dr. Brains from sending zombies to different eras in time. And it looks like Dr. Brains evil plan has worked! Barry arrives moments too late and sets off on a time travelling twin stick adventure, ready to obliterate any zombie that stands in his way.

While it’s been tried a few times before on the iPhone with somewhat mixed results (veterans of Pirate’s Treasure know what I’m talking about), Age of Zombies manages successfully features multiple levels and a story with a distinct beginning, middle, and end. Players will do battle in five different time periods, each with 3 stages and a boss fight, bringing the grand total of levels to 15.

Each level takes place on its own unique map, so no two ever play the same. Players will blast through a predetermined number of zombies to progress, collecting and using a variety of weapons along the way. Flamethrowers, submachine guns, shotguns – the standard shooter arsenal is here, but alongside it players will also be able to use secondary weapons. Items like grenades, mines, and bazookas can be triggered by tapping a little button located right about the right touch stick.

Gameplay here is tight, fast, and crazy fun. Zombies will spawn from all corners of the board, which means you may be running away from one horde right into another. Leading them around the map, you can often trick these baddies into forming a large mob that you can make short work of with a couple of well-timed grenade throws. Each map has its own little obstacles and corners to make your way around as you try to avoid becoming lunch. Learning all of the nooks and crannies is both easy and essential; otherwise you’ll never survive long enough to track down the next big weapon.

Age of Zombies also carries the same trademark sense of humor that Halfbrick is quickly becoming known for, but unlike previous efforts, the laughs aren’t simply an occasional twist in the background. There’s a nice smattering of dialogue throughout the game, and every time Barry speaks it’s laugh out loud funny. Whether he’s making pop culture references (there’s a great Stargate zinger in the Egyptian level), using off-color jokes (expect to read the occasional profanity), or simply trying to be the king of one-liners, Barry’s dialogue really takes center stage. 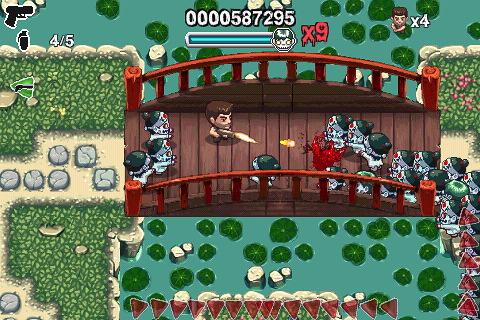 Even non-dialogue moments, like chapter titles and achievements, managed to tweak a smile out of us. There’s one award you can earn relating to a fight with a zombie T-Rex called “Clever Girl” – an obvious homage to Jurassic Park, complete with a JP-inspired badge for those who earn it. We were also tickled pink by the various Fruit Ninja references strewn around, like when Barry utters “I wish I had a watermelon to distract these ninjas” while fighting the undead in feudal Japan, or the achievement you’ll earn for completing the game: “Now go play Fruit Ninja.”

Thanks to the inclusion of a survival mode, you won’t need to “go play Fruit Ninja” any time soon. After completing a world in the main game, you’ll unlock its survival mode counterpart where you’ll do battle with endless waves of zombies. If you’re looking for a mode that will challenge you for as long as you’re willing to commit, you’ve absolutely found it.

And it’s a good thing, too. With no one stage taking more than 5-7 minutes to complete, players who make it one from start to finish in one sitting will easily wrap the story mode up in only an hour or two. Thanks to the survival mode this really doesn’t sell the package short, but it would have been nice to have played in the story mode a little longer. Then again, Halfbrick is well known for supporting their games with new content well after launch, so maybe we’ll get to visit more time periods in the main adventure after all.

Twin stick shooters have become something of a mainstay on the iPhone, but that doesn’t mean we see ones that stand out very often. Halfbrick has once again proven themselves the masters of everything they touch, offering up an experience that’s familiar yet distinctly their own. If you love twin stick shooters but find yourself disappointed by the cookie cutter experiences that keep popping up on the App Store, make Age of Zombies your next purchase.