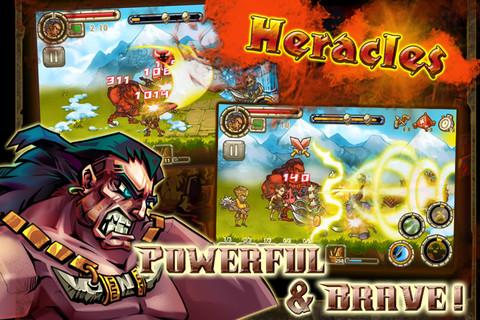 Life as a god must be pretty great. The whole “all-knowing benevolence and unmatchable power” thing is a pretty sweet gig. Today, gods generally get along pretty well (though the same can’t always be said of their followers!). Anyone familiar with Greek mythology can tell you things in the godly realms weren’t always so great though. Wars amongst the powerful figures were common. Yet there may be no battle in the mythos as brutal as the one depicted in Age of Myth. This Athenian era fighter will have you playing the role of a hero in Zeus’s army. But is it a heavenly fit on your mobile device, or does this title belong in the netherworld?

In Age of Myth, players encounter characters that any person that took a Humanities course would be familiar with–Zeus, Appollo, Hercules, and more. Not surprisingly, Hades also has a hand in things, as a conspiracy between he, Thanatos, and Poseidon threaten the throne of Zeus. The game takes kicks off after a massive disaster that opens the Abyss Gate, no doubt with help from the previously mentioned villains, which in turn welcomes on to the island of Crete all the terrors of hell and beyond.

To send these creatures back to where they came from, you’ll take control of a hero–either the Warrior, Archer, or Mage. Your choice will have a deeper effect as you build up your stats using an upgrade system that defines a distinct play style. You’ll also take some servants into battle with you, making sure you’ve got enough support to take on the onslaught of hell-sent abominations. These support characters can also be leveled up to maintain a consistent degree of usefulness. All upgrades are done by using game gold or the always available premium currency, which will cost you money not from Ancient Greece. The stronger these support units are, the easier your fights will be. Meanwhile, though character building is done in tower defense style (click to upgrade), battles are a little more live-action, with on-screen buttons that will unleash your attacks as you move through the battlefield. 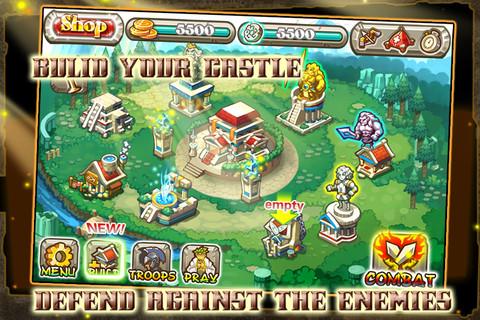 These battles don’t offer anything particularly new in the form of action game expectations, however. You’ve got your abilities laid out on the screen, baddies come at you and you systematically, and you have to stop them from advancing. The only real strategy that takes place during fights comes from balancing your attacks, which have a designated regeneration period after use. As far as unique additions to gameplay, it’s worth noting that you can actually destroy the area that the enemies spawn from rather than waiting to eliminate them one-by-one. Obviously the portal is stronger than any one character, but with a strong enough attack it has the potential to shorten the rounds considerably.

While the previously mentioned support characters can be upgraded with currency, recruiting them to your team requires food. And joy of joys, you will have to farm to get the food. Not completely, of course, as this isn’t an agriculture simulation. Instead, farming is a time-based waiting game and you’ll have to sit patiently for a crop to be harvested to afford another round of back up. On one hand, this can be “social game” monotony in action, but the whole package actually provides a fair amount of strategy when you factor in the unit upgrades, hero management, and actual in-battle tactics. On their own, they are rather simple. All together, they put together a nice little chess game.

The graphics of Age of Myth definitely err on the cartoony side, with vibrant colors and stylized characters. Looking at the screenshots compared to the content might make it seem as though the art doesn’t do the game justice, but with the attack animations and fairly robust environment and character designs, it’s pretty easy to get lost in the animated mythology. We’re talking more Disney’s Hercules than Kevin Sorbo. 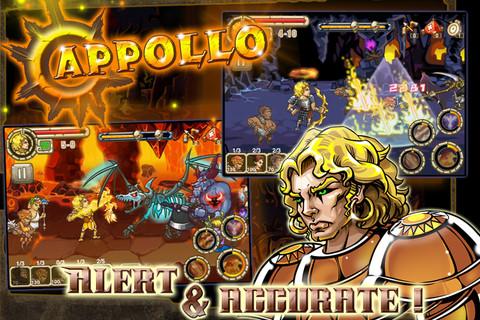 The interesting thing about Age of Myth is that no part of the game necessarily stands out as innovative or new. The battle system has been done before, unit upgrades are pretty standard, and the real-time waits for things like farming are anything but unheard of in world building games. That said, by piling these different features on top of one another and treating them like layers to a strategy, Age of Myth is able to capture a pretty solid feeling of godly warfare. You’ll have to think things out beforehand a bit, pick the right units, create the proper build, and execute efficient attacks in the heat of battle. When it comes together, it does so in a really satisfying – if not heavenly – way.