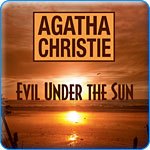 Great visuals and superb voice acting in Agatha Christie: Evil Under the Sun help counterbalance clunky game mechanics and illogical inventory tasks. The "little grey cells" may not get much exercise, but fans of Hercule Poirot will enjoy the clever dialogue and fine detail of this full-sized point-and-click adventure game.

David Suchet’s Hercule Poirot is a classic, in part because of his subtleties. Everything from Poirot’s dry humour to his desire for neatness is presented with nuance.

Although Suchet himself was not available for this title, his brilliant characterization is fully captured in the game.  Hastings also matches the onscreen work well. The interplay between them is amusing and clever.

That’s a good thing because there’s not much else to recommend this adventure.  If it takes 20 hours to complete the game, you will spend fully 10 just watching Poirot walk from point to point. No conversation, no review of what he already knows, no new clues. It takes up to 20 steps to get across the screen, but the scenes are laid out so that it can take him 100 to get from one floor of the hotel to another.

Other game mechanics are also clunky.  While Poirot is walking down a hill you can click on an area 20 feet ahead of him and he will turn and walk back up. Cursor positioning is finicky.

Inventory objects are nonintuitive. When you click on something, it goes straight into inventory. You don’t even know if it’s a document that goes into your notebook or an object that goes into your briefcase. You have to open both and search for it, then click to see what it was.

Objects in inventory are not always what they appear, either. Many must be double-clicked to enlarge them, then zoomed to release a second object.  You end up searching your own inventory far too often.   There are no instructions for this process.

There’s a clever hint system, but it, too, lacks detailed instructions. Poirot has a mysterious device on his office desk. Because the story is told in flashbacks, you may choose at any point to return to this office. Then you see a fortunetelling machine with a stack of cards. Drag the top card to the device, and it will tell you if you should Talk, Eavesdrop, Observe, Assist, or Search Room for that person. Very helpful, and very interesting design. At the end, the card goes back on the stack, and you have to figure out for yourself that you can move it to a discard pile and check another card.

There are no mini-games other than a single torn document to be pieced back together. Many inventory tasks are both illogical and boring. In spite of hotel staff that includes a beach attendant and a garageman, it is Poirot who has to fix a pair of goggles, find someone to swim to a raft, and carry rocks on the beach. And none of these tasks have anything to do with solving mysteries—they’re all just to make friends with people. This is not the Poirot fans know so well.

You will get at least halfway through the game before the murder happens, and it never does feel like the focus of Poirot’s attention. Furthermore, two overly graphic strangulation scenes strike an off note for an Agatha Christie title.

The game introduces multiple new characters and subplots, including a completely unnecessary story of treasure hunting and ghosts. Also, by the second half it loses its way as a nonlinear adventure. Poirot will ask questions he shouldn’t know anything about yet, even give people objects he has yet to put into inventory. Two of these can lead to dead ends. Make sure you pick up the magazine in the hotel lobby before heading to the mainland, or you may never be able to return. Also, once the murder does occur, speak to the hotel manager first, or you may find yourself stuck in a scene where you can neither go forward nor back.

The set-up is also unnecessarily convoluted. Poirot and Hastings are waiting out a blackout in London. To pass the time, Poirot tells Hastings about a murder he recently solved.  The story then becomes a flashback where Hastings is acting as Poirot to see if he can solve the mystery from the clues. So the Poirot that we see is really Hastings. This gets confusing, but at least it allows for some funny dialogue between the real Poirot (telling the story) and Hastings acting as Poirot.

Even with all the flaws, we enjoyed the game. Some of the new plot twists are ludicrous, but the core Christie story is there, and it entertains as always. The dialogue is brilliant, the 3D graphics work well, and the Suchet impression is very well done. As an adventure game, it’s a C- at best. As a Poirot presentation, it’s at least an A. Our suggestion for future titles would be to keep the fantastic character work, but design a mystery with more emphasis on Poirot’s mind, and a lot less on his feet!