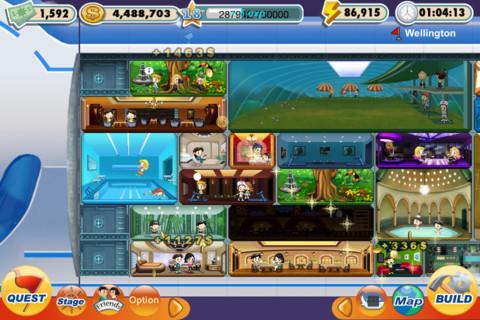 Your own private getaway… from fun.

There’s nothing quite like time off. The troubles of work behind you. Rest and recuperation ahead. Looking to capture this siesta spirit, developer Black Pearl Games has released Aero Vacation – a management title set in a world of luxury jets and constant relaxation. Unfortunately, this Chillingo-published sim feels a little too much like a trip away, complete with hours on end of nothing to do at all.

In today’s app marketplace, bursting as it is at the seams with games telling you to manage things, Aero Vacation’s concept is just novel enough to get me intrigued. You’re the proud owner of a new first-class air boat in a society full of them. Starting with a basic guest suite, and working your way up to the likes of hot springs, disco floors, and rock-climbing walls, your goal is to pack it with the best on-board entertainment this side of the sky. All the while, you jet around to exotic locations like Greece, Istanbul, and Vancouver, unlocking new resources and vacation spots in the process. At first glance, it seems like a mash-up of Tiny Tower and Nimblebit’s upcoming airport empire creator, Pocket Planes.

As you dig in, things start out just fine. The game’s tutorial introduces you to the crisp menu system, which neatly separates things like quests and items in a way that keeps important to-dos top of mind and your roster of tools uncluttered. More promisingly, though, the starter goals immerse you in a lovingly crafted world of pixelated party-goers, which seems to be full of nuance, where each business and amenity has unique benefits to the finances and happiness of another, all within confined spaces – a strategy-lite jaunt around the globe.

Like any plane ride however, Aero Vacation’s romantic facade quickly gives way to a pushy, drawn-out experience where the fun seats are tucked away behind first-class prices.

I’ve never, for example, seen a sim essentially require payment for natural progression in as quick a time as I did here. Almost immediately after the tutorial ends, the game’s goal of building an on-board hot spring had me waiting over an hour for enough revenue from my stable of rooms to turn my passengers’ luxury bathing dreams into a reality. An hour in which all I could do was click the screen sporadically; where the extent of my “play” was watching the game’s piggy bank animations rack up the necessary coin to clear space on my airship and – finally – make the big purchase. My reward? A two-hour wait to complete my hot springs.

At that point, I caved to the pressure and shelled out a buck for 250,000 coins. In all fairness, a generous amount. And yet Aero Vacation violates what I see as one of the core principles of freemium gaming: the idea that players should feel valued and rewarded for becoming payers. Sure my quarter-millionaire status was enough to get me cooking with gas, as I souped up my ship’s energy-pumping generator, upgraded my guest suites, tripled my restaurant count, and began to outfit an entire new set of rooms. 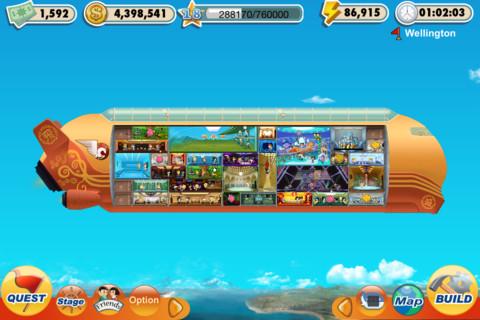 Even then, however, each in-game task carried with it a wait time that could only be surmounted by premium aero-bucks, which I was smilingly invited to buy in a separate store. Right away I felt violated. I was now a paying player, but not, apparently, a high-paying enough player to have earned a seamless game experience for much longer than ten or fifteen minutes. Instead of giving any of the in game characters social attributes to satisfy, or the ability to visit one another and interact at even a basic level, Black Pearl and Chillingo deliver an ultimatum: buy yourself time, or you’re a second class citizen. Even scarier? The idea that even, say, fifty dollars – the game’s highest in-app payment – might only maximize your ability to place rooms on screen that do nothing but replay animations.

On one hand, you could argue that this is how social games work, that I should have known what I was getting into. For me, however, that’s perhaps the biggest issue of all. It’s not enough anymore, I don’t think, for “social games” to be neither truly social nor actually games. In a competitive space where you can get titles like Tiny Tower for the same low, low price of free, games like Aero Vacation that devolve quickly into psychological check lists – that don’t have much potential for real play in the first place – are beginning to stick out like a sore thumb.

Or at least they should. Different strokes for different folks, of course, but in a mobile environment where zero dollars is fast becoming the new 99 cents, your time is the most precious resource of all. The only currency of consequence, I’d argue, in or out of any game. And when a title like Aero Vacation asks you to pay for your own time? You deserve better.