Home / Reviews / Aerial_Knight’s Never Yield [Switch] Review – Give It Up

Aerial_Knight’s Never Yield [Switch] Review – Give It Up 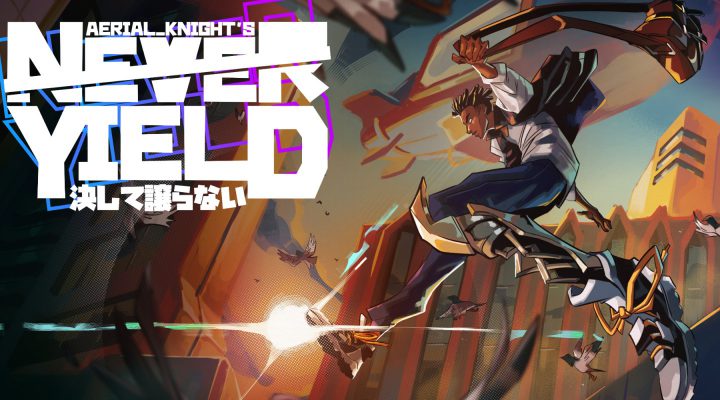 Underlying mechanics are not solid enough

Doesn't fully satisfy as a endless runner or action platfomer

Aerial_Knight’s Never Yield has arrived off the back of some hype – it took a starring role in Nintendo’s most recent Indie World Showcase, and its (excellent) soundtrack is to be released on vinyl.

Sadly it fails to live up to those expectations, offering up an experience that never satisfies and ultimately feels unfinished.

Effectively an endless runner with aspirations of becoming something greater, you play as Wally. He starts running from enemies and simply doesn’t stop across the game’s multiple levels.

The plot is never explained at the start, and slowly things are cleverly revealed as you progress.

In terms of the controls it’s as simple as you’d expect – you can run, jump, slide, and dash past various foes and obstacles via set buttons.

Time slows slightly as you approach each barrier, and you’ll eventually work out which command to press considering the object in your path. These obstacles often repeat a little too often, however.

Hidden checkpoints are scattered generously through the levels, so you’ll not have to repeat massive parts over and over.

Sadly this isn’t enough to stop Never Yield becoming a slog. Although it doesn’t relies on trial and error too much, it doesn’t seem to respect the core elements that make an endless runner work.

The visuals themselves are solid for example, but they don’t slot seamlessly in alongside the gameplay. Endless runners – especially one like this, which is telling a story of sorts – needs to feel as tight as a drum.

You have to feel like you’re flying through a real range of dangers and avoiding them by the skin of your teeth via last second reactions.

Instead every jump and slide here feels janky and uncoordinated to what’s actually happening on-screen. Often you’ll clear an obstacle you swear you should have hit, or whack into one you thought you were set to clear easily.

The game relies on you getting into a flow, but we never got into one with Never Yield – with some framerate drops also being a real problem at times.

Never Yield is an impressive technical achievement from solo developer Neil Jones in many ways – and the soundtrack is undoubtedly superb – but as a game it simply doesn’t come together.