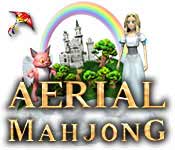 When you see the word "mahjong" in the title of a computer game, you know what to expect: It will challenge you to clear elaborate stacks of tiles by matching identical game pieces. And as you begin playing, you’ll instinctively know that in order to select a tile for elimination, it must be free to either the left or right. What you don’t know from a game’s title are the twists that differentiate it from the crowd. That’s how it works with Aerial Mahjong from Enkord, a game that plays on your expectations of what a mahjong release is and then turns them upside down.

Aerial Mahjong introduces its variations gradually, allowing you to get your toes wet before immersing you in its creative whirlpool. For example, unlike traditional mahjong, you’ve sometimes got to do more than just clear tiles from the screen to win; you might be asked to uncover a pair of ying and yang tiles, unearth a treasure chest or remove all of the gold bricks from the screen. After mastering these simple challenges, you’ll encounter earthquakes that periodically add tiles to the level you’re playing. Since the gameplay is timed, these tremors can be disastrous if you’re not good at clearing tiles quickly.

You’ll rarely get intro trouble, though, due to the next big difference in Aerial Mahjong: power-ups. If you’ve played any recent mahjong game, you’ve used bonus items before, but not in the manner Enkord presents. In their adaptation, certain tiles have a unique color indicating the kind of powerup you’ll earn when you clear it from the stack. For example, if you include a green tile in a match, you earn a hint for any upcoming move. Purple tiles allow you to reshuffle the stack.

Those two are nothing new, but some of the other powers are unique. One bonus item allows you to change one kind of tile into another, making it easier to dig your way down the stack. Another gives you 15 seconds to click on as many free tiles as you can, clearing each one from the screen. And still another triggers an electrical storm that automatically eliminates several matching pairs.

Power-ups are stored on the left side of the screen until you decide to use them, and activating them requires nothing more than a single mouse click. Thankfully, you won’t have to memorize which colors correspond to which bonus items, as a short text message explaining what a particular powerup does pops up when you hover your mouse over the powerup. Since there are 15 bonus items in all, that’s a welcome feature for lazy brains like me.

While the distinctive nature of Aerial Mahjong is fun, the powerups tend to make the gameplay too easy, trading off any semblance of a challenge to ensure your enjoyment. On most of the levels I played, bonus items were plentiful, allowing me to whittle down the stack until I felt like speeding things along, then relying on power-ups to take me the rest of the way. Also, many of the stages appear to have been built in such a way as to make matches easy to find. Plus, although there’s a timer in Aerial Mahjong, it moves too slowly on the easy and medium difficulty levels to be effective. I rarely shaved off more than half of my available minutes, even on the earthquake levels. That’s not an issue when playing the hard difficulty, though.

There’s nothing wrong with a relaxing game of mahjong, though, and if that’s what after, you’ll find plenty of it in Aerial Mahjong. Enkord included over 100 game boards that send you on a quest to find a magical mage and acquire a priceless gift. There are points in your journey at which you can choose which path you take, although the offshoots are dead ends that require you to double back to the fork in the road.

Visually, your reaction to Aerial Mahjong will depend on your tastes. While the drawings on the tiles are distinct, making matches easy to pick out, I found the overall look of the game to be a little below the quality I’ve come to expect from Enkord. You’ll still find it to be an attractive offering, though, especially if you like the sugary quality of its map and story screens. Aerial Mahjong is set in a kingdom among clouds, so the potential was there to make a jaw-dropping game.

Despite my grousing about the lack of difficulty in Aerial Mahjong and the slightly sub par graphics, I recommend the game without reservation. Enkord did a good job shaking up the foundations of mahjong through the clever use of powerups, and there’s a lot of fun to be had clearing stacks of tiles with these new tools. Just don’t expect to find yourself on cloud nine.