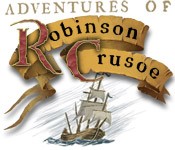 A hidden object game inspired by Daniel Defoe’s classic 18th century, Adventures of Robinson Crusoe traces the remarkable story of the title character after he’s shipwrecked en route to Africa and must fend for himself on a tropical island, gathering resources to stay alive while trying to find a way home.

The gameplay of Adventures of Robinson Crusoe is a typical blend of hidden object challenges, mini-games, and inventory puzzles where you must pick up an item then use it somewhere else in the scene to reveal the final items on your list. Sometimes the list of items to find are random, and other times the list is themed: for example, you might be asked to find “all the hand-held weapons.”

You’ll start by investigating the wrecked ship for provisions, and when Robinson stumbles onto the ship’s blueprints he hatches an ambitious plan to reconstruct the ship and sail home. As you complete each of the game’s six chapters you’ll get to return to the shipyard and see the ship’s progress based on the materials you’ve collected.

To find building materials for the ship (not to mention food and other essentials for Robinson), you’ll explore different scenes all over the island, including the beach, a lost temple, a forest, and a swamp. Eventually Robinson will even discover that he’s not alone on the island after all.

The game can be played in either Survivor or Relaxed mode. Relaxed offers no countdown timer, and more hints (10) per chapter.

The story is interesting enough whether you’ve read the novel or not, but the scenarios are occasionally a bit silly. For example, in one of Robinson’s narratives he says: “My village is located on this beautiful hillside… but before I can go there, I need to find 15 mushrooms!” which doesn’t make a whole lot of sense.

The puzzles themselves were fun, and I appreciated unique touches like having to move an object out of the way with the mouse in order to reveal something hidden underneath. The very first puzzle is an example of the ingenuity you’ll encounter: in order to find the “black seagull” on my list, I had to pick up a “clean stick,” rub the stick inside a cannon to get it covered in coal dust, then rub the “dirty stick” onto the seagull to turn it black.

The mini-games are enjoyable as well. I especially liked the sound-based mini-game that involved matching two birds based on the different tweets they made (for hard of hearing gamers, there’s also an accompanying visual cue so you won’t get stuck). That said, another of the sound-based puzzles later on that involved playing back a melody on a flute went a little over the top in the difficulty department. The game, however, does allow you to skip mini-games occasionally if you don’t feel like doing a particular one.

The game’s classical soundtrack works well within the setting and theme.

I only wish that Adventures of Robinson Crusoe was a little longer, since it clocked in at around 3 hours for me. Overall, though, it’s a decent hidden object game with some clever and thoughtful twists.