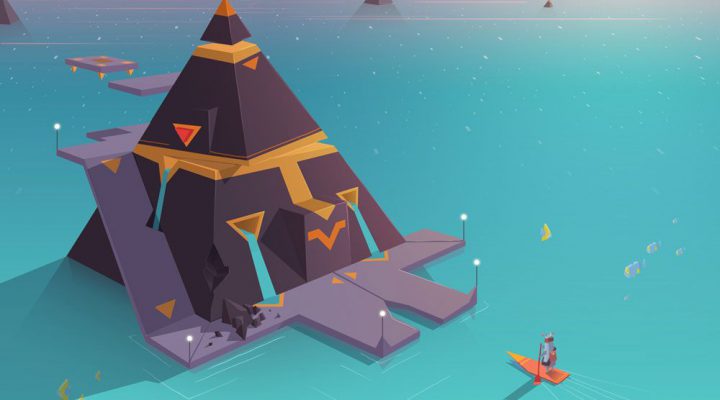 Beautiful and thoughtful combination of the game’s soundtrack and surroundings.

Clever interactive environments that allow the player to take part in the music.

Adorable and likeable characters and an especially lovable protagonist.

Without a role in the gameplay itself, interactive musical elements sometimes feel tacked on.

Adventures of Poco Eco is a musical playground. As the collaboration between developer POSSIBLE Games and artist iamyank for his latest album, “Lost Sounds,” the soundtrack is intimately weaved into every thread of the world’s fabric. Although technically a puzzle adventure game, Poco Eco is really an exploration of this soundtrack-as-world and an ingenious new way to experience music.

This makes an evaluation somewhat straightforward: if you like “Lost Sounds,” you’ll enjoy Poco Eco. 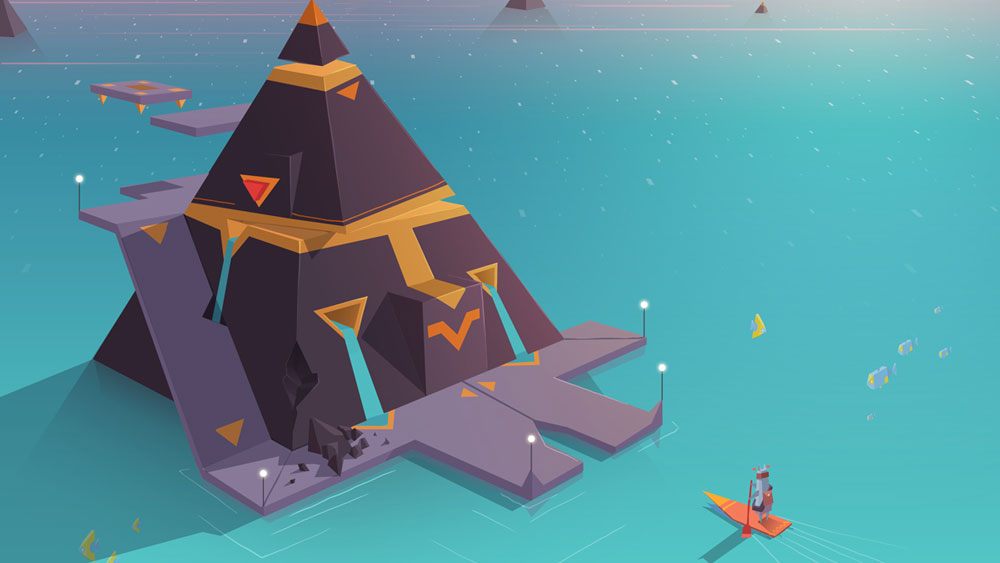 Poco Eco begins when our eponymous hero and member of a bear-fox-like tribe of people falls off a small cliff and uncovers “the lost cassette.” After strapping itself to his chest and adorning him with what appear to be prominent earbuds, the cassette and Poco Eco surf off-island to commune with a constellation spirit guide. The guide, LOWHBAZZ, asks Poco to return the Sounds to the Totems of his world and bestows him with a pink fairy helper, LEDBUG. Poco surfs off to his first destination and his musical journey begins.

If this lead-in sounds slightly ridiculous, it’s because it is. Despite its gorgeous and epic Monument Valley-esque environments and structures, Poco Eco does not take itself too seriously. It is silly and playful, with great spirits that speak in internet slang and other bear-fox creatures lounging around the stages like laidback day trippers. Poco himself will often take a break to pop-and-lock or wail on an air guitar.

Between lovable moments like these, players will guide Poco around fourteen different areas while solving environmental puzzles. The goal on each stage is to first flood the “Amp” with music, which activates any buttons or other puzzle-related objects. Poco can then freely traverse the area in search of its Totem spirit.

Puzzles in Poco Eco are extremely straightforward and primarily involve stepping on buttons to raise walkways. Rarely something trickier will come up, like revolving crystals to reflect light beams, but the majority of the journey is no more mentally tasking than figuring out whether you need to step on button A first or second.

The detailed and sometimes maze-like environments could have presented a challenge, but your fairy guide, LEDBUG, will always float over the next path you need to take. This is a welcome constant, as wandering aimlessly around the beautiful but abstract environments would not have added much to the experience. However, this means both movement and the puzzles are too simple to be considered the primary draw here. 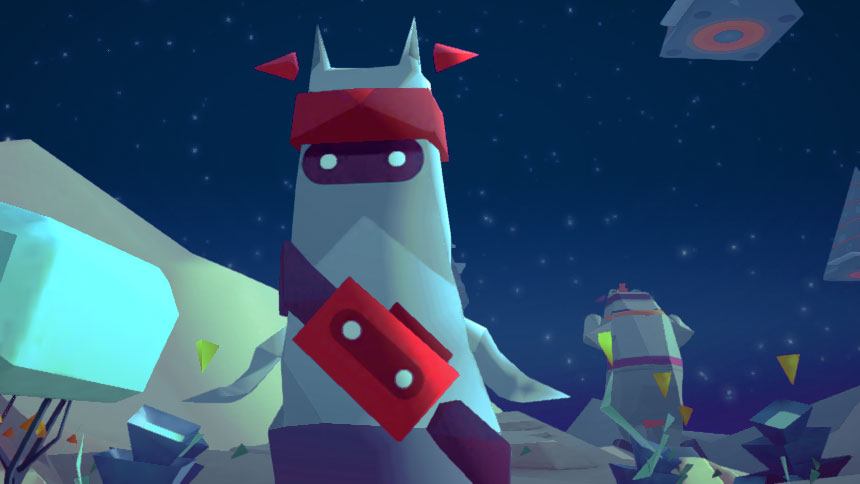 That honor belongs to the music and the melodiously-designed world itself. Every stage in Poco Eco is built from and in support of its theme. Elements throughout the world will produce different musical tones when tapped, allowing players to contribute to the current song as they play. The Salty Lowlands has subwoofers sticking out of the rocky canyons, adding a deep bass thrum to the electronic tune. The Field of Drums features acorn-shaped drum kits complete with clanging cymbals in support of the constant beat. The nearby Antler Lake expands upon the Field’s song by adding cattail-like drumsticks that make a wooden tap upon touch. There are so many musical environmental elements that sometimes you’ll inadvertently tap out a tune while trying to direct Poco to a new location.

Exploring these interactive details and the cleverly designed areas around them is so enticing that it’s a shame they aren’t incorporated into Poco Eco’s puzzles. Although the bright pink buttons maintain clarity of what’s required, it’s a bit of a waste that you could go through the whole game without pounding on a drum or adding to the melody. As Poco bobs his head to the beat, it’s obvious he is musically invested: it would be more rewarding if his actions contributed aurally instead of just physically, if the musical flourishes were integral instead of additional. 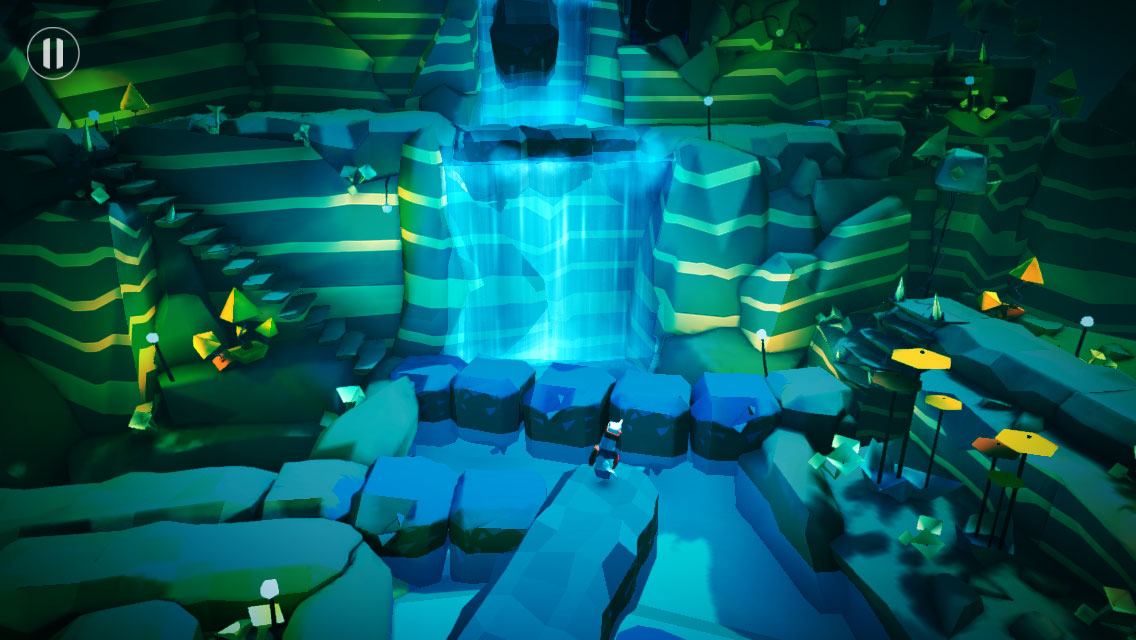 But for the attentive explorer, for the player who takes the game at their own pace and stops to smell the drum sticks, Adventures of Poco Eco will be a rare treat. Its playful exploration of iamyank’s album is a loving tribute to music as a whole. Its endearing protagonist and his bizarre journey provide an extra push from cool to catchy. It’s a game you won’t be able—or want to—get out of your head.