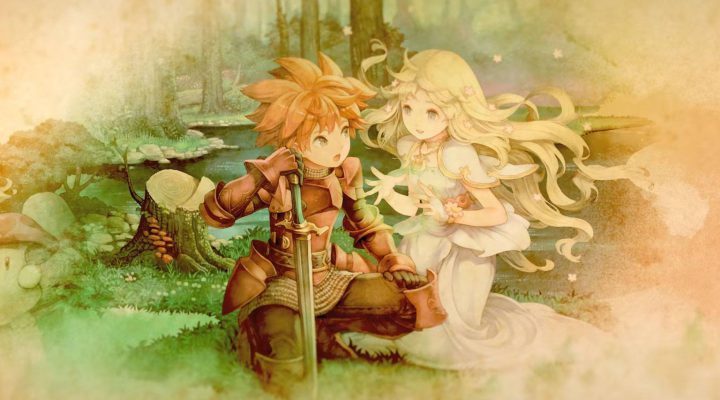 All the charm and simplicity of Final Fantasy Adventure recreated in lovely 3D.

New HUD and shortcut menu makes equipment and magic use much more enjoyable.

Gameplay is as fun as ever, thanks to the various weapons, spells, and companions you gain throughout.

Old item inventory system still in place, resulting in a lot of unnecessary item management and potentially backtracking out of a dungeon to buy keys.

Dungeon layouts are not especially interesting or unique.

In 1991, Square released Final Fantasy Adventure on the original Game Boy (Seiken Densetsu in Japan and Mystic Quest in Europe). This action-RPG offshoot of their flagship series soon became its own brand, resulting in a dozen games to date across eight different platforms. Now known as the Mana series worldwide, entries like Secret of Mana on the Super Nintendo and Legend of Mana on the PlayStation have defined most fans’ expectations of later installments. But it was Final Fantasy Adventure that set the stage for what was to come, combining the RPG growth system of its sister franchise with the on-screen action of games like The Legend of Zelda in an entirely new world populated by dwarves, rabites, and the villainously alluring power of the Mana Tree.

Adventures of Mana is, essentially, Final Fantasy Adventure. It’s been given a graphical overhaul and a few modern concessions, but this “new” Mana game is as close to a faithful remake as you can get without being called a port. Fans of the original may cautiously remember playing Final Fantasy Adventure’s other “remake”—Sword of Mana on the Game Boy Advance. Sword of Mana took plenty of liberties with the plot and gameplay, to the point where it was more a reimagining of its inspiration. Some argue its expanded dialogue and cut scenes added little more than time to the experience, and reduced the simplicity and straightforwardness that worked so well for the original on Game Boy. 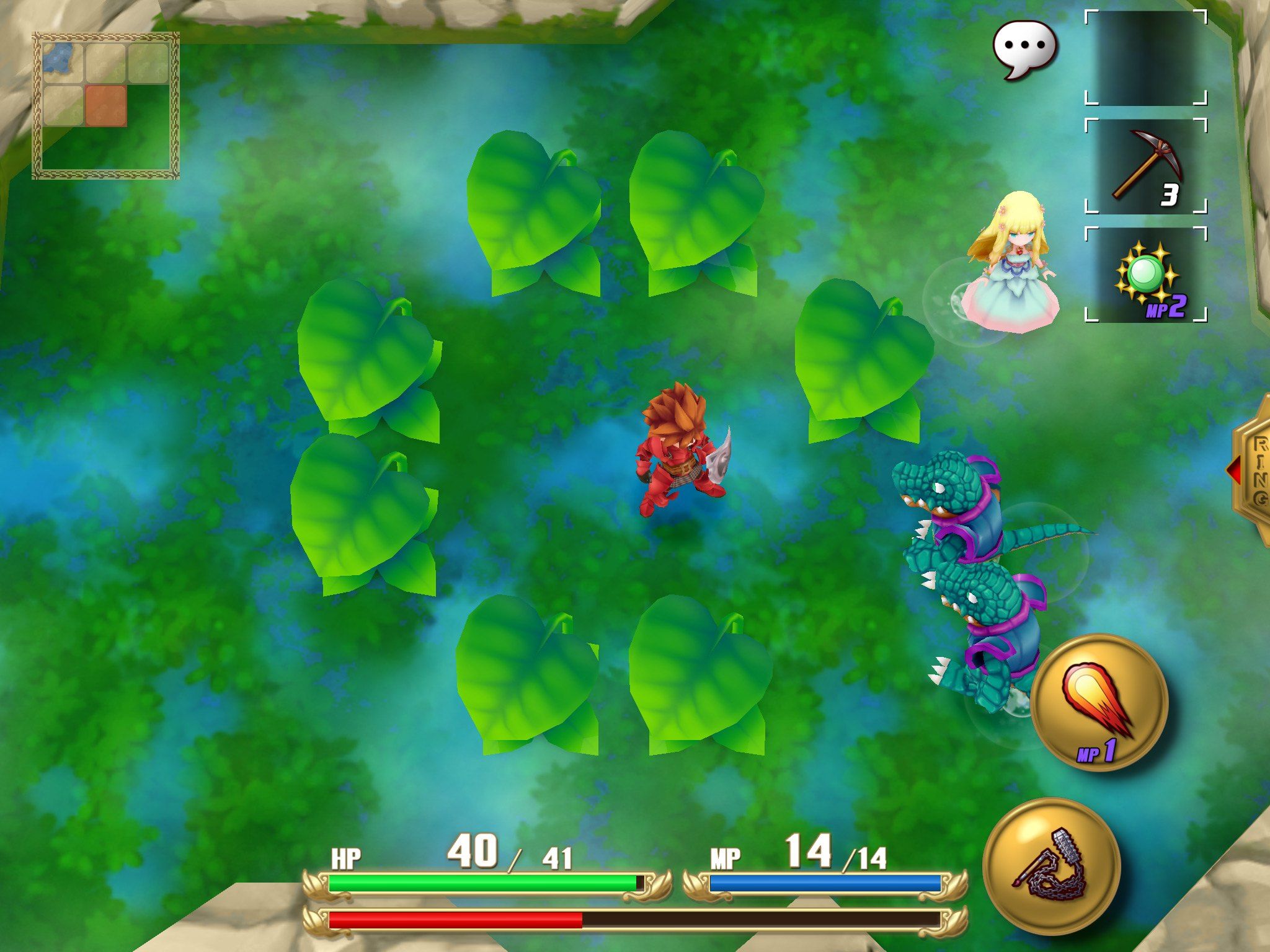 This simplicity works well on mobile, too, and is retained fully in Adventures of Mana alongside the same plot, characters, dungeons, and even enemy locations and weaknesses. If you were a fan of FFA and are looking to relive that experience, AoM is an easy choice. It’s more of the same, literally, with HUD updates that allow you to focus on action over inventory management and a quicksave system that keeps near-constant records so you don’t have to.

But what if you never played Final Fantasy Adventure? Does an almost direct remake of a nearly 25-year-old game still stand up today? In the perhaps slightly biased opinion of this reviewer—who adores Secret of Mana but didn’t play FFA until this week—the answer is a resounding yes. 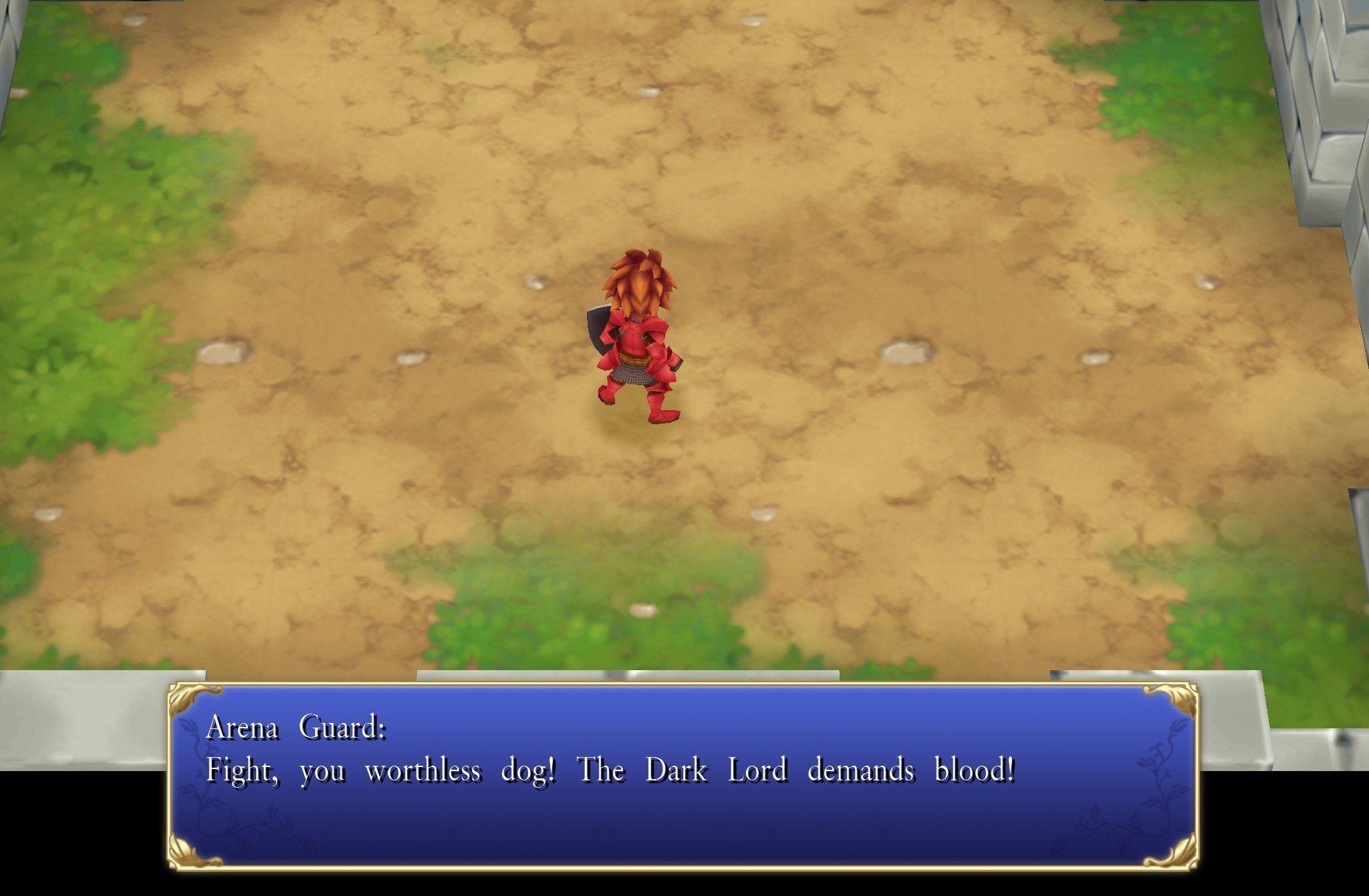 Adventures of Mana begins when our hero—whose default name is Sumo, but who can be named anything you choose—escapes from his life as a forced gladiator fighting for the amusement of the Dark Lord. Upon fleeing, Sumo overhears the Dark Lord speaking with his right-hand mage, Julius, about his plan to harness the power of the Mana Tree. The Dark Lord catches Sumo eavesdropping and knocks him off a waterfall to keep his plan a secret.

Sumo survives the fall, landing in a forest far below the Dark Lord’s castle. He soon comes across a young girl, Fuji (again, only her default name) and saves her from a pack of monsters. In the attack, Fuji’s guard is mortally injured and Sumo agrees to continue taking her to her destination, the town of Wendel. Both of these heroes have much greater roles to play in stopping the Dark Lord from stealing the Mana Tree’s power, and much of the game involves uncovering and fulfilling those destinies. 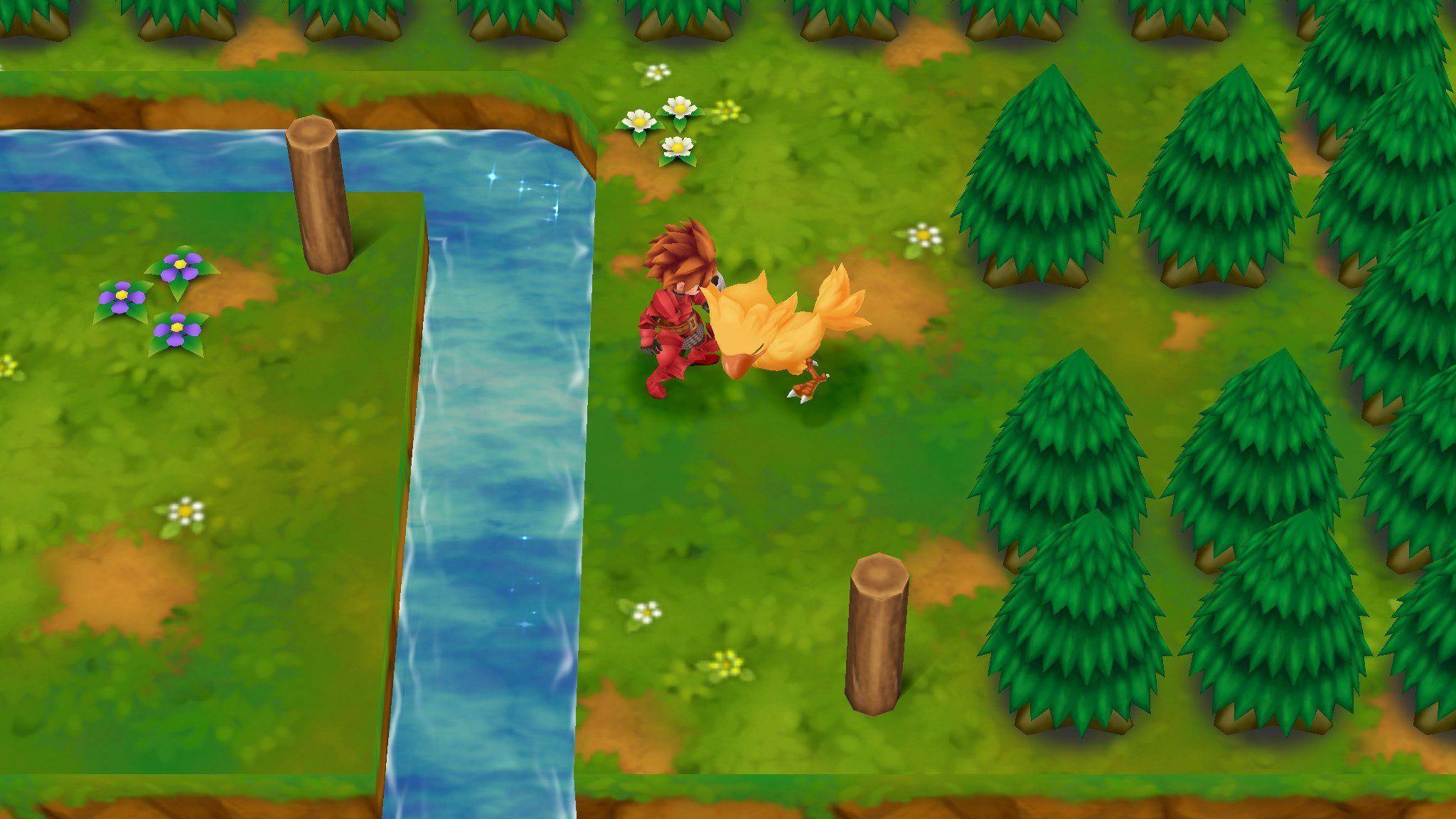 Despite an epic, save-the-world plot, Adventures of Mana is classically streamlined from start to finish. Plot points are introduced with a few lines of dialogue and Sumo is almost always on his way to the next destination. Although he travels with Fuji for certain parts of the game, other characters will come and go with little more than a name introduction and a nod farewell: in this way, Adventures of Mana is most reminiscent of Final Fantasy Mystic Quest (the North American one) or Final Fantasy IV, both of which had no qualms about pairing you with someone new and then killing them off a dungeon or two later. And yet, the succinct writing is done well enough that even after your short time with a partner—whether it’s a dwarven outcast, a friend from Sumo’s past, or a loyal chocobo—it’s easy to feel loss at their leaving, even if they merely went home to make room for your next companion.

Whether traveling alone or accompanied, Sumo’s experience is roughly the same: he’ll follow the fairly linear overworld map between towns and dungeons, usually in pursuit of a new item/weapon/magic that will accomplish his next short term goal (which is often rescuing Fuji, who gets kidnapped a lot). Enemies roam the map and can be encountered at will or avoided entirely, although slaying monsters does award experience points that are used to level up and improve your stats. Players get to choose an area of expertise at each level up, enhancing its associated stats even further: Warrior for physical attack, Monk for defense and HP, Mage for magic attack and MP, and Sage for faster increase of the weapon limit gauge. 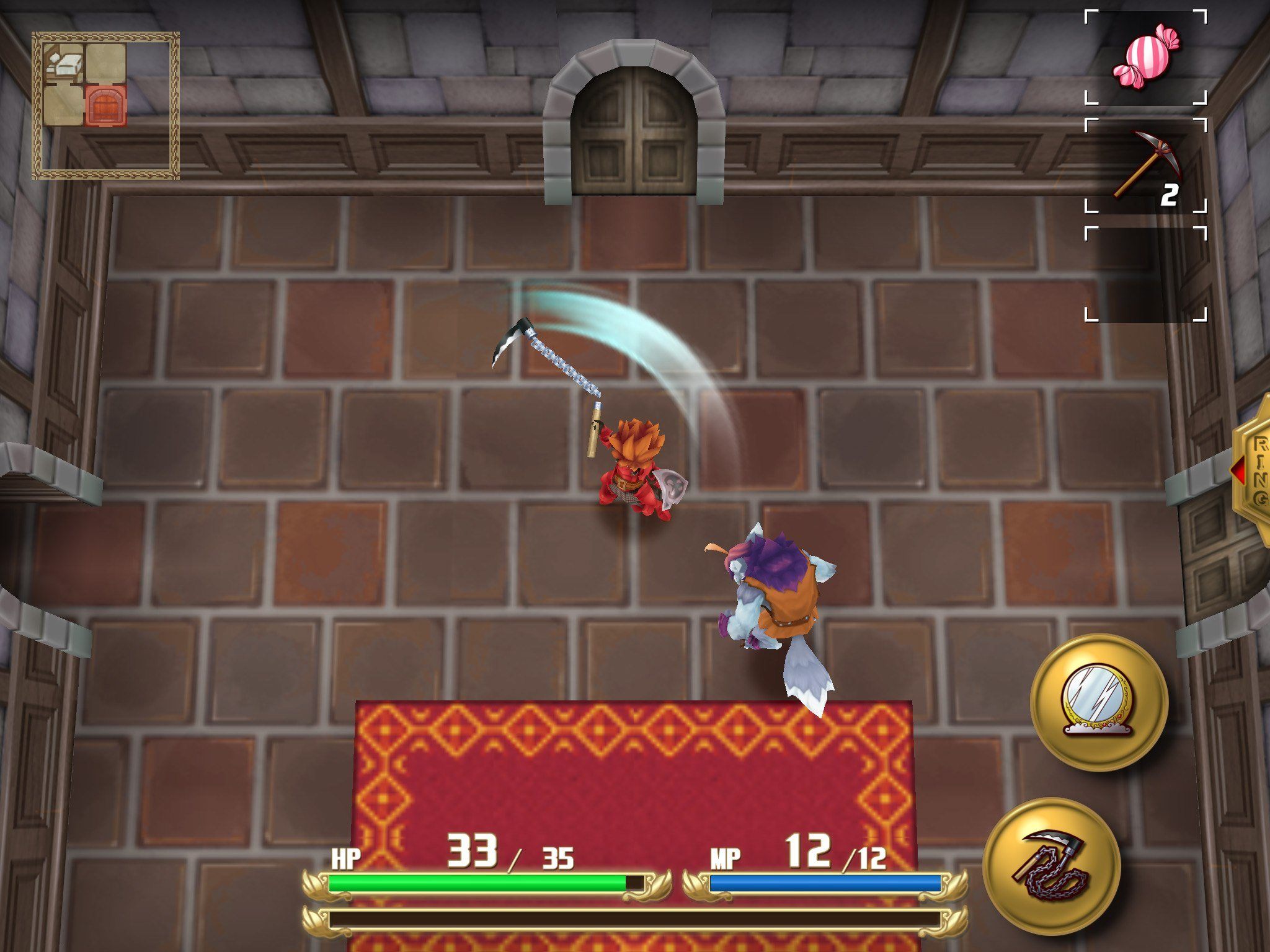 This limit gauge adds depth to fights, as waiting for it to fill completely will allow Sumo to unleash an extra powerful special attack specific to the weapon at hand. Attacking or being hit will reset the bar, so you’ll often have to decide if you want to go in with a flurry of weak swings or hang back and wait for a single powerful burst. Of course, the best strategy is usually a combination of the two, but the gauge, combined with the various types of magic and weapons Sumo can wield, provide plenty of variety in taking down foes.

Those weapons are a recurring feature in the Mana series and are implemented extremely well in its first entry. Sumo can use swords, axes, flails, and more throughout his journey, with each having a unique attack pattern and purpose. Swords provide a mid-range swing or stab while flails lash out long-range in a straight line. Most weapons also feature an environmental purpose as well: axes can chop down trees to open new paths while the morning star can break weakened walls hiding secret passages. Each type of weapon comes in several varieties with bonus strengths, such as a flame version that’s strong against ice monsters or one that absorbs enemies’ HP upon attack. Knowing which weapon to use against which enemy and swapping accordingly is a key part to success in Sumo’s journey. 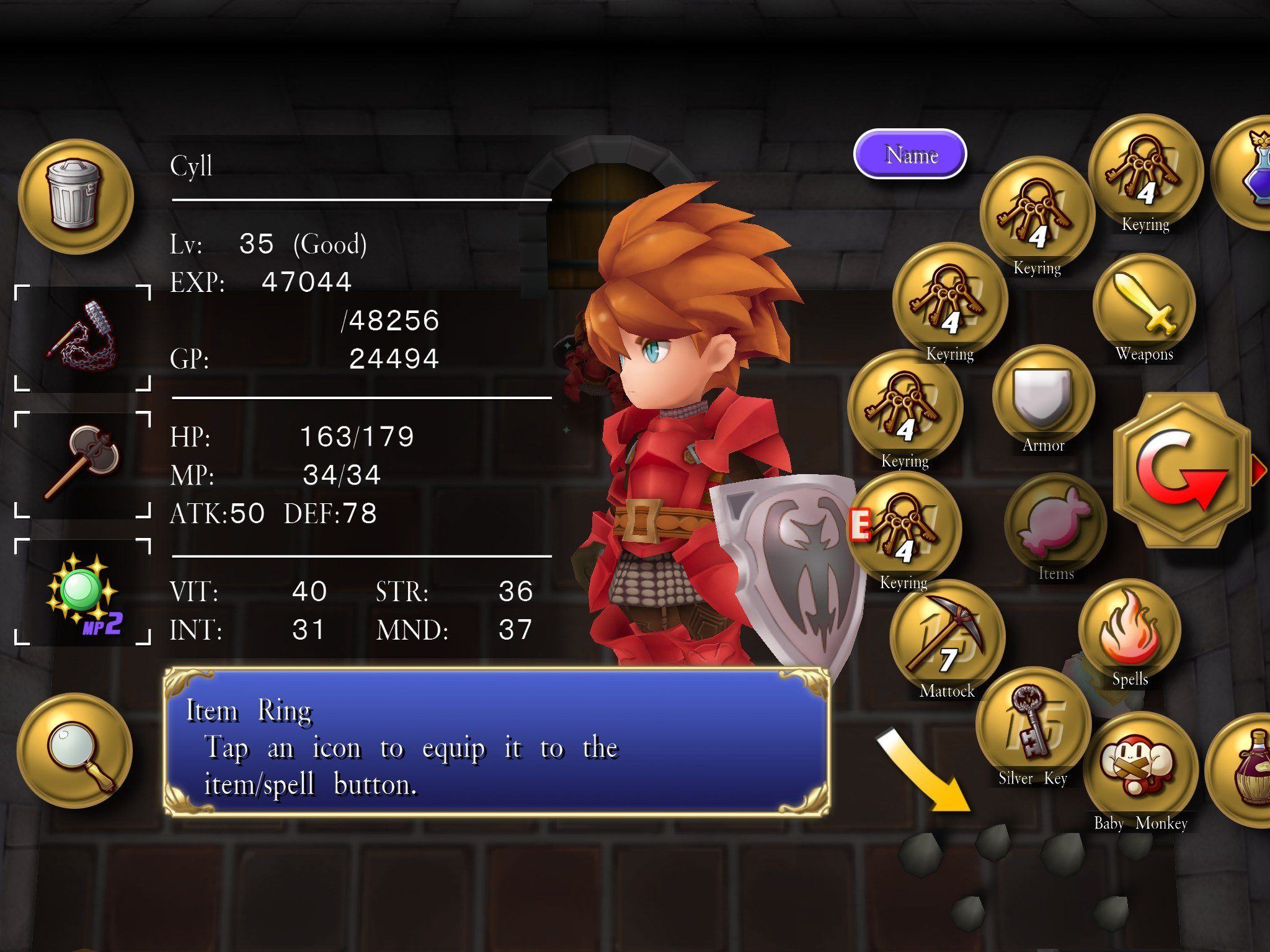 Thankfully, Adventures of Mana has made this swapping process infinitely easier than its Game Boy counterpart. One of the most significant improvements made in this mobile update is the addition of three shortcut buttons. You can assign anything to these buttons—weapons, magic, or items—and swap them out with your present equipment immediately. In an area with a lot of trees, for instance, you may want quick access to the axe even if you’re not using it as your main weapon. Or you may want Cure magic available while simultaneously using Fireball. Now you no longer have to open the menu for every new equipment swap; you just assign it to the shortcut and tap mid-action to access it. This on-screen access is true for companion’s abilities, as well. Instead of entering the menu every time you need a partner’s help—such as Fuji’s healing spell or Watts’ shop—you can instead just tap their dialogue icon near the shortcut menu to receive their assistance. This makes gameplay much smoother and action-oriented instead of bogged down in constant menu management.

Unfortunately, this upgrade doesn’t apply to item management itself. Adventures of Mana carries over Final Fantasy Adventure’s bizarre item system, which places a limit on the number of item slots available and offers no opportunity to combine stacks. This means you might have a stack of six mattocks and a stack of just one taking up two item slots, with no way to combine them into a single stack of seven. Considering the game requires you to carry keys and mattocks around to get through dungeons—you can find some from enemy drops, but they’re random and unreliable—it’s easy to end up with half your inventory filled by multiple stacks of the same item type and little room for anything else. It seems like a simple solution would be to allow combinations but to limit the max number per stack to prevent making the game too easy, but Square didn’t go that route this time. 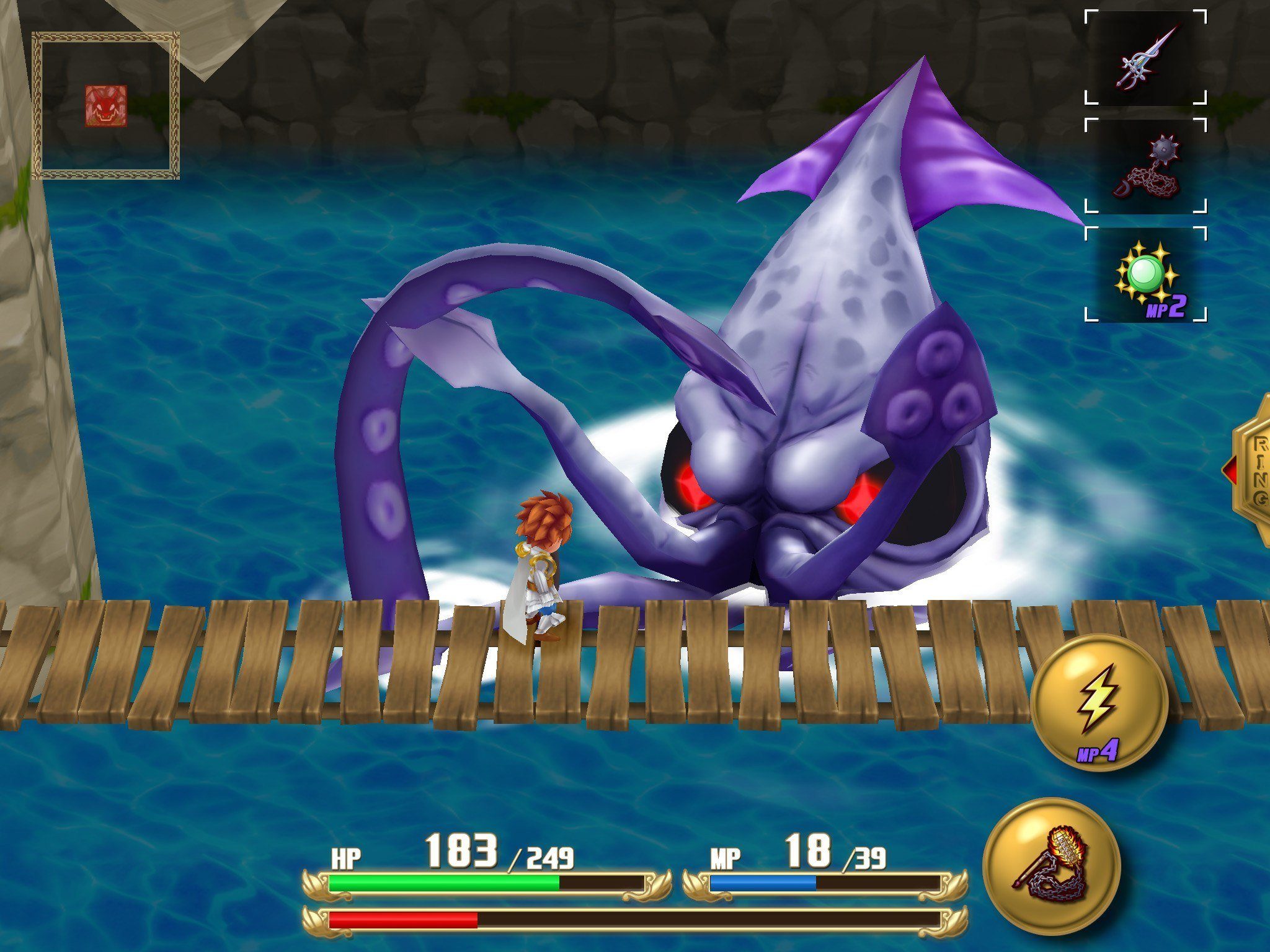 The other area the game suffers is simply leftover from its retro origins. Dungeons are overly simple and fairly repetitive, with most dungeons blending together. The majority of them are a handful of rooms spread out across three or four floors, with breakable walls and locked doors between them and the occasional button that must be pressed or pot that must be smashed. There are a lot of bosses and mini-bosses, however, to break up the repetition, but any sufficiently-leveled player should find these fights fairly straightforward as well. The fact that the game is still engaging and worth playing despite its weak dungeon layouts is a testament to its gameplay and how much fun using the different weapons and magic truly is.

There’s also a nostalgic joy in seeing the beginnings of the Mana series recreated in vibrant color: basically all the enemies that populate Adventures of Mana returned in Secret of Mana, from bouncy rabites to the army helmet-wearing mad mallard to the admittedly creepy disembodied griffin hand; they’re all here. If you’ve ever loved any Mana game and its strange world—or even just thought you might—Adventures of Mana should be a rewarding trip down a freshly painted memory lane.