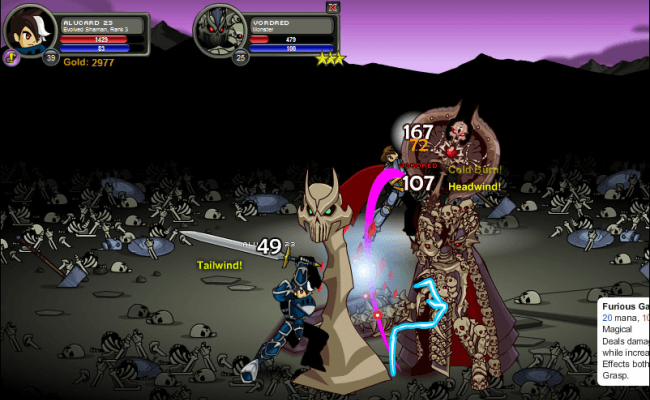 AdventureQuest Worlds is heavy on the cosmetics, but even heavier on the pay walls.

There’s no shame in admitting that we all get sucked into the war between style and substance at times. The ideal is to find a balance, but sometimes games like AdventureQuest Worlds show up that are unabashedly fighting on the front lines. This free-to-try fantasy MMO plays right in your browser and serves up some of the coolest looking gear around, but it’s often buried in layers of confusion and monotony.

To be fair, that doesn’t mean that AQ Worlds doesn’t have a story at its core. There’s currently an intriguing three-way dance going on between good, evil and chaos; one where players can throw in with either of the first two factions to try and vanquish the third. Much of the plot is communicated through cutscenes with more animation than dialogue, making it easy to digest no matter what language you speak. 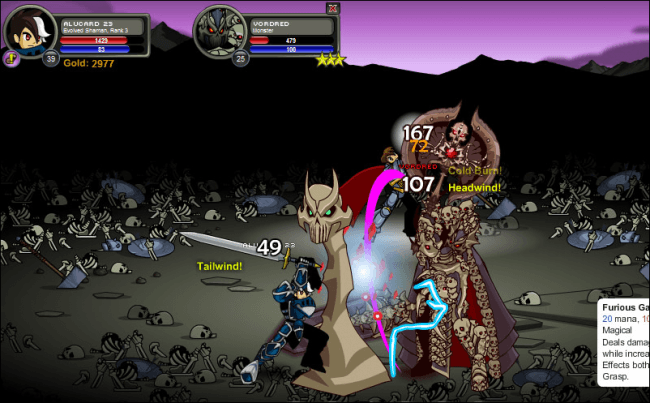 Your place in the not-super-creatively-named world of Lore is harder to figure out. As a free player, you begin the game as one of four basic fantasy RPG classes: warrior, rogue, mage or healer. More interesting choices await on both the good and evil sides as you advance; some of which can be unlocked by completing quests. Most need an investment of real money in some way, though, which is something of a recurring theme.

While it is indeed free to create an account and start playing, a great deal of the content is behind a de facto pay wall of some sort, including zones, weapons, armor, pets and character classes. All of those goodies are available to members who pay a monthly fee. There’s nothing wrong with that, as many games operate on a similar model these days. It’s just that so much stuff is member-only that the free option almost isn’t even an option at all.

AdventureCoins can also get you some of the most desirable gear, and you can earn them in the regular course of play. Special offers and sponsored ads are in the mix as well, almost like Artix took every possible way to monetize the game and tossed them all into the same stew. 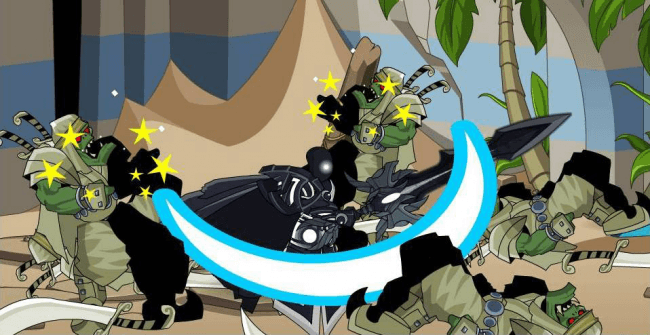 That’d be more forgivable if there were lots of interesting things to do, but that’s not really the case. The quests are almost all of the time-worn “Kill X monsters, collect X items” variety. Most of those monsters just stand around waiting for you too, like their sole purpose in life is indeed for you and the other players to kill them. And that’s assuming you can even find the right monsters, because the quest instructions can be a bit sparse at times. Plus you have to trek all the way back to the quest giver when it’s complete. The world map allows you to teleport directly from one zone to another, but there’s no way you’d know that except from trial and error (or perhaps asking someone in world chat).

Combat is super simple, requiring a double click to initiate a fight and lock in your character’s auto attack. As you gain expertise in your class of choice, you’ll also gain access to special abilities mapped to buttons at the bottom of the screen that have cool down timers and draw on your pool of Mana. Still, fighting gets repetitive pretty quickly. Considering you’ll have to do it often, that’s not a good thing. 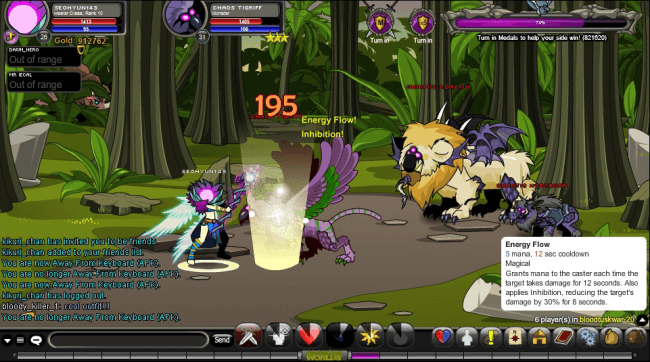 You will, however, look good doing it. Where AdventureQuest Worlds really shines is in the area of cosmetic enhancements, particularly if you opt for a membership. I’m not certain I’ve ever seen a larger collection of ridiculously oversized swords, dual-wielded weapons, and extremely ornate armor sets in any game. If that’s your thing, you’ve got the right game. I’m long past knowing what’s cool to kids, but it seems like younger gamers would particularly enjoy all the choices, which is fitting since the developers aim to make it safe for gamers as young as age 10 – complete with canned chat servers to protect the young ones.

Maybe that’s it then, and I’m just not the target audience for this game. I’d like to think even the 10-year-old me would find AdventureQuest Worlds alluring at first glance, but dull after spending some time with it. There’s certainly no harm in trying it out for free; just keep in mind that the beauty here is mostly skin deep.