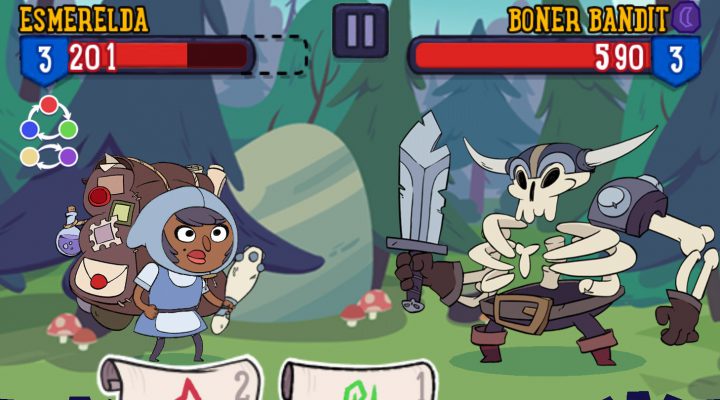 If it ain't broke, don't fix it. It's a match-3 RPG that doesn't rock the boat too much, and is beautiful to boot.

Adult Swim and PikPok have made a match-3 RPG, Adventure Xpress. The genre was once clever and unique, but when so many games have taken the Puzzle Quest formula and iterated and expanded on it for themselves, a new one isn’t necessarily interesting. But Adult Swim Games doesn’t publish boring games, and PikPok doesn’t make them. So while ‘match-3 RPG’ is definitely a genre where it’s hard to innovate, they’ve come out the other end with a solid game.

The game follows the basic core trappings of any match-3 RPG: it’s about defeating enemies by doing damage through matching 3 of the same color gem on the board. Adjacent gems can be swiped with each other, Bejeweled-style. It’s not necessary to make a match, but that does take up a turn, which allows the enemy to attack. There’s a rock-paper-scissors elemental battle going on with the gems on the board: red beats green, green beats blue, blue beats red. Also, light beats dark and vice versa. Enemies weak to an element take double damage, enemies of the same element take half damage. Using a certain color will charge up spells, which have greater effects when at maximum level. It’s possible to upgrade spells, and to buy better equipment.

In other words, all standard match-3 RPG stuff. 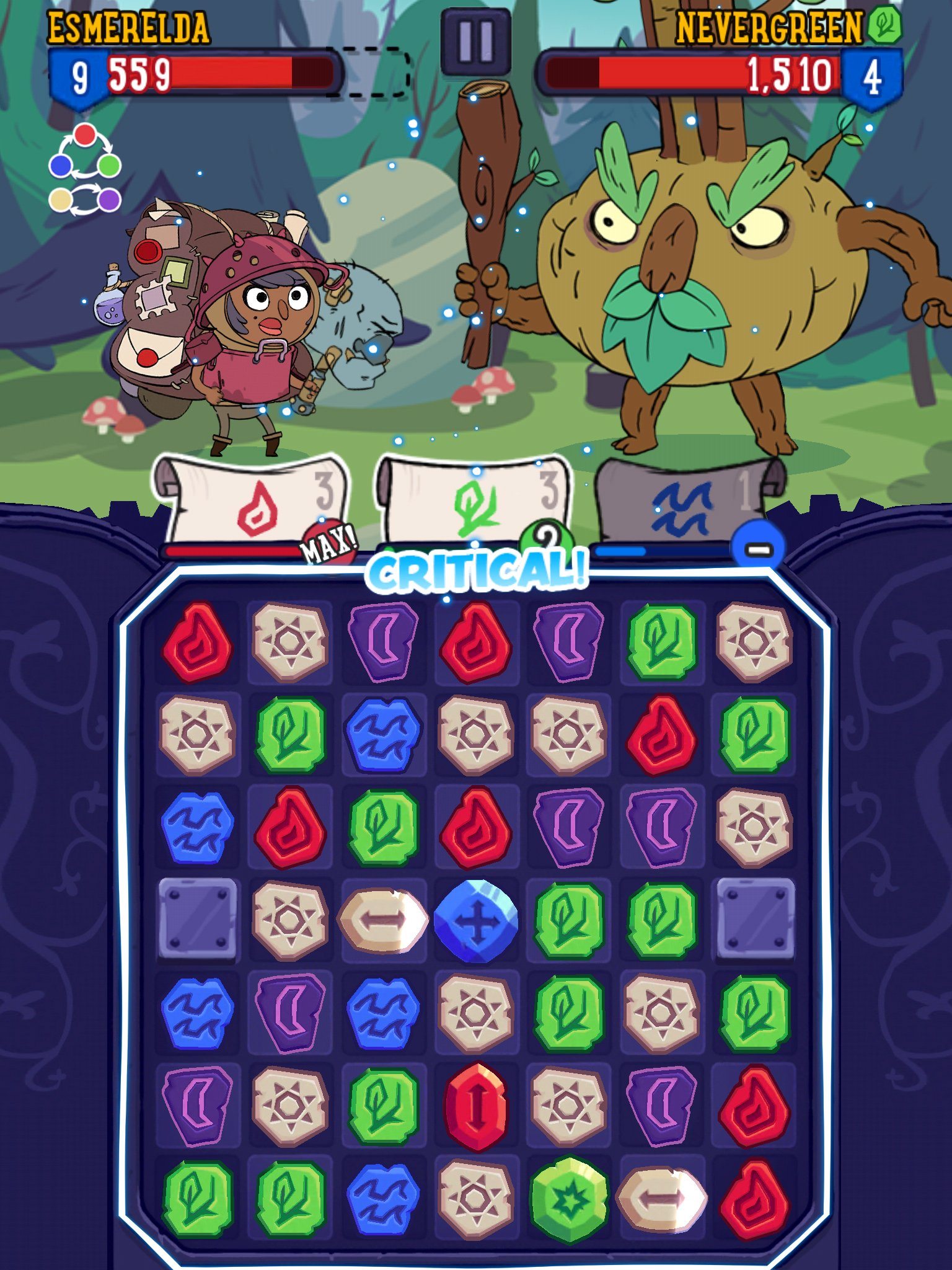 Adventure Xpress’ progression is curious, because it feels like it’s stacked against the player a lot more than would be expected from an Adult Swim and/or PikPok game. But what’s curious about it is that getting coins, the soft currency, is actually pretty easy, and it seems like the value of gold bags don’t actually increase by all that much throughout the game. So, it’s possible to grind early levels to get chunks of gold at a time, with the occasional reward of tickets.

And really, the game makes it pretty difficult to get overpowered. It’s possible to unlock the next tier of upgrades early by using tickets, but it’s not possible to just go out and buy a level 50 weapon and romp through the countryside.

But Adventure Xpress does encourage grinding in order to buy that better equipment, to buy upgrades, and the like. I’m not even sure if it’s a problem or not, because while I find the act of grinding unnecessarily to be annoying, you can always go back and earn money for upgrades through easier battles. Perhaps they net less experience, but it’s not like experience is earned much more quickly through later battles than earlier ones.

Is it a good system, or a bad one? I’m still uncertain.

Thankfully, the game’s energy system is rarely an issue. Lives only diminish upon death, which makes the aforementioned grinding possible. Generally, only the end boss of each world or the side gold missions will cause deaths to be a realistic factor for the player who is smart about grinding to keep items and spells up to spec. 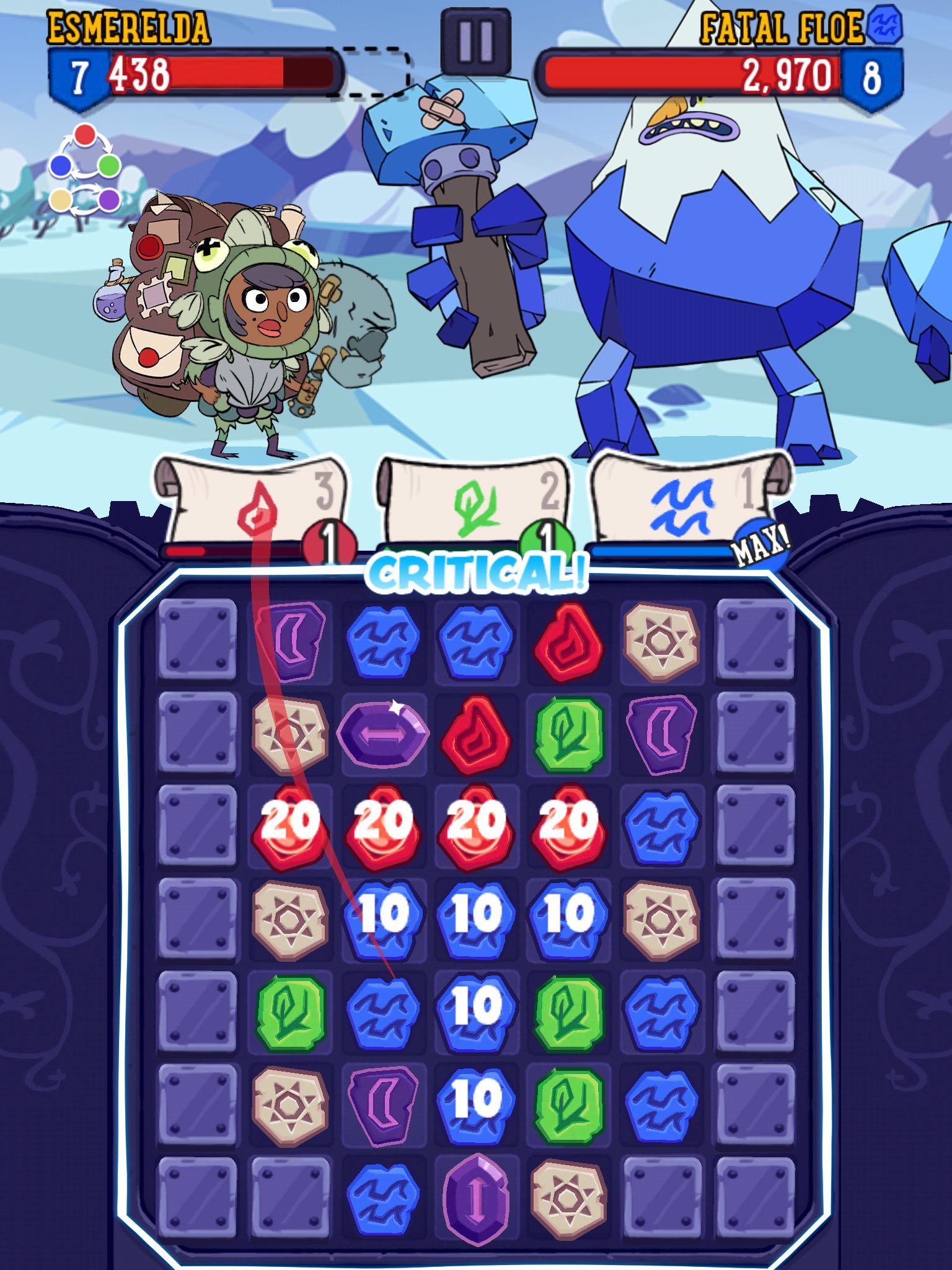 While I can certainly recognize the tropes that Adventure Xpress uses, there’s a lot to like too. The game’s production values are top-notch, with spectacular animation. The game looks gorgeous in motion; even the map is more than just images on top of each other, with a 3D effect going around. The character designs are fantastic, and the different costumes are detailed and humorous, as they all represent armor and weapons assembled out of necessity. The controls work well, too, and while it can be a bit easy to swipe accidentally if you’re not careful, it otherwise feels good to make moves.

Adventure Xpress doesn’t do anything to blow the door open when it comes to the match-3 genre. It doesn’t revolutionize it, and it’s not trying to. Regardless, Adventure Xpress is still plenty entertaining for fans of the genre.