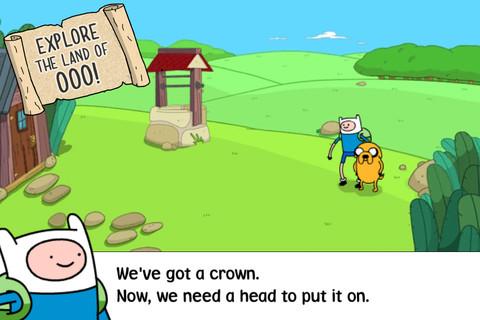 Before the angry fans begin calling for my head, let me start with this: I love Adventure Time. I signed a petition for the show to be picked up by Nickelodeon back in 2008 when the pilot aired on Random! Cartoons. I took a picture next to a giant inflatable Jake at E3, and even got a brief conversation in with Pendleton Ward himself. It’s a silly show, but its random and unorthodox presentation style is downright charming.

All that said, Adventure Time – Legends of Ooo: Big Hollow Princess is one of the most disappointing games I’ve played in a long time. I knew that the upcoming DS title Hey Ice King! Why’d you steal our garbage?! was slated for this fall, but finding an unexpected Adventure Time title toward the top of the App Store charts was a fantastic surprise.

The only thing worse than a bad game is a bad game you expected to be good.

The strangest thing about Big Hollow Princess is how promising it seems from the first 60 seconds. It’s an old-school point-and-click adventure with visuals and voice acting that seems straight out of the original cartoon. Animations are smooth, and the acoustic guitar background is catchy. And then I realized that my first 60 seconds was close to one tenth of my total playing time.

Big Hollow Princess might be the easiest and shortest point-and-click adventure I’ve ever played. I grew up on children’s adventure games (such as Putt-Putt and Pajama Sam), and even those games put up a much larger challenge. The puzzles are about as rudimentary as it can get.

For example, toward the end of the game I found a bear that was hungry. Next screen? I find a honeycomb to feed him. Almost every puzzle in the game is solved by retrieving an item one to two screen away. The fact that the game offers a currency for hints (in this case, snails) is almost insulting.

Your goal is to stop the evil Ice King from freezing three of the land’s most popular princesses. While there are a handful of locations to travel as you move from princess to princess, each area will only take one to two minutes of your time. 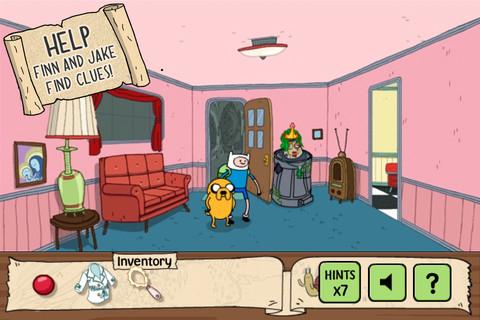 The biggest problem with the adventure’s biggest assets, voice acting, is that it only applies to Finn, Jake, and the Ice King. All other NPCs that you meet (and there are a lot of them) are unvoiced. This led me to a strange disconnect that I’ve never felt before in a videogame. There’s simply nothing quite like listening to have a conversation while being forced to read the second half.

After my fifteen-minute adventure (it honestly might have been shorter than that), I found myself with nothing left to do. I decided to speed run through the game a second time to see just how short the game was at minimum, and clocked in at six and a half minutes. As much as it pained me to do so, I deleted the App as soon as the second run completed: Big Hollow Princess simply had nothing left to offer me.

It might seem like I’m being overly dramatic about such a small game, but there’s one thing in particular that really frustrates me: it isn’t free. Sure, it’s only 99 cents, but the game offers far too little content compared to the App Store’s fantastic library of budget apps to justify its price. It’s basically an advertisement for Adventure Time, anyways. It should be free.

Then, after a little searching, it dawned on me: it is free! The entire Big Hollow Princess game is available via Cartoon Network’s website, sans any voice acting. If you want to lead Finn and Jake through a short adventure for free, I highly recommend you check it out there. You’ll end up a lot less angry that way. 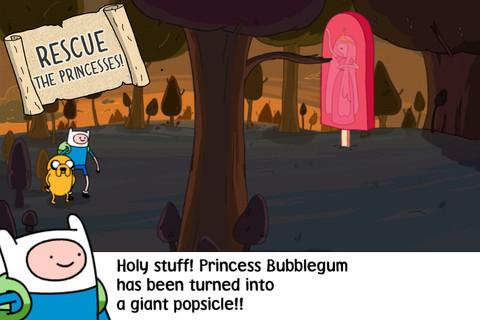 While I’ve definitely seen worse, Big Hollow Princess is still a pretty good example of a corporate cash-in. It’s current place near the top of the App Store charts nearly justifies their practice, too: people will buy anything as long as it has the Adventure Time name on it.

My advice to you? Don’t fall into the scheme. The visuals and audio are nice, but the game is insultingly short and only mildly interactive. Save your dollar for the dozens of other fantastic iOS titles out there, and play through the ten-minute adventure for free online.