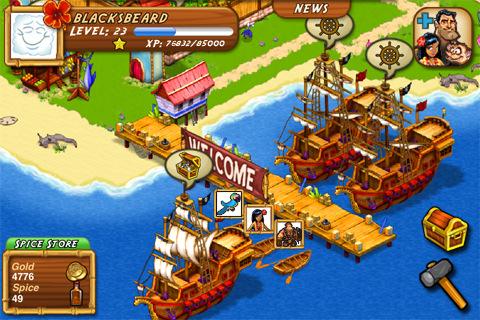 Taking to the high seas seems to be all the rage in iPhone games nowadays. Pirate Nation paved the way a few months back, Lil’ Pirates cemented the concept, and now ngmoco is walking the plank with Adventure Bay, a game that takes everything you loved about the We series and infuses it with a dose of high seas adventure.

At first glance Adventure Bay really does come across as little more than an island-themed twist on ngmoco’s popular We formula. The basics here are largely the same. Players will set up buildings, fill orders from friends, collect coins after a set period of time, and engage in some light farming. If anything, the starter experience might quickly make you wonder why this wasn’t simply called We Island. But these basics that veteran players of ngmoco’s previous games are intimately familiar with only make up half the experience.

The other half focuses on treasure hunting, unlocking new characters, and completing their quest lines. Starting with only a captain, players will tap on their boats to start a quest, get a push notification once they’ve arrived at their destination, and play a turn-based mini-game at that location to try and gather as much booty as they possibly can.

Your character will only have a limited number of moves, and with the playing field shrouded in mystery you won’t know what’s on a particular square until you’re right next to it. This means your results will be based more on luck than strategy, but that doesn’t make discovering treasure any less rewarding.

Sometimes you’ll discover things other than treasure, too. Rocks will block paths and enemies will stand in your way should you head in the wrong direction. Both of these can be defeated, but each battle consumes a number of moves before the offending parties are removed from play. Thankfully different characters have different strengths that address these very situations. One character, for example, can destroy rocks in a single blow, while another can defeat a specific enemy in a single hit. 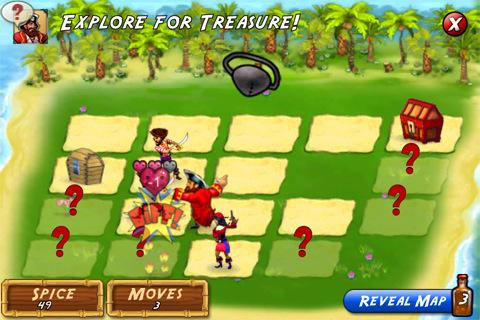 The number of moves each character has may be limited, but that number can grow if your friends decide to offer their help. As is usually the case, ngmoco manages to lead the charge when it comes to the social elements of mobile social gaming. Players can tap on their friends boats to add extra moves to their quest, and in return are rewarded with a mystery chest once the quest is complete. Likewise, players can still place orders and whatnot at the buildings of their friends.

The two halves of Adventure Bay, We inspired elements and high seas piracy, blend together quite nicely. To unlock new characters you’ll need to build certain buildings on the island. To get some great on-island bonuses, you’ll need to complete different collections of loot that you can turn in for rewards. There’s always the potential for a cross-genre mash-up like this to feel awkward and disjointed, but both sides of Adventure Bay manage to flow as smoothly as a pirate’s sails.

While it may be built on the core elements of the We series, Adventure Bay manages to address the one complaint that has plagued the series since day one: there simply wasn’t enough to do. A great mash-up that combines two distinct elements with great success, Adventure Bay is one pirate ship that’s worth boarding.