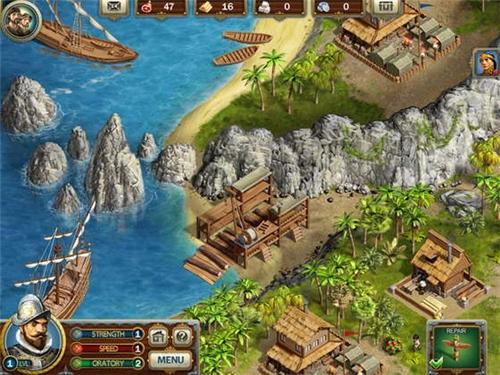 A strong foundation to build on

It’s the Age of Discovery, and Spain is interested in nothing more than traveling to uncharted lands filled with gold. However, when a Spanish expedition goes missing, the goals become more complicated. As the leader of a second expedition, you’ll follow in the footsteps of the missing Spaniards, and must track down any survivors while also gathering any gold you come across for the crown.

Adelantado Trilogy: Book One sees you completing 10 incredibly lengthy time management / casual strategy levels that come with slight variations on the same few goals. You’ll be required to gather a certain amount of gold in the name of Spain, interact with the local native populations and find survivors in each level, with tasks becoming more complicated or at least more time consuming as you go along. Each level sees you balancing the use of a multitude of resources, including food, stone, silver, worker population and wood, with specific building groups being available for the production of each.

For food production, for instance, you can stick with small gardens that produce small amounts of food, or you can build fields and bakeries that produce larger quantities. In terms of wood production, you’ll need to first build a woodcutter for raw lumber and then a sawmill that will convert that lumber into a usable material. Gathering all of the resources you need in a particular level is a complex dance, as a single level can easily last 30 minutes or more. By the end, you could find yourself running incredibly low on one or more resources if you haven’t planned correctly.

Adding to the complexity of the experience is an efficiency system that sees each building become worthless after a set period of time. This adds a small sense of realism to the game, as woodcutters simply run out of trees to chop down, a mine runs out of salvageable rock or a plot of land runs out of minerals required to sufficiently grow crops.

Unfortunately, with the linear setup of each level, multiple buildings tend to fail all at the same time, leaving you scraping by for resources until you can replace these failed structures elsewhere on the map. In the meantime, you’ll need to constantly repair totems or build watchtowers to uncover further sections of the map, and must use your main avatar to interact with the locals, break pots and barrels for excess resources or investigate side-quest areas off of the main map. Putting it simply, there’s a ton to do in each level of Adelantado. While each individual task requires little effort to complete, the entire package can become a tiring experience. 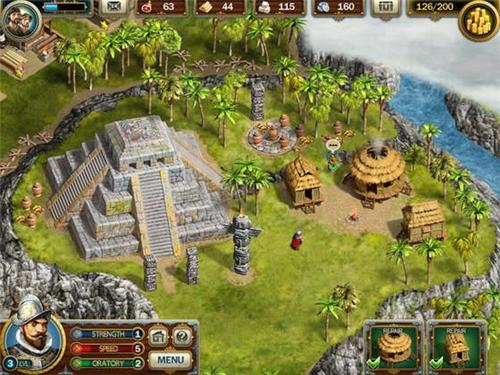 If Adelantado has flaws, they come in the slow speed with which your workers move and produce items, and in the sheer length of each stage. While you can collect magical stones that allow your main character to move faster or otherwise better interact with the environment and its characters, these upgrades are reset after each level and your workers receive none of the benefits along the way. If there was simply a power-up that allowed your workers to move faster for a short amount of time, then each level wouldn’t become so monotonous or even boring by the end.

If you break Adelantado Trilogy: Book of One into multiple play sessions, where you complete only one or perhaps two levels at a time, the repetition of the experience doesn’t have a chance to become a problem. However, this isn’t a game that most players will enjoy completing (or have the time to complete) in one sitting, as there’s a ton of content standing between you and the finale. This is still an experience that would arguably have performed better as many more smaller, shorter levels, but as it stands, the game provides plenty of content and challenge for those looking for a title that truly requires forethought and strategy before every move is made.