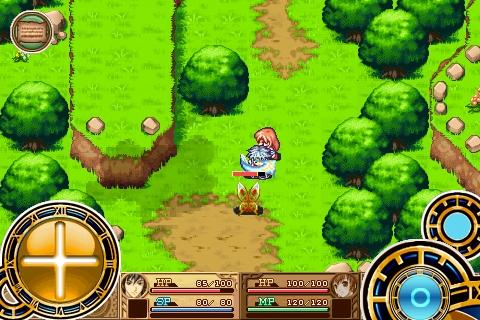 Once upon a time, there was a dastardly villain bent on taking over the world. And then, once upon another time, there was a brave knight and a magical girl who set out to repair all the damage done by this ne’er-do-well, traveling through the past and the present, trying to make things right save world. And so begins the tale of Across Age, a new Action RPG available for the iPhone.

The game’s story isn’t terribly original, but it is well-told: an evil sorcerer named Agrean has begun terrorizing the world, causing anyone in his way (this includes entire cities) to vanish without a trace. The people’s de facto protector, the Grand Mage, also goes missing and a knight named Ales eventually journeys to a small village to check out claims of a new Grand Mage’s arrival.

The reports are actually about Ceska, the previous mage’s daughter. Ceska has some powerful magic at her command, mainly a spell called “Across Age” that allows her to travel through time. However, the rest of her magic still needs a lot of work. Still, traveling through time is pretty impressive, so Ales agrees to take Ceska with him on his journey and the two set out to put a stop to Agrean’s reign of terror.

As opposed to many other RPGs on the iPhone, Across Age boasts some major production values. The graphics look like they’re straight out of a high-gloss Super Nintendo game, with a top-down view and incredibly well-done character portraits that pop up during the dialogue exchanges. Also, since this is a title this title was created by Japanese developer Exe Create, it bears noting that the game had no noticeable grammar or spelling errors.

Fans of the original Legend of Zelda console games will feel right at home with this title, thanks to its overall style, but the game has a some unique elements going for it, too. Attacking with Ales requires you to use the virtual directional pad and run him into enemies, with damage automatically being assigned. The trick is to run into your opponents at a diagonal angle, which minimizes the amount of damage dealt back to you. You’ll either love or hate this, and this system takes a little while to get used to, but it’ll most likely grow on you with a little patience. Meanwhile, Cesca’s attack style is to use long-range spells, and you can switch control of the characters in the middle of combat, though this will take a little practice to master. The way you switch is by clicking on the character icon at the bottom of the screen. 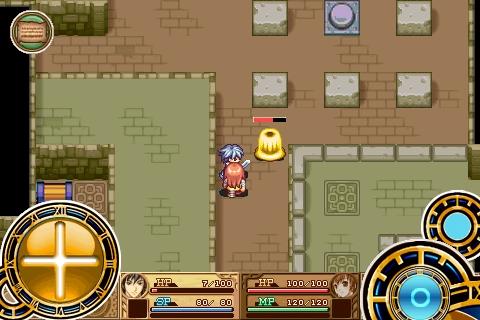 Switching control of characters is a major component of gameplay, one that many of the puzzles you’ll encounter are based around. It’s not uncommon for Ales to fling Ceska across a gap and then have her trigger a bridge he can use to advance. There are times when this system feels a little gimmicky -such as when you’ll have to switch between the two characters when they’re located in different rooms and have each character hit switches to allow the other to progress- but, for the most part, the system works.

Ceska’s time-traveling power is a neat mechanic, too. It’s used to both solve puzzles and craft powerful equipment. By going back in time, you can remove natural obstacles before they grow large enough to be a nuisance. Leaving “rebirth stones” alongside objects in a magic fountain in the past results in more powerful items appearing in the present. Aging certain items is also crucial to certain puzzles, like when Ceska has to leave a cheap bottle of wine in the past so it can become a pricelessly-aged bottle back in modern times.

Overall, Across Age is a competently-made, epic action RPG for the iPhone. It’s not quite perfect, thanks to combat that will either leave players hot or cold, but the game’s production values, inventive puzzles, and creative use of time travel provide enough appeal to make up for any shortcomings.