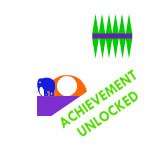 Today’s parents have been accused of coddling their children too much, leading to a false sense of entitlement and self-satisfaction. Achievement Unlocked is a Web game that not only seems to poke fun at this dubious trend, but also at the obsession that certain gamers have with earning “achievements” – those special badges and trophies that are awarded for passing certain in-game milestones. To fend off potential feelings of inadequacy, Achievement Unlocked doles out a ridiculously high number of achievements for performing the most mundane and mindless of “tasks.”

The game itself is elementary. The soundtrack is a cheesy and repetitive polka ditty, and the graphics are blocky and basic, with a few ledges to and pits, some hazardous spikes, and wind tunnels that propel your character upward. The character that you control is, of all things, a small pixely elephant. Nevertheless, the fun in exploring this limited environment lies in seeing just how many achievements you can unlock for doing the most unexpected and random things.

Before you actually get around to clicking on Play to start the game, you will have earned at least three achievements for, among other things, managing to find the title screen. Within seconds of entering Level 1 the game had already awarded me with the Best Player Ever achievement. What did I do to earn this prestigious honor? Earned at least one achievement!

As I sat there, having still not even press one button to move the elephant away from its starting point, I earned a cascade of other achievements for various trivial triumphs like playing the game for 10 seconds and getting to level 1. I picked up a couple more achievements for simply moving left and right for the first time.

The game, by the way, is controlled with the keyboard, and as you might expect, the controls are very simple. There are 99 achievements to collect in total, and you won’t see exactly what you’ve done to unlock them until you stumble onto the correct action, after which the completed achievements shows up in a list. Of course, if you’re curious you can also click through to a Hint page to see instructions that tell you exactly what to do (and yes, you get an achievement for doing this as well).

Once the obvious achievements have been ticked off, there is a nice little sandbox element to Achievement Unlocked that has you trying to see how many crazy, random things you can get the elephant to do in the hopes of earning the last dozen or so of the more obscure and tricky achievements so that you can get 100% completion. With a game that’s bereft of boss battles, treasure to collect, and other typical video game trimmings, it’s interesting to see just how many different ways you can entertain yourself and test the limits of what the environment offers.

Even though its long-term replay value prospects are iffy, Achievement Unlocked is a clever “game with a message” – not to mention its ability to deliver a much-needed ego boost if you’ve just failed out of Rock Band’s Endless Setlist.