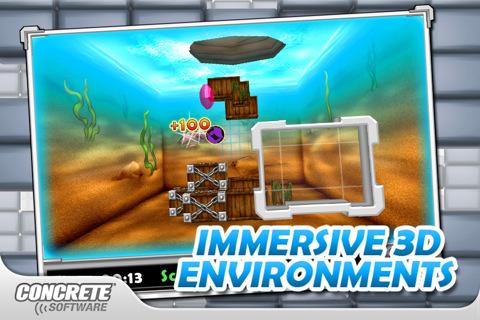 The assignment arrives in my inbox, as my editor tries to get me excited about another Breakout clone to review. Not that they’re bad, but it’s hard to do something really different and fun. With a heavy heart, I load up Aces 3D Brick Breaker. By the end of level two, I’m already excited. And if you’re into block-breaking titles, you should be too. Aces 3D Brick Breaker is that rare creature that claims to be different and actually is!

The story’s the same: with a paddle to rally a ball, destroying all the blocks to progress through a series of (and in Aces 3D Brick Breaker‘s case, over 70) levels. Throw in a few power-ups, different configurations of blocks, and you’ve got a game. But Aces 3D Brick Breaker adds so many little touches that it propels it above most other titles. The 3D view isn’t really new either. Those who bought Microsoft’s Kinect will be somewhat familiar with the idea of moving to a heads-on perspective with boxes behind boxes. But again, Aces 3D Brick Breaker adds more to this.

For the record, the graphics in Aces 3D Brick Breaker are excellent, well-details and sharp. The gameplay is smooth and flowing, without a hint of slowdown, even on older hardware. The different theme areas are a nice touch too. Aces 3D Brick Breaker also features really solid physics which come into play in ways you might not expect.

So how is Aces 3D Brick Breaker different? For starters, the physics engine is necessary not only because of how the balls deflect off the paddle – this has been pretty standard since the beginning – but because of terrain. Levels in Aces 3D Brick Breaker don’t always have a flat surface. Hills and curved spaces change the trajectory of the ball, adding huge challenge to some levels. It’s difficult to get the ball to just be a quick wrecking crew by getting it behind the blocks and just reflecting off the back wall, giving you real satisfaction when you’ve completed them.

Another great gameplay touch is the addition of a depth line. Since 3D is difficult to gauge on a screen (unless you’re using something like a Nintendo 3DS), Aces 3D Brick Breaker adds a ghostly white rectangle that contours the frame of a level showing you how deep your ball is in the level. This one little change makes it much easier to see not only where your ball is, but where the bricks and hazards are, helping you measure your shots much better.

Speaking of your shots, Aces 3D Brick Breaker has designed your paddle to be a transparent drum. As the ball approaches, a shadow appears on your paddle, ensuring you not only not miss the ball, but help you to aim your deflection. While all this can be turned off, it’s a most welcome change.

Aces 3D Brick Breaker features a great variety of bonuses, power-ups and hazards. Naturally, the goal is to complete all the levels with as high a score as possible. To propel said score, you’ll be able to collect various gems throughout the level. But snag them quickly, or else they’ll fade.

Aces 3D Brick Breaker awards stunt-style bonuses, such as points if you hit the ball on the rim of your paddle, netting you a “close call” bonus. Some levels also feature a treasure chest, where you’ll need to collect the key first, then aim right at the lock. Of course, standard gameplay changers like slowing the ball down or lasers are present, too.

Other times, Aces 3D Brick Breaker throws some serious hazards at you, too, like a spiky ball that will shatter your paddle if it hits you. Mix in a great online leaderboard that always tells you how you’re ranking on both that particular level and the world you’re in, and achievements that are actually fun to get, and you’ve got some great incentive to keep playing.

One weird issue with Aces 3D Brick Breaker is the lack of music during levels. The menus and “Get Ready!” music is a high-energy techno affair, but then drops off once things get moving. It’s a little jarring, and in its own way, a big letdown. And like all games built around a simple concept, the gameplay can get a bit repetitive by the end, too.

But for the price, and given the great changes to the genre it makes, Aces 3D Brick Breaker is a very fun arcade block-breaker title. It manages to do some very different things, gives you enough incentive to keep going, and surprises you along the way.