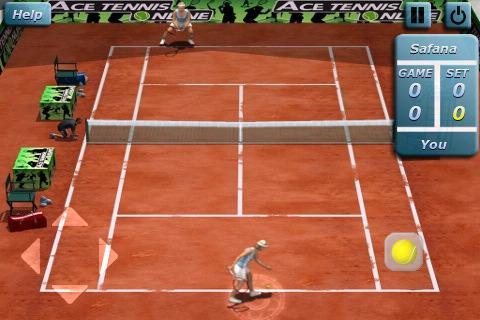 On the professional tennis circuit, having a single killer shot simply isn’t enough any more – you need an all round game to compete with the best. It’s a lesson Ace Tennis 2010 learns the hard way. Despite having a couple of nifty trick shots up its sleeve, it lacks the pace and variety in its game to be able to take on all comers.

Despite playing a rather ponderous game of tennis, Eurocenter’s latest does sport a couple of stand-out features, namely a quirky control system and online play.

The control system involves dragging your player around the court with your finger. When the ball nears your player, he or she will automatically take a swing at it, leaving you to direct the shot by tilting your iPhone left or right. Lobs and drop shots can be executed by tilting the handset back and forward respectively.

It’s certainly a novel way to control the action, but we’re glad there’s a rather more traditional alternative. Selecting this allows you to move around using a virtual d-pad and shot button, although shot direction is still handled a little differently to most. By enabling you to swipe your right thumb in the intended direction of the shot, you’re able to play the ball at different angles to the way you’re running.

We have to say, though, that neither control system ever feels wholly comfortable or clearly preferable to the other. While the traditional system makes for easier movement around the court and more control over how and when you meet the ball, you’ll rarely manage to hit the lines as well as you do with tilt control – particularly on your serve, where it’s possible to ace your way through many of the offline service games. We found ourselves adopting an uneasy mixture of the two.

If Ace Tennis 2010 Online offers almost too many options when it comes to controlling the action, you’ll find that such choice is not forthcoming in the rest of the game. From the four selectable players (two male, two female) to the three tournaments – Indoor (Easy), Sand (Normal) and Grass (Hard) – there’s really not that much to do for the solo player. This point is driven home like an Andy Roddick serve by some fairly inadequate AI opposition, who consistently fail to read or react to well hit lob shots or decent serves out wide.

All of which could possibly be explained and excused by the online focus of the game. Enter the Wi-Fi multiplayer mode and you’ll encounter a powerful match-making system. If there are no games available, it will allow you to start playing against an AI player and will notify you when a human challenger becomes available.

The online tennis experience itself is something of a mixed bag. While it’s undoubtedly a thrill to be able to play against real opposition freely and easily (we managed to complete a number of matches with only a handful of drop-outs) the experience was often laggy. Often we appeared to have won a rally, only for our opponent to suddenly teleport into position and the ball magically appear on your side of the net. We also experienced the odd glitch, such as our name occasionally being swapped with our opponent’s.

As well as that, online play shows up deficiencies in the way the game portrays tennis. The lack of power on ground strokes means it’s very hard to hit a clean winner from the back of the court, even when your opponent is way out of position. Indeed, the best way to play appears to be to rush the net at every opportunity, with the lob way too slow to prove too much of a threat.

While online is certainly fun, then, it’s neither solid nor slick enough to carry an entire game, which is clearly what Eurocenter is aiming for with Ace Tennis 2010 Online. In order to compete with the best tennis games on the App Store, the developer needs to expand and improve the single player experience significantly, and allow for a pacier and more varied game of tennis while nailing down those eccentric controls. Until then, Ace Tennis 2010 Online is something of a mercurial player on the tour, pulling off the odd upset but generally failing to break into the elite.