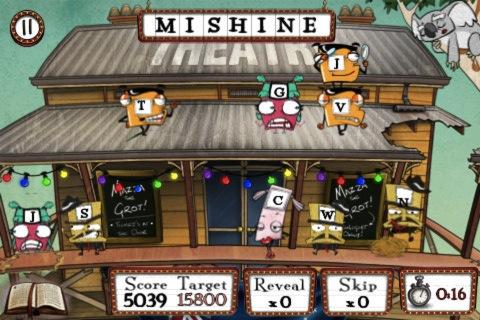 AbraWORDabrA succeeds in creating something unique, but it’s not particularly good

Word games are a dime a dozen on mobile devices nowadays, so it takes something truly unique to stand out. AbraWORDabrA manages to fit that description nicely, but its unique approach to word games fails to satisfy in even the most basic of ways.

Combining word-based gameplay with some… well, I suppose the only word to describe it is “walking,” AbraWORDabrA tells the story of a town full of people who were turned into shapes with letters on display as punishment for laughing at a crummy magic show. It’s broken up into four modes, but none of these really manage to rise above mediocre.

In the first mode, “Mizz Spell,” the object of the game is to correct a misspelled word by collecting and then using a series of letters that walk across the screen. To do this, you’ll need to swipe to create holes for them to fall in, and then swipe to add them to a book. Once in the book, you can drag them into the appropriate position for the word above. There are only so many spaces in the book, so sometimes you’ll have to erase one letter to squeeze in another.

It’s simple, but it’s just not any fun.

And even when you’ve spelled the words, that’s not always good enough. More often than not, you can quickly meet your spelling objective, but find yourself stuck playing the level until you reach a target score. I never thought I’d play a word game where I was forced to grind for points without spelling anything, but if you fix a word too quickly in Mizz Spell, that’s exactly what AbraWORDabrA demands.

In between each spelling level, you’ll be presented with a “Float On” mini-game (which is also available as a separate mode). In these, you’ll need to tilt your device left and right to guide balloons up to a book that’s floating above. Plenty of obstacles get in the way as the game progresses, but this has nothing to do with words, and feels wildly out of place in this game. And like the spelling portion, Float On just isn’t very much fun.

The Ultimate Genius mode brings more of a traditional word game to the table, but it too is hampered with problems. The object of the game here is to spell and submit your own words for points using the letters you’ve collected – but it’s not uncommon to watch a string of consonants walk by, eating up your timer as you wait for that next rare vowel to enter the fray. In fact, I decided to keep track of the letters that popped up in one of my earlier rounds. Here’s what I was given: X, B, B, D, Y, R, W, C, S, C, Z, I, T, P, I, X, P. In a single round lasting one minute and 40 seconds, I received two vowels. Three if you count Y.

And while the letters move a little faster in Ultimate Genius, the “walk’n’swipe” gameplay remains the same as in Mizz Spell, and it’s not any more engaging here than it was before. Combine that with the serious shortage of vowels, and I managed to have even less fun with AbraWORDabrA when it finally was being a word game than when it wasn’t. 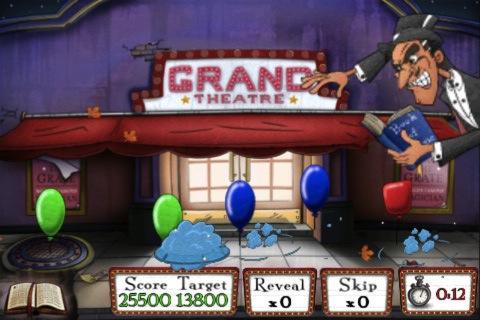 The final mode, “Fill the Gap,” is practically indistinguishable from Mizz Spell. The only difference is that instead of replacing an incorrect letter, you’ll be filling in a missing one.

Compounding AbraWORDabrA‘s gameplay shortcomings is a surprisingly sub-par presentation. You can tell that a lot of care went into crafting the game’s hand-drawn characters and backgrounds, but a lack of Retina Display support makes AbraWORDabrA look blurry on Apple’s latest hardware in just about every respect.

Attempting to blend wordplay with other genres is a risky effort, and in AbraWORDabrA it just doesn’t pay off. If you’re a fan of mobile wordplay, don’t be drawn in by the cute characters and promise of something fresh and original. There are plenty of better options out there.