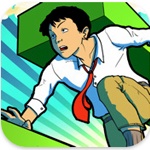 Have you ever found yourself in a rush? The character in Above sure has. Shirt untucked, briefcase trailing behind him, he looks as though he couldn’t be in more of a hurry to get where he’s going. It’s a shame he’ll never get there though, because Above is a game about going up… forever.

Above plays like Doodle Jump would if the iPhone didn’t have tilt functionality. Your character jumps from platform to platform in an attempt to climb higher and higher, but since the game relies on the touch screen instead of the tilt functions, the experience varies greatly from other games in the genre.

In Above, the on-screen character runs from one side of the screen to the other on a non-stop loop. Players will touch the screen when they want him to jump, tapping for a quick jump and holding a finger down to make him jump higher. Like any number of other games on the iPhone market, the goal here is to simply get as high as you can before falling.

You’re given a little leeway about the fall -you’ll be able to drop 2 or 3 platforms before the game comes crashing to an end. And it’s a good thing too, because you’re probably going to fall a lot. Despite the game’s addictiveness, there are certain moments that seem impossibly hard to navigate.

But you can really get in the groove of things until you reach a difficult section, and even then it’s not impossible to progress. The levels are procedurally generated to maximize replay value, which is excellent – but I can’t help but wonder if it’s that randomization that creates the pockets of surprisingly difficult platforming.

It’s a shame too, because the touch gameplay is generally tight and the rest of the package is simply outstanding. Above may have some of best looking visuals we’ve seen in an iPhone game to date. We’re mostly talking about background art here, but the environments are downright stunning. Whether we’re climbing high above a metropolis with animated trains running in the scenery or exploring above a satellite orbiting the earth, the visuals never failed to impress. We can’t tell for sure if the art is hand-drawn, but it doesn’t even matter – the graphics team behind Above can consider their work a tremendous success.

The game offers up three different difficulty levels (not including the weird, occasionally infuriating moments mentioned above), achievements, and the promise of a secret surprise for those who can unlock every badge the game has to offer. Games like this are normally steeped in replayability, and Above is no exception.

It may be similar to a number of other games on the market, but Above offers a unique spin on the “climb until you can’t” survival genre that’s proved so popular on the iPhone. Combining a winning art style with touch gameplay takes this experience into a place we’ve never been before – we just could have done without the pockets of frustration.