By David Laprad | 16 years ago 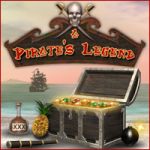 I’ve been sitting here for 20 minutes trying to think of a clever way to open this review of A Pirate’s Legend. I’ve already scrapped, "Ahoy mates! We’ve dug up a new matching game," and, "Shiver me timbers! Will it walk the plank?" Now I’m stumped, so how about you read the review and I keep the cheesy wordplay to a minimum?

Have you ever wondered how developers keep coming up with new ideas for match-three games? After dozens of variations, what form of gameplay could be left untapped? Abduction Studios has come up with something original for A Pirate’s Legend: drawing a line to connect three or more matching objects.

It works like this: you’re presented with a standard match-three game board. On the grid are various pirate-themed objects, such as swords, parrots, gold coins and so on. Using your mouse pointer, you draw a line from one item to the next, connecting as many identical pieces as possible. When those objects disappear, new ones turn up in their place.

In Story Mode, some of the items are placed over gold coins. To beat the level before the powder keg explodes, you’ve got to collect all of the coins by including the objects placed above them in matches. Eventually, silver coins that must be gathered in order to reveal a gold coin start showing up. You can choose to play Story Mode without the time constraints, although this eliminates the challenge of beating the clock.

Two items are on hand to help you win, including a telescope that rearranges all of the game pieces, potentially giving you more matches, and bombs that can change a single item of your choice. The latter does a good job of giving you something you might need, although both are welcome aids.

Since that alone would make for pretty thin gameplay, Abduction padded A Pirate’s Legend with a few extras. For example, when you make matches of four or more items, you raise the Jolly Roger a few feet. Keep making matches without letting too much time pass, and you’ll be rewarded with a bonus round once the skull and crossbones are soaring high. The object in these rounds is to grab as much gold as possible in ten seconds. Clearing the screen results in a mega-point bonus.

In addition, there are four bonus games that appear between levels from time to time, giving you a chance to earn more loot. These include a traditional Memory game in which you turn over cards to find all of the matching pairs, a slot machine style game, a booby trap challenge involving treasure chests, and a variant of the normal game mode in which you connect as many pieces as possible.

Once you’ve completed the first 25 of 100 levels in Story Mode, Scavenger Hunt Mode becomes available. In it, you’re given a specific number of certain objects to collect before time runs out. It’s easier than Story Mode, and there are half as many levels to complete.

Since pirates love booty, Abduction doles out Treasures and Achievements as you work through the game. For example, after ten levels, you’re awarded the Medallion of Divinity. The Treasures provide a nice way of tracking your progress, while the Achievements measure the refinement of your skills. As of level 40 in Story Mode, I’ve earned four of ten Achievements, including Treasure Hunter for ransacking one million dollars and Master Strategist for making a match of at least 50 pieces.

So if A Pirate’s Legend offers plenty of content and better-then-average visuals, why am I not more enthusiastic? The gameplay is enjoyable in small doses, but the levels are almost indistinguishable from each other, giving the action a repetitive feel. Plus, the mouse pointer feels sluggish during the bonus rounds, making it hard to grab all of the coins; it should be easier to back up the cursor a few coins if you make a mistake. And, in the end, A Pirate’s Legend is more of a race against the clock than a strategy offering, so there’s not as much depth as one would like.

Try the demo, though, and see if it raises your Jolly Roger enough for you to shell out for the full version.