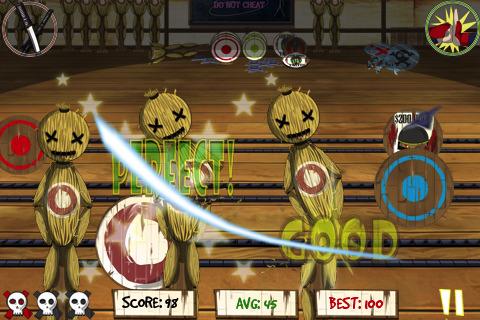 Everything seems great in concept: you attend a ninja school to learn three weapon types (ninja stars, sword and “magic words” which are kind of a color-based mystical attack) along with some night-vision work. Pass all the classes and exams and you can graduate to the next weapon and level, as well as unlocking extra survival modes and achievements along the way. Classes consist of attacking both stationary and moving targets of various sizes and at varying distances. The more precise your strikes, the better your grade. Once you gain control over a weapon type, you can use it by selecting it in the corners of the screen. The attacks are performed by swiping motions across the screen.

Graphically, Ninja Dude: Ninja School is bright, colorful and full of personality. The sounds, from the various ninja grunts and celebratory yelps add to the light-hearted atmosphere of the Ninja School. If the audio isn’t to your taste, you can just play your own from your iPod library.

So with so much seemingly going for it, it’s amazing how two fatal flaws can totally ruin a potentially great game.

The scoring system is punishing to the point of ludicrousness. Points are awarded based on accuracy of hits, percentage of hits versus misses, and targets that disappear before you can hit them. In order to pass a class you must earn an average of at least 50 points. However, even if you hit everything with a “good” to “awesome” rating and not let anything skip past you – no mean feat in of itself – you’ll still end up with a score in the 40s. You have to be near flawless to get a score that’s remotely respectable.

The other problem is a doozy: poor controls. The ninja stars in particular are terrible, with no rhyme or reason to how they release – and they’re the first weapon you encounter. While changing the direction of your swipe will change the angle of the throw, there’s no easy way to consistently get a great throw. And without a tutorial to even guide you (a barebones image of a finger swiping across the screen while the game loads is as much help as you’re going to get), even the best ninja will probably give up before progressing past the first class. I’m able to rack up pretty solid scores in Fruit Ninja, so I am by no means a ninja novice. This was just absurd.

Finally, some swipes simply didn’t do anything. The white swoosh line appeared after my finger made its move, but no weapon was thrown, sliced or lobbed. Every ten or so swipes resulted in a non-attack.

The art of ninjitsu is all about stealth and being invisible. This is good advice for Ninja Dude: Ninja School. Let it stay in the shadows of the App Store, and enjoy ninja action elsewhere.

Tornado: The Secret of the Magic Cave Review