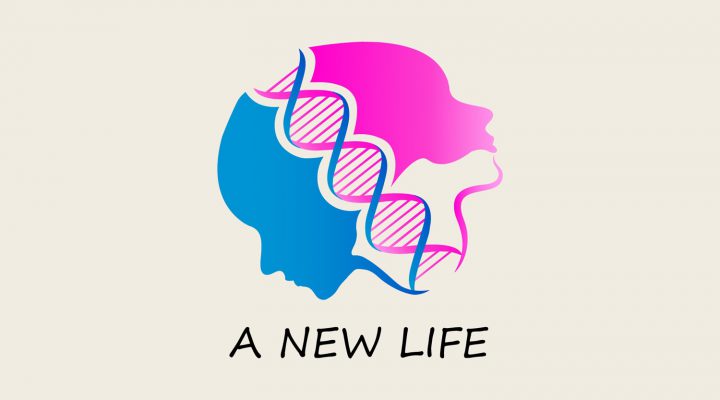 Sleek, straightforward presentation is easy to read and play one-handed.

Works best as a create-your-own story kit that inspires contemplation about what each choice means.

Choices have predetermined values, meaning individual characters' stats and selections are all but pointless.

Choices and events lead only to stat adjustment, with absolutely no exposition.

A lot more abstract, nonsensical choices, like beard vs. baby, than concrete goals, like marriage vs. breakup.

A New Life touts itself as “a role playing real-life simulation of an entire human life.” This is, at the most barebones level, technically true: players begin the game as a newborn and will play out every year of that person’s life until their eventual death. Progress continues as long as you have at least one point of health and is defined solely by the choices you make along the way.

Those choices are the lone gameplay in this uncluttered experience. Two options appear on-screen, denoted by an icon and a title. You simply tap one to select it, then receive a stats screen displaying the results of that choice. These results are entirely numeric, with no exposition or related events. For instance, as a child you may be given the choice between “imaginary friend” or “pet dog.” Choose “imaginary friend” and you’ll receive plus one to intelligence, plus two to charisma, and 20 experience points. The year counter will increase by one and you’ll receive the next pair of choices. 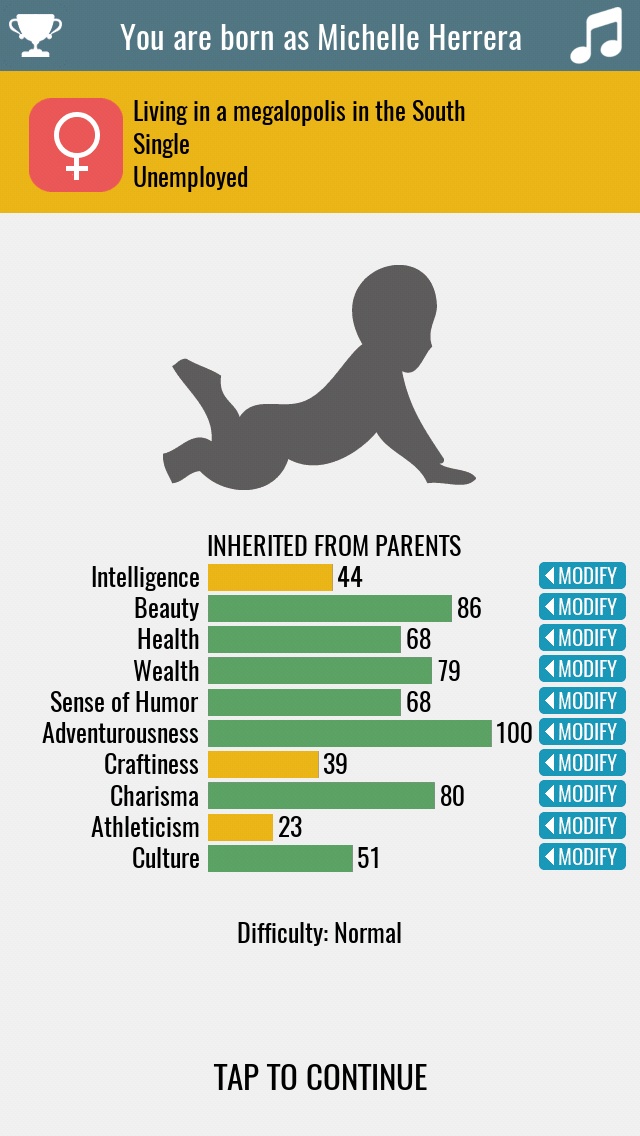 The stats you increase (or decrease) with each choice are randomly assigned at “birth,” along with your name, gender, and hometown. Some characters will be born better off than others, with high values in wealth and health, while others may have to rely on their sense of humor or charisma. The other three factors—happiness, experience, and legacy—all start off at zero, gradually building with each passing year. These latter three are what determine your final “score” upon death and how much karma you’ll earn for each life you lead.

Mechanically, that’s basically it. You choose option one or option two, earn or lose points, and repeat ad infinitum. There are tons of options available: after over 300 cumulative years of playing, I’m still seeing new ones each life. But you’ll also encounter the same choices again and again: for some reason, “banana” has appeared in every life I’ve played, as has “jewelry making.” 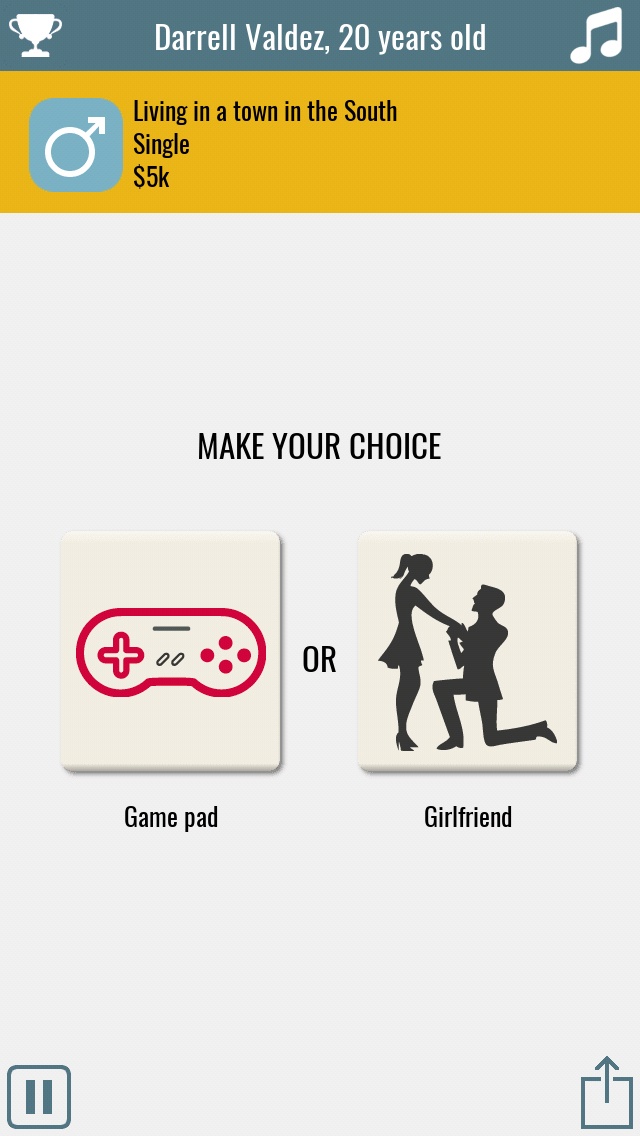 If you’re wondering what choices like that actually mean: it’s really up to you. Does choosing banana mean I like fruit? Monkeys? Innuendo? Will I slip on the peel and break my back? Do I find love at the farmer’s market while banana-shopping? A New Life won’t answer these for you; it merely informs that choosing banana provides plus one health, 10 happiness, and five experience.

This minimalism and simplicity may be refreshing or disappointing, depending on your perspective. Since the game does not provide specific explanations or detailed events, it’s up to the player to create their own backstory and motivations. Without consciously intending, one life ended up telling the story of a self-absorbed doctor who is more focused on external experiences than his family. I chose “sky diving” over “family photo” and “cuckoo clock” over “play with grandchild.” Selecting “country music” instead of “Christmas tree” seemed like picking the isolation of headphones over holiday bonding. Given the chance, I ran for mayor just to get out of the house more. I felt melancholy and hermetic as the years passed, despite my in-game actions amounting to no more than picking “bird watching” over “photo album.” My doctor-elect died in his 70s, long after his children had left home for good. 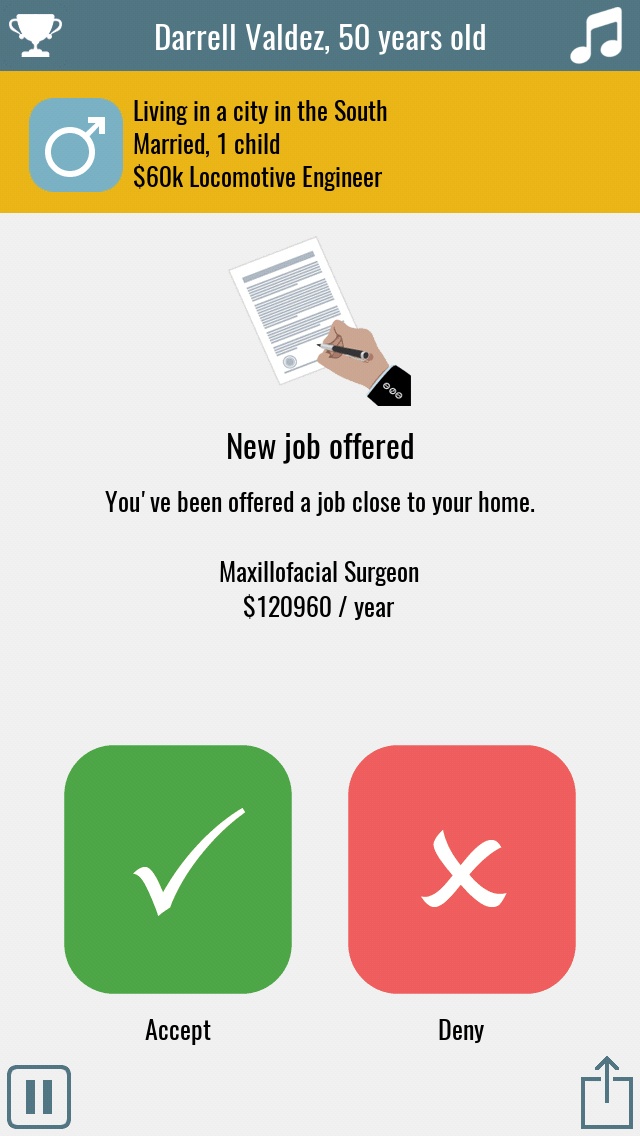 But for players looking for a more fleshed out, directed, gamebook-like experience, A New Life will not satisfy. While random events will punctuate your yearly choosing, these are merely barebones means to the stat-changing end. You may suffer a breakup or be pickpocketed or lose your job; all drains on happiness and wealth with little other consequences.

Some events do impact you in the long run: illness or being destitute will drain your health at a steady clip, while being gainfully employed earns you points of wealth every year. But one of the biggest problems is that there is little correlation between stats, choices, and results. One character got in a fight and came out unscathed, with the event description “Those weightlifting days really paid off.” This led me to believe choosing “dumbbell” as a teenager had carried into my adult life. A few years later, however, he got in another fight and lost, with the game’s default commentary indicating that I should work out more. 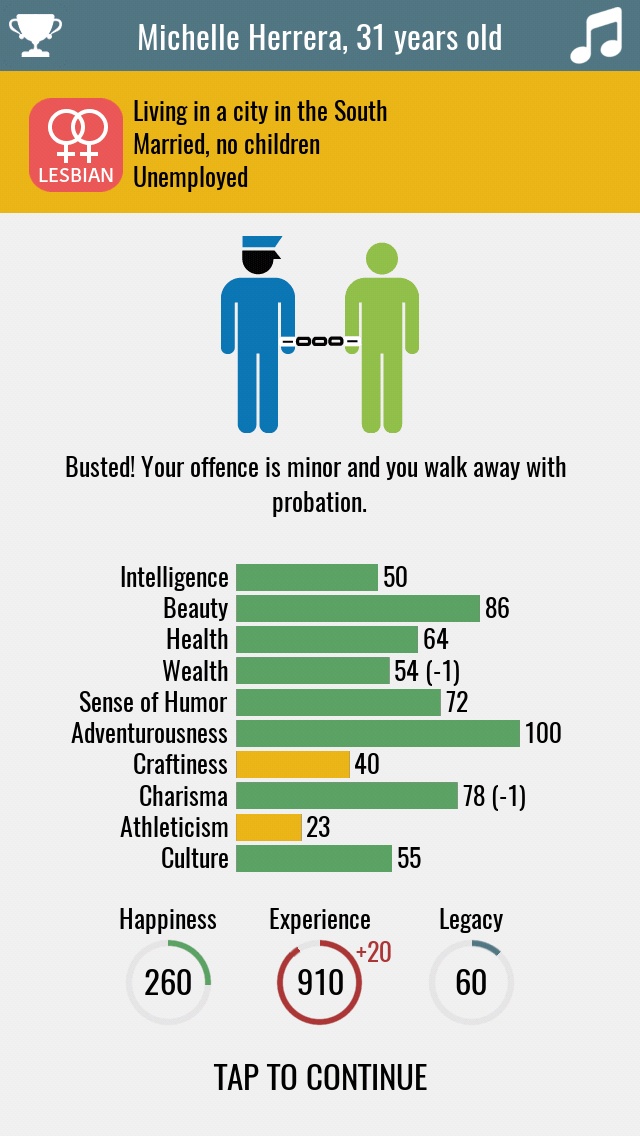 Thus, the life events seem unrelated to your progress and individual character. In an RPG or gamebook, having 70 charisma as opposed to 20 would allow you to succeed at certain challenges, such as talking your way out of a sticky situation or charming a potential date. But even my highest charisma characters suffered breakups. All of my lives, no matter how wealthy or poor, smart or dumb, adventurous or cautious, ended up pickpocketed. My previously mentioned Dr. Loner changed jobs in mid-life: randomly promoted from a locomotive engineer to a maxillofacial surgeon.

From the game’s short tutorial, the Happiness score is your “overall feeling of Happiness when you get what you desire.” Yet the random associations mentioned above and lack of correlation to your current character make the choices feel more like pulling the arm on a slot machine than pursuing actual wants or goals. After losing one point of athleticism every time I chose “internet,” no matter the character’s history and “personality,” I wondered if results actually changed based on character. They don’t. 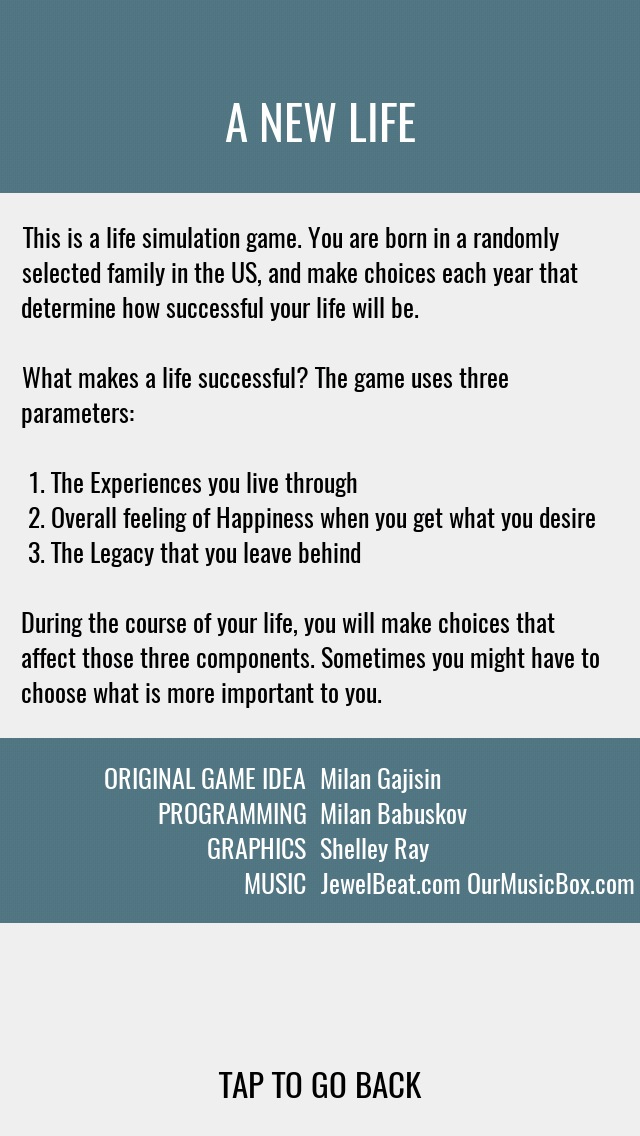 To confirm this suspicion, I made a spreadsheet of every choice and result earned for two separate lives: one a wealthy man living in the Great Lakes area with no sense of humor and the other a cultured woman living on the East Coast in the middle of nowhere. They led very different lives thanks to the hundreds of choices available throughout the game, but shared some common experiences. They each chose “trike” over “balance bike” as toddlers: plus 10 happiness, plus 20 experience. They both chose “puppet theater” over “cinema”: plus two sense of humor, plus 40 experience. They both wanted an “MP3 player” more than a “math equation”: 10 happiness and five experience. They both turned down a marriage proposal twice in their lives: all four times resulted in plus two charisma, minus 30 happiness, plus 40 experience, minus 10 legacy.

You can see where this is going. On the surface, A New Life appears to offer the opportunity to experience the ups and downs of human existence throughout as many lives as you’d like. You manage both the mundane choices of everyday drudgery—“Chinese food” or “barbeque”?—as well as the larger choices that define our destinations—have a child or don’t? The variety and combination of choices can result in some creative backstory filling-in—I’m still pondering what it means to choose “vacuum cleaner” over “solar system,” or “clouds” over “screwdriver”—or more obvious choices you may not get to make in real life—visit the “Acropolis” or “Yellowstone”? 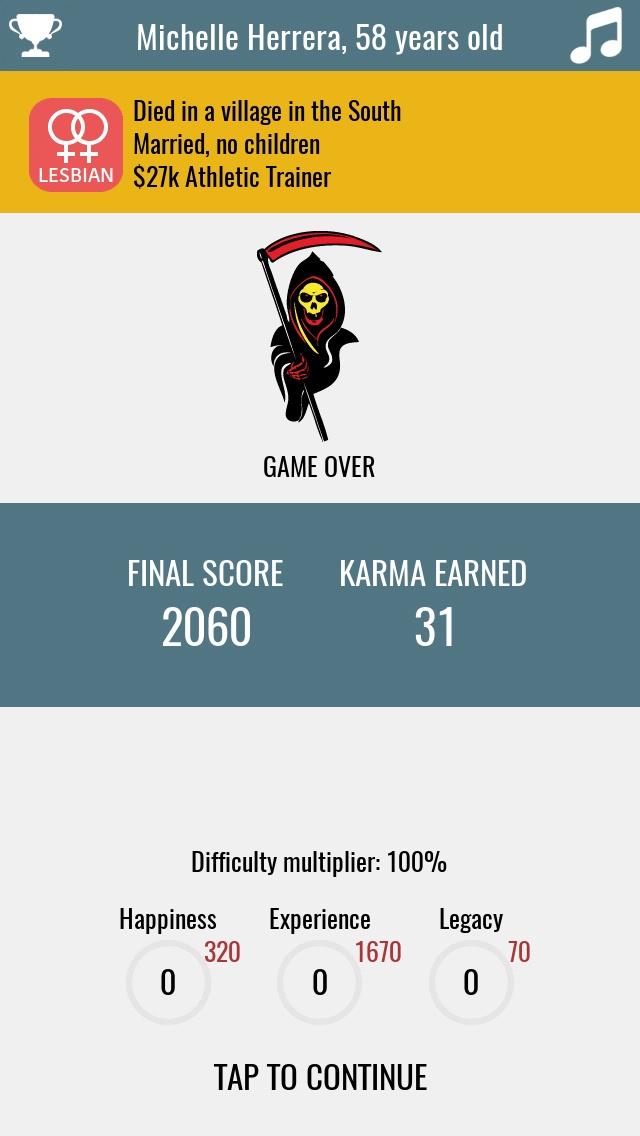 But in actuality, the game is little more than an algorithm with predetermined values for your choices, despite the character or personality that is making them. Choosing “banana” will always give you plus 10 happiness, even if the character you’ve created in your mind hates bananas. Selecting “alarm clock” over “bar fight” made my studious, college-bound character lose points of happiness. Even the wealthiest, healthiest characters may suddenly die from complex influenza.

Is this a commentary on the random, uncontrollable nature of life? The unknowable corners of the human psyche? Perhaps. But it’s still a game, with high scores, a game over screen, and “cheats” that allow you to boost your starting stats for a leg up. Since happiness is actually derived from picking the “right” choice and not the right choice for your character, A New Life is ultimately a breakable numbers engine. Trying to be both this and an abstract exercise in existence results in neither being very satisfying, or long-lived.