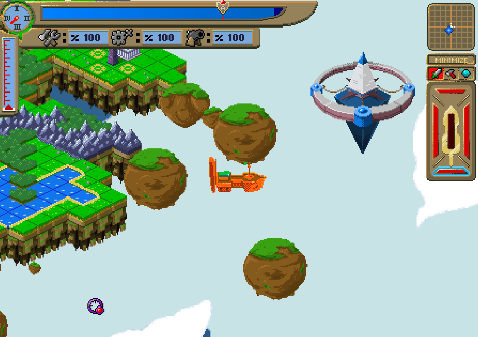 A ride through the winds (and storms) of nostalgia

A Nation of Wind is a remarkable accomplishment. Created as a solo project by indie developer Jameson Wilkins, it combines real-time strategy with “arena shooting” in a game that evokes memories of classic god-games like Populous and Powermonger. But while it shows great potential, and my hope is that one day it evolves into a great game, at this stage in its development it’s just not quite ready for prime time.

Fair is fair, and to be fair, any game that’s made by one guy deserves some allowances, especially when it’s as ambitious as A Nation of Wind. And in many ways, it succeeds. It looks and sounds like something straight out of the late 80s or early 90s, and the strategy portion of the game is varied and complex. The game world is wonderfully unique, boasting the sort of creativity that’s rarely seen in modern mainstream videogames, and there’s enough meat on the bone to keep those who stick with it busy for hours. In 1989, with a big box, a thick manual and an overly-complicated setup process, this thing would’ve been huge.

A Nation of Wind puts you at the helm of a great airship and places a weighty responsibility upon your shoulders. You must colonize a series of airborne island worlds, establishing mines, temples, town halls and more, and defend them against a wide variety of bizarre creatures that includes gigantic flying seahorses and alligators, massive, menacing snails and even (relatively) little ant-type things that come up from holes in the ground. Ultimately, your task is to capture a series of obelisks on each island, which will place it firmly and permanently under your control and open up adjacent worlds for further conquest.

Like most real-time strategy games, you’ll have to collect resources in order to build your units and keep your airship armed and repaired: gold, food, wood and stone. The early priority, naturally, is to build units that will keep them all flowing, and it can be quite a task to stay out of trouble when you first begin. It’s all too easy to run dry before you’ve taken any meaningful steps to establish yourself, especially if your ship is damaged by an enemy attack and the auto-repair and auto-replenishment systems gobble up your precious few starting resources. (Hint: go into the options menu and turn them off.)

Once you’ve made it past that initial, delicate starting point and achieved critical mass, you can change gears to grow your colony more aggressively, but defense will always be a priority. You can take on attackers directly with your heavily-armed airship, but until you’ve established watch towers it’s impossible to keep track of everything everywhere. Even with towers, being on the wrong side of the world during an attack can be disastrous. Fortunately, you can also establish a network of defense turrets that very efficiently take care of business when you’re not around to do the job yourself, and damaged units can be repaired after battle.

All units in the game are upgradable, giving them more durability and improved abilities, as are the weapons on your ship. Resources can be bought and sold at the “Skyharbor,” a floating dock that serves as the focal point for each level. A Nation of Wind even has four different schools of magic, accessed by building different kinds of temples, granting fearsome powers that can be used to defeat your enemies or change the very fabric of the world itself.

As real-time strategy goes go, A Nation of Wind is relatively slow-paced. Because you’re in direct control of just one ship, there’s no need to worry about marshaling forces for a decisive blow against the enemy; instead, all you have to do is keep things running smoothly until you can capture some undefended obelisks. And because the end-game requires the construction of a rather large number of obelisk-capturing temples rather than the military destruction of the enemy, it eventually devolves into a relatively dull stretch of waiting for your resources to build up while fighting off the occasional enemy.  It all sounds fairly simple – but trust me, it’s not.

The inherent challenges of the game notwithstanding, much of the initial difficulty arises from the fact that there are virtually no instructions. A brief tutorial level and two-page help screen provide a very basic low-down on how to play, but gamers who don’t like to learn as they go will find it very frustrating. The control scheme is clunky, and the limited number of ship sprites make flying with any kind of precision a tricky proposition at best. Magic feels tacked on, as though the creator felt compelled to shoehorn in Populous-style terraforming options; it might become more significant later in the game but for as far as I played, the temples required to power spells came into play way too late to have any real impact on the action. By the time I was ready to build them, there just wasn’t any point. 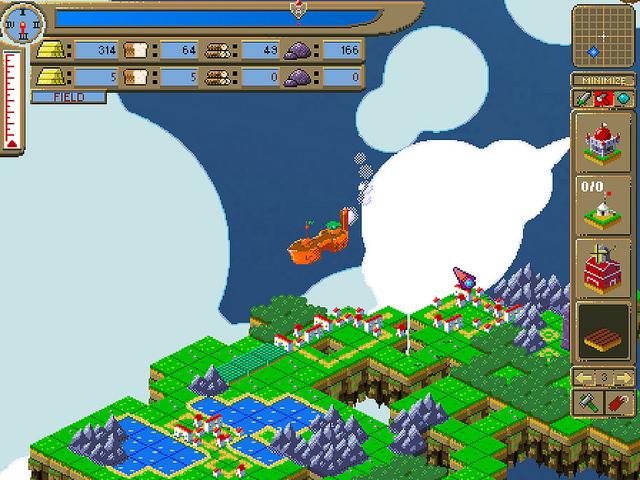 Other issues include the inability to speed up time, the lack of any kind of overhead or radar-type map and a save game system that relies on you to remember what you saved and where you saved it. And in what struck me as a particularly baffling twist, before you can finish capturing each world you must first complete a boss fight against a giant, floating creature that looks as though it was ripped straight out of an SNES game. Aesthetically is fits, but thematically, a bullets-flying boss fight culmination to a fairly complex strategy exercise is jarring to say the least.

But the overall attention to detail is impressive, with plenty of nice touches like animated unit sprites and even crops that grow and change color before they’re harvested, and in spite of the primitive visuals it’s actually very pretty too. It’s unpolished, but A Nation of Wind has some real depth.

A Nation of Wind doesn’t just look like a 20-year-old game, it plays like one too, and despite our sometimes deep-rooted sense of nostalgia, that’s not always a good thing. It’s a difficult and unforgiving game, and one that expects you to put some serious effort into not just winning, but also in simply figuring out how to play. Maybe that’s part of the fun for some players, and if you number among that demographic then this is a game you’re absolutely going to love. The rest of you should consider yourselves warned. It’s a free game so there’s absolutely no reason not to try it, and I suspect that strategy fans who stick with it will richly rewarded. But you’re really going to have to work at it.