Home / Reviews / A Moon For The Sky Review

A Moon For The Sky Review 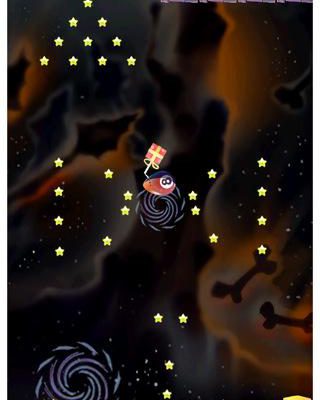 Combining line drawing, physics and arcade style gameplay, A Moon for the Sky doesn’t really bring anything new to the table – but it doesn’t have to. It’s a fun, simple game that sates many different parts of your gaming appetite. Yet while it’s a great gaming appetizer, it doesn’t have quite enough content to be a real main course.

The basic premise is familiar: bounce an object higher and higher by drawing lines on which to bounce a moon up to the skies above. Along the way you’ll collect stars and power-ups while avoiding enemies and obstacles. The faster the time you reach the sky, the better the medal you are awarded, and the more coins you earn for purchasing new levels, moon icons and badges (little icons that hang on a string from your moon).

The gameplay itself is both very fun and very simple. The shorter the line you draw, the higher your moon will bounce. Naturally a longer line will grant you better control, but the best times are awarded to those who dare with shorter segments. The angle you draw will also affect the moon’s upward trajectory. 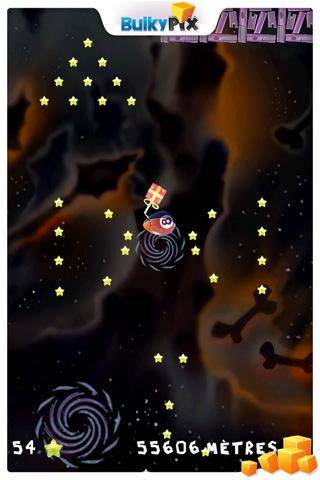 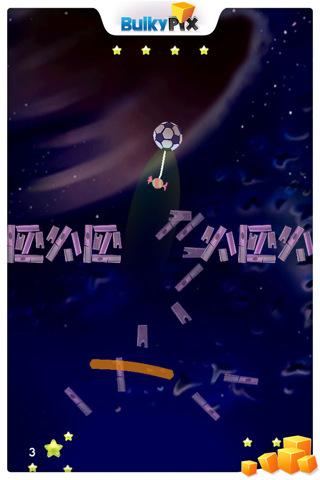 The game also allows players to compete online in the No Limit mode (the endless mode). Here you’ll just keep bouncing higher and higher. Should you fall, you can spend a heart (which can be bought in the in-game store) and keep going from where you stopped to earn an even higher record. When you are done you can cash in your record for coins.

During your ascent, A Moon for the Sky provides power-ups that may help or hinder your climb. You may get an item that accelerates your rate of ascent, or you might get one that turns your moon into a lead weight. This selection helps add a great variety to the No Limit mode.

The main attraction, though, is going to be the Adventure mode: a collection of 18 levels you unlock by purchasing additional worlds. Each level has a time goal, with better medals and higher rewards for faster times. While there are no power-ups here like the No Limit mode, there are special stars that you can collect that stop the timer for five seconds. These are invaluable to getting higher scores. Along the way up you’ll also encounter a number of obstacles, like fans that blow your moon around, UFOs that abduct your moon to drop it somewhere else, bumpers, breakable wooden crates and more. It’s all really fun stuff.

But like all things, what goes up must come down, and A Moon for the Sky does tumble back to earth on a few fronts. While you have 18 levels to play, that’s all you get. The in-game store’s badges and moons are fun to shoot for, and of course you can buy in-game currency with real currency if you wish, but that will simply make a short game even shorter.

A weird thing in A Moon for the Sky is that you collect stars along the way up, but no real reason is given anywhere, and the reward you get at the end of the level doesn’t seem to depend on the stars either. 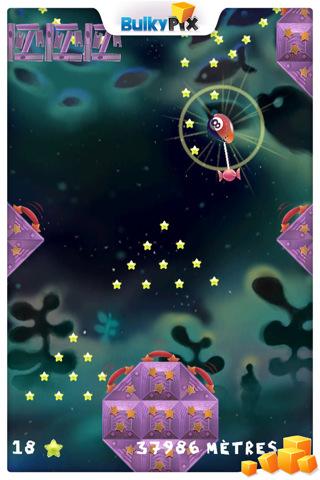 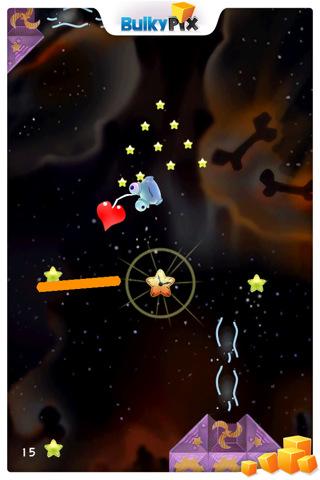 The levels, too, can be extremely aggravating. If you try to bounce too quickly, a ceiling can appear out of nowhere and instantly drop your moon like a rock. Some of the obstacles can also take forever to get around, which is frustrating when you’re shooting for a higher score. You may also spend so much time bouncing around that you just lose your moon accidentally. There is a learning curve here, and you’ll probably fail a lot before getting the hang of it.

On a superficial note, the English translations in this game are pretty awful. From basic spelling mistakes like “Customize your moon in the Profil menu” to odd grammar like “Some of Bonus are traps” to combos platters of “Platnum medails are highest in game. Can you go and achieve them?” A Moon for the Sky is in dire need of good localization. Yes, it’s a small thing, but if a game is designed for an English-speaking audience, spend a little time and money ensuring you’re speaking the same language as them. (Feel free to substitute the English language for any other language and the same sentiment would apply.)

In the end, A Moon for the Sky is a solid twitch game that’s great for on-the-go gaming. It’ll be a short trip, but for the cost of a candy bar, you can do far worse for ways to scratch your gaming itch than A Moon for the Sky.