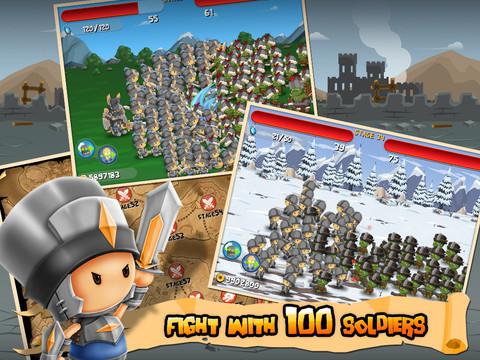 I still can’t believe that keys are far more rare and valuable than gold.

A Little War is a strange beast. It’s not quite a castle defense game, although it definitely shares a few elements with the genre, and it’s not quite a lane-based defense game despite similar reasons. Yet it manages to combine elements from both, and add its own flair, to great effect. It’s just a shame it’s so zeroed-in on the free-to-play model that it’s difficult to keep playing after a while.

Evil dragons are attacking and someone has to fend them off. That’s about all the exposition available in A Little War, but that suits me just fine. This isn’t a melodramatic RPG epic, it’s a strategy game meant to be played in small doses on the go. Players are given control over a small band of soldiers and a single hero as they attempt to drive the invading orcs and dragons out of their lands. Everything starts off fairly simple with only a handful of units and very tiny skirmishes, but after a few levels the gold starts to roll in and everything can be upgraded. Once I was halfway through the second map my hero was decked out in some pretty impressive armor, sporting an unreasonably large sword, commanding a fairly elite army of 60 troops, and more-or-less decimating the opposition.

Commanding the hero and his army uses two main buttons: one to march the grunts forward, and one to do the same with the hero. Tapping them a second time will halt their movement but there’s no way to backtrack. A couple of other buttons can be used to activate the hero’s special abilities (up to three can be equipped at a time with a fourth unlockable slot) or use consumable power-ups, but mostly it’s about knowing when to advance and when to stay put.

A Little War sports over one hundred levels, all of which can be replayed over and over again for more cash. Each one ramps up the difficulty and will keep players on their toes with a large variation of enemy loadouts. One may involve an army of axe users and an enemy hero with abilities that absolutely devastate the smaller units. Another could use ranged soldiers and have some rather nasty moves that do direct damage to the hero. It’s never the same fight twice, and savvy players will have to spread their upgrades around a bit if they want to have a fighting chance. Fortunately the price of failure is zero, so there’s no harm in testing the waters in the next stage before deciding whether or not to bolster the army, upgrade an ability, buy thicker armor, etc. 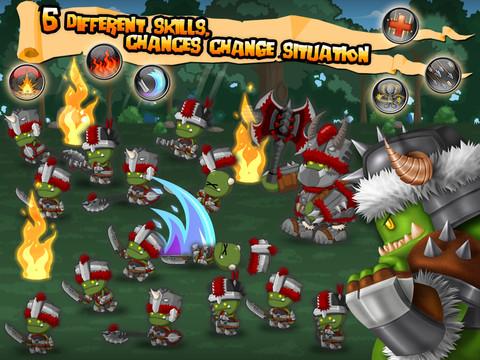 The diversity among the level’s enemy ranks is a double-edged sword, however. It certainly keeps things from getting predictable and stale but it also means players will often have to jump into a level they’re unprepared for, most likely lose, then change their armies up before trying it again. Some kind of pre-fight info on the orcs could come in handy in these situations. But that’s just a pet peeve, honestly. What really gets old fast and makes A Little War almost irritating to play at times is the camera. I wouldn’t have thought a 2D game could have camera problems, but it jumps all over the place. When the hero activates an ability, it zooms to him, then to the ability’s effect. The same goes for the enemy hero. In later levels when both heroes are using three abilities apiece it can become incredibly frustrating to keep the camera centered on the action.

Another rather significant issue I’ve noticed is that everything relies a little too much on a free-to-play economy. Treasure chests dropped during a fight or by the little elf that functions as a cash-grab mini-game usually contain quite a bit of gold, but they can only be opened with a key and keys are incredibly rare. So rare, in fact, that I’d acquired close to one hundred chests before finding a single one. There’s an option to buy keys, of course, but the proportions seem way off when I’ve got 100 chests and it costs $0.99 for three of the little buggers. Acquiring gold also gets pretty tough as replaying older levels nets you roughly 10% of what was earned the first time they were completed, thus not-so-subtly urging players to buy more gold. 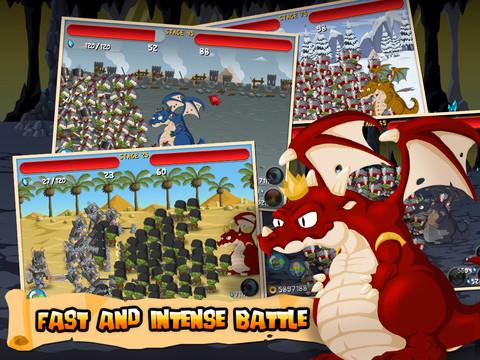 A Little War is fun and offers up a surprising amount of simplistic strategy once things really get going. It’s also pretty cute and the way the soldiers’ and hero’s appearances change as they get stronger is pretty awesome. It’s just a shame that it pushes the whole “freemium” thing so hard, as it sometimes gets in the way of simply having fun.