A Kingdom for Keflings Review 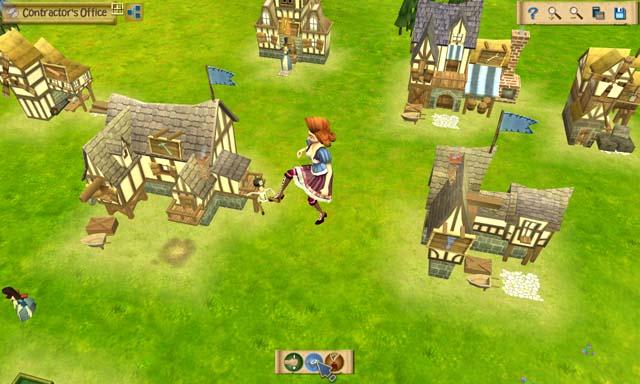 Originally released through the Xbox 360’s Live Arcade service a year and a half ago, NinjaBee’s quirky city builder, A Kingdom for Keflings, has finally come to the PC as a polished and full-featured port that stands out from other games in the genre on the Windows platform.

Players start by choosing a giant who, for all intents and purposes, is a god to the Keflings, little people who unquestioningly follow our every command. The goal of the game is help them (or have them help you, depending on your perspective) build a kingdom composed of houses, workshops, guilds, schools, statues, walls, and plenty of other structures leading up to the thing the Keflings want most of all: A castle.

Job number one is to assign tasks to your denizens by picking them up and setting them down on the trees, stones, sheep, or rocks you want them to harvest. You’ll also need to place them in certain buildings to activate them, and on products and resources you want them to transport elsewhere. They’ll dawn a hat appropriate the task they’ve been assigned and repeat it until you tell them to do otherwise. To get them to change tasks, just pick them up, flick off their hats, and set them down on something else.

You can also kick them if you like, but it doesn’t really serve a purpose aside from humor. And, since they continue to love and serve you regardless of how you treat them, booting these hard working little souls just feels wrong; a bit like an evil master abusing a dog.

Once resources have been harvested they can go to a number of different buildings, some of which will process them, transforming logs into planks or stone into bricks, others of which will manufacture the various parts—towers, libraries, and offices, etcetera—necessary to construct new buildings. There are also some buildings that exist just to let you customize the look of your town, like an artist’s plaza that allows you to paint your buildings different colors.

Building up your kingdom is a little different than most city builders, but not more difficult. Players first examine blueprints, which can be easily accessed from the field while playing, to determine which parts are needed for a specific structure. They then order the required bits from the proper facilities and arrange them on the ground according to the schematic.

There’s no set order for the buildings we create, but blueprints need to be unlocked, so we can’t just go straight to building a castle. Plus, there will be times when you have access to a blueprint but cannot build it yet because you haven’t found an item necessary to harvest a new material, such as shears for wool, or you haven’t constructed another building needed to manufacture a specific part. 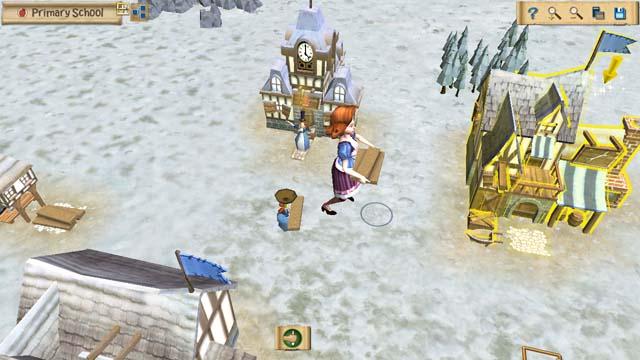 Not to worry; there are several things you can do when this happens. You can wander around the relatively small map looking for new items, like textbooks that can be placed in schools to educate citizens who can then be used to activate buildings that require more learned occupants.

Or you can go to the kingdom leader, who often has little missions for you to complete, such as moving materials from one place to another. As a reward, you’ll earn a heart (representing the love necessary for a good home to flourish) and gain access to a couple of extra Keflings.

Or you can give the Keflings a hand in their tasks. I found this was what I spent most of my free time doing. Giants are much faster and stronger than the Keflings, so sometimes it’s easier to just haul stuff around yourself. It’s not the most engaging thing you can do in the game, but helps things get done a little quicker.

And that leads to one of my few issues: It can get repetitive. Our reward for constructing buildings is usually just another blueprint for another building, which typically involves many of the same activities as before.

That said, the satisfaction that comes from watching a pretty little town filled with busy little citizens is genuine. It’s perhaps even more gratifying than in many other casual city builders because of the graphics, which are highly detailed and rendered using polygons instead of sprites, giving the city a deep and believable three-dimensional quality.

It’s worth adding that if you’ve already played A Kingdom for Keflings on the box 360 there’s not much reason to revisit it here. It’s a pretty faithful port, complete with a multiplayer mode that allows players to join or be joined by up to three others to work simultaneously on a single kingdom. (Alas, I was unsuccessful in hooking up with other players when I tried, perhaps because no one else was playing at the time.)

The only significant changes I noticed were the lack of an achievements system—which I missed; trophies and medals can provide motivation to try new things in a game—and an inability to use custom Xbox avatars, though there are four new pre-made giants to choose from.

Of course, there’s also a new mouse-based interface, and it’s better suited for many of the game’s actions, such as selecting menu items. However, I was annoyed that I wasn’t able to move the camera around the map by mousing to the screen’s edges. Long jaunts meant that I needed to either constantly click in front of my giant or use the arrow keys to move around.

But my complaints are mostly minor. A Kingdom for Keflings is a gentle, go-at-your-own-pace experience that ought to satisfy the creative cravings of most city building fans.