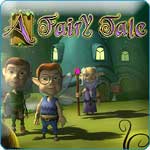 Here at Gamezebo, not a day seems to pass without one critic or another bemoaning the lack of innovation in today’s casual games and begging for something new. Enter A Fairy Tale, which – despite its unassuming name – answers the call by providing an enchantingly novel approach to pattern-matching puzzlers. Albeit a tad easygoing and repetitive, we can’t help but applaud the creators for introducing audiences to a fresh style of action that makes an elegant counterpoint to the usual gem-swapping monotony.

Despite occasional comic scenes attractively displayed as pages in a fantasy storybook that are utilized in lieu of a sweeping narrative, never mind the title’s humdrum plot. Centering on a group of fairies, including the charming Delfbert (“Delf” for short), and their quest to foil an evil monster, you’ll be much more surprised and delighted by the actual hands-on excitement itself. Thank a setup which sees you visiting dozens of individual, self-contained stages set in mystic forests, wooded glens and other attractively-rendered fey locales. In fact, presentation’s one of the title’s strongest suits, as flowery bursts of fireworks, shooting bolts of light and fluttering pixies add considerable charisma to every stage.

To begin with, you’ll find yourself facing a grid of squares, laid out in varying shapes. Some of its tiles contain colorful runes; others remain blank until flipped over. To remove enough tiles from the board to fill a potion bottle enough to reach the next stage (one’s core objective), you’ll have to pair groups of identical hieroglyphics.

Simply click on one or more heart- or sun-shaped glyph, for example, and as long as you click on another, similarly-branded tile or set (all adjacent squares of the same type are automatically grouped), they’ll vanish with a sparkle. Should a gap result, higher-positioned runes will fall downward to fill it. If tiles become unattached to the rest of the board, they’ll instead come crashing down as a complete set, creating opportunities to boost your score and level completion speed by landing massive combos.

Also worth noting: Remove a tile, and those next to it flip over, affording you greater visibility (most of the time, you have no idea which symbols will appear next) and more potential moves. The more tiles you eliminate, the more the grid descends downward, keeping the action moving along.

Making the process more interesting are the regular introduction of obstacles from flowered-covered tiles to dwindling stage timers and fairies trapped in webs that impede forward progress. Likewise, extras such as bombs and power-ups that let you eliminate large groups of squares, destroy entire vertical rows and remove all visible glyphs add to the fun. There’re even bonus games based on memory and observation to liven things up between certain levels, and collectible gems that boost your rank.

But as laidback, unique and enjoyable as the proceedings prove, don’t play the game in marathon sessions. Best sampled in small bites, it does a decent job of regularly introducing new twists and turns, yet seldom proves overly challenging or delivers a pressing sense of urgency. As such, the outing remains a casual game in the truest sense of the term. Aiming more to evoke a whimsical atmosphere and mellow vibe than anything else, it won’t dazzle or instantly gratify so much as simply soothe and amuse.

That’s not a bad thing, per se – from core gameplay itself to supporting sequences, bonus features and character animations, the craftsmanship here is clearly of superior quality. There just isn’t any of that magical je ne sais quoi about the tale that makes you pine for one more go. Play it in brief spurts when it’s time to kick back and relax though and we promise you’ll be entertained. As the no-frills title clearly foreshadows, A Fairy Tale offers a charming spin on the usual matchmaking formula, but none of the truly spellbinding stokes of genius common to genre classics.

If you liked this game, try Fairy Island, 4 Elements, and Elven Mists 2.