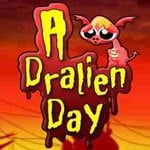 It's not hard for point-and-click adventure games to overstay their welcome. Hours of doing similar tasks and solving similar puzzles can often be tiresome. But A Dralien Day doesn't suffer from this problem. In fact, this free Flash game can be beaten in under an hour fairly easily. But while it lasts, A Dralien Day is a fun and charming ride.

You take on the role of a baby dragon-like creature. Before you've even hatched, your mother has been captured, and it's up to you to rescue her. You literally have to hatch yourself in the beginning, rolling your egg out of the nest to crack your way out. From there things are pretty straightforward. You solve a number of puzzles along your journey and the game goes to great lengths to make them as easy as possible. Every object in the game that you can interact with is highlighted, so there's no hunting around for what you need to do next. Everything is laid out for you pretty clearly. But if you do happen to get stuck there is a handy link built in the game that leads you to a walkthrough.

Interspersed between all of the puzzle solving is a pair of action sequences. Both involve flying some sort of craft: in one you attempt to maneuver around obstacles while the other has you fending off enemies with the ship's gun. What's great about these sections is that if you aren't particularly adept at action games, you're given the option to skip them after each time you fail. The only penalty is a reduction in your final score.

Though there's no spoken, and very little written, dialog in the game, you still form a strong attachment to the tiny protagonist. This is due largely to the wonderful visuals. The baby dralien is small, cuddly, and sports the biggest set of puppy dog eyes you will ever see. It's hard not to feel sorry for the little guy who's forced to search for his mother just seconds after his own birth. And when he dies, well, it just breaks your heart.

Likewise, the backgrounds and other characters all go a long way to help create the strange alien world you'll briefly explore and make it feel convincing. The visual style is simple and subdued, but striking at the same time.

The only real drawback to A Dralien Day is that it's simply too easy. Since the game very clearly marks what to do next, it's tough to get lost. Only the action sequences provide any semblance of challenge and these aren't even necessary to complete the game. The game is short enough as it is, but when you factor in the lack of challenge, the experience simply breezes by.