Home / Reviews / A Brief History of the World Review 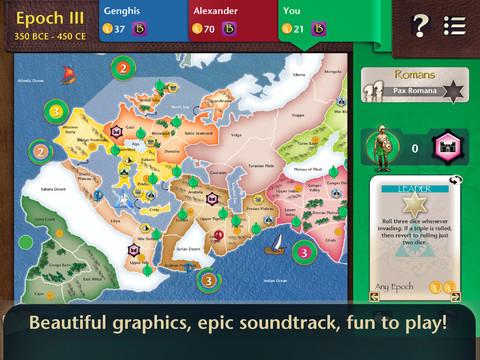 A brief slice of history in the making.

There was once a board game called History of the World. It was popular enough for mass-market release and a hobby edition with plastic figures instead of cardboard tokens. More recently, designers the Ragnar brothers decided it needed modernising and streamlining, creating A Brief History of the World, which has now been modernised and streamlined for mobile devices.

A Brief History of the World is a very peculiar world conquest game. Rather than the usual setup of players controlling a single empire and vying for dominance, the game is broken into six epochs and each player controls one historical empire for the duration of their turn. They place a capital, use an allocation of soldiers to expand outwards, and then score what they’ve conquered before passing to the next player. Next turn, they’ll still own what they previously annexed, but those territories are passive and no longer usable as a base for expansion.

This paradigm shift takes some getting used to. It feels odd at first that you can represent the Shang Dynasty of China one turn and then be Hitler later on, spreading your baleful influence through Europe while still holding and scoring territories in the Far East. But it offers a solution to the problem of conquest games turning into sessions of “Let’s You and Him Fight,” because no one can be sure where their next base of expansion will be.

Once you’ve internalised the oddities, it’s a clever and engaging strategy title that gives you the timeless pleasures of expanding and brutalising your neighbours without the tedium of endlessly securing defensible map features. Most empires have particular special abilities that characterise them, such as the Egyptian propensity for turning resources into monuments which then score bonus points.

To add to the variety and historical flavour, everyone gets an event card in addition to their Empire each turn, such as “disaster” which destroys one city. There are even events which are tiny empires in their own right, with nothing more than a capital and one or two armies to expand with. But these are still enormously powerful because they instantly displace any other player’s soldiers who are in the capital territory. 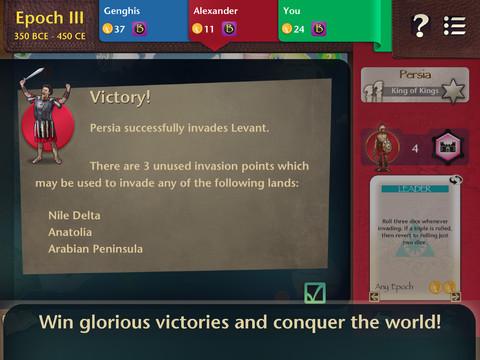 Indeed, for a game in which each player takes a wholly self-contained turn with no reference to their opponents, there’s an impressive level of bloodthirsty interaction.  If you want a territory outside your empire or kingdom capital, you have to fight for it. Pleasingly, unlike many modern strategy games, A Brief History of the World is not afraid to arbitrate this via dice, and an accumulated bonus for repeat failures mitigates the worst of the unpredictability.

That same structure of self-contained turns makes this an ideal candidate for asynchronous play over the internet and developer Sage hasn’t let us down. There’s a simple GameCenter matchup feature, either automatically or against invited friends, and games can proceed slowly or in real time as required.  You can also play face to face against other people, and this digital version slashes the play time required for what was originally quite a long game.

It’s fortunate that it’s so easy to play against other humans, because the supplied AI for solo games seems regrettably weak. I was able to handily beat two computer opponents on my very first play, before I even understood the rules properly. The tutorial I’d first sat through did a reasonable job of explaining things, but there were still details I felt I needed to check out. Thankfully the app provides in-game rules text, so they were only a click away. 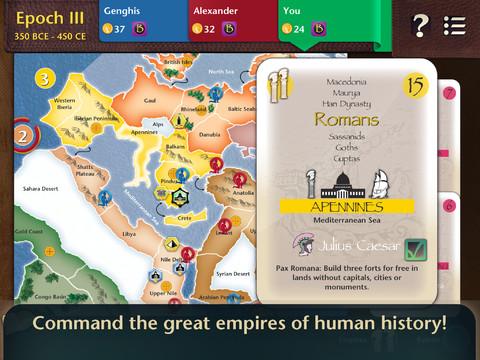 Once you’ve got them down, you may still be confused because a number of minor bugs in the game mean rules are not always implemented as expected. There are also some stability issues, especially on the original iPad, although a handy auto-save feature means these are nowhere near as catastrophic as they might have been, and the developer has a good track record of updating and improving their apps.

They’re not quite so good with presentation. Everything here is perfectly usable but hardly attractive, although weak art in the original board game is partly to blame. No such excuses can be made for the sound, however, which consists of a few stock samples and an irritatingly repetitive soundtrack.

These shortcomings are hardly ruinous though, even if the game would benefit from some early updates. Neither is the poor AI as much of a problem as it could have been, thanks to the way in which the simple joy of trampling your foes into the dirt manages to make empire-expansion games compelling even when they’re too easy. Sage’s track record means they get the benefit of the doubt on those upgrades and fixes, and their game gets a cautious recommendation.