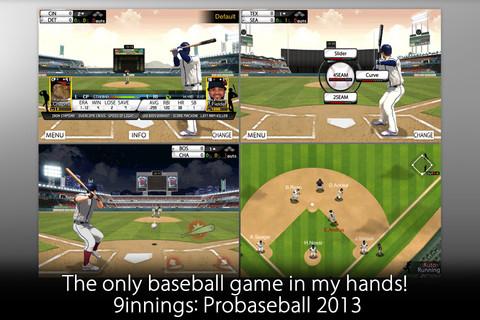 A baseball game with a bit of everything

Games that try to be all things for all people naturally make us a little skeptical. So if I said that there’s a mobile baseball game for iOS and Android devices that blends simulation, action and fantasy sports together, I wouldn’t blame you for giving a Dwayne Johnson-esque raised eyebrow in response. The thing is, 9 Innings Pro Baseball 2013 blends all of these elements of the diamond together into a pretty satisfying whole.

Where to start? Well, as a fully-licensed product of the Major League Baseball Players Association, 9 Innings Pro Baseball incorporates the names and photos of all of the current big leaguers. The team names are limited to cities only and the magic digital airbrush has removed all team logos, but everyone on an MLB roster at the beginning of the 2012 season is in the game.

Picking a team and starting a season, you’ll have a full 25-man roster at your disposal. All players are rated in a number of categories to ensure relative statistical accuracy, so squads like my beloved Houston Astros start out appropriately mediocre. The season itself can be played in full or in smaller chunks as you see fit.

In each individual game, you’ll be presented with an impressive amount of options. You can choose to play offense only, defense only or both, and any portion of the game from a half-inning to the whole thing can be simulated at any time. Games can also be saved in progress and resumed later, a very welcome feature to see in a mobile title.

Batting controls are fairly simple, requiring you to simply tap a bat icon right when a pitch is arriving at the plate (and ideally in the strike zone). Bunts can be laid down by tapping icons toward the first- or third-base lines, and runners can be told to steal by tapping on them as well. It’s all pretty intuitive and responsive.

“Pitching isn’t too much more difficult. Every hurler has up to five different pitches to choose from, with a visible meter to let you know how effective each one can be. A tap to choose the pitch and another to select the location is all you need to send it in. Defense can be set to be fully automated or to allow some manual control, mostly calling on you to guide where and when to throw fielded balls.

In-game achievements help you rack up points that can be spent on equipment that can boost your team in different ways, like giving you a chance to see pitch locations before the ball gets to the plate. Naturally, this starts getting 9 Innings a little bit further away from being a strict simulation, but that’s not really the game’s aim anyway.

Points and stars, the premium currency, can both be purchased for real money to buy equipment or use with the game’s card system, which adds a fantasy aspect to the proceedings and ratchets up the complexity even more. Two types of cards (which can also be earned in-game) can be collected: more powerful versions of the players already on your team, plus players from other teams. That means you can eventually compile a virtual all-star team, if that’s the route you want to take, though sticking with athletes from your selected franchise rewards you with some stat bonuses. 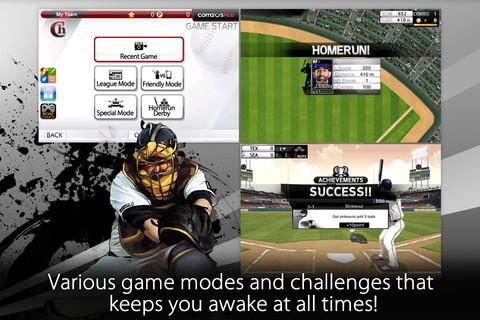 “In a method not unlike the one found in the Facebook game Baseball Heroes, threeplayer cards of equivalent rarity can be combined into one better player. Actually, exchanged might be a better word, to avoid any images of a bat-swinging Frankenstein’s monster. For a price, individual players can also be boosted, though there’s a chance the process may fail and limit the card’s potential in the process. Topping everything off, cards can be sold to other players through a market system.

If your head isn’t swimming yet, it may be when you learn that 9 Innings Pro Baseball throws you to the wolves somewhat to learn all of it. There are tutorials for all modes, but they aren’t always easy to learn. There’s a definite sense that some familiarity with previous games in the series is assumed, and because the card system is new for this year, even that may not be enough help. 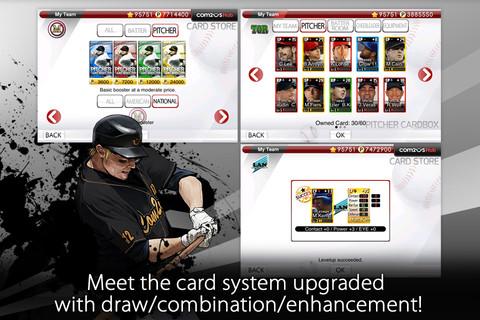 Graphically, the action on the field isn’t quite console quality, but it’s not too shabby for a mobile game. Animations are fluid and the player photos are excellent, though the players do hearken back to an earlier, more pixelated era when they are actually running around on the diamond.

Being a jack-of-all-trades usually makes you a master of none, but 9 Innings Pro Baseball 2013 manages to make this approach work. If you aren’t intimidated by the sheer number of options, it’s worth a free download (for the ad-supported version) to dive in and explore.