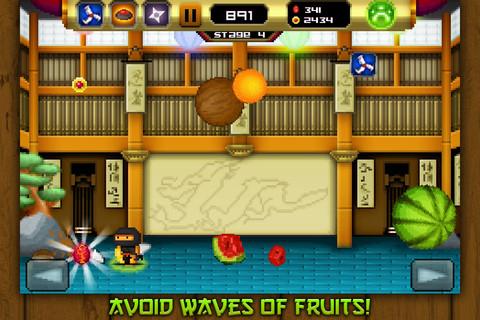 Ever since Halfbrick released Fruit Ninja, the produce industry has been plotting its revenge. This week, with the help of Dogbyte Games’ 8bit Ninja, fruit unleashed its master counter-offensive against ninjas the world over. Bad news? The plan pretty much consists of “fall from the sky.” Good news? The game that results is addictive, reflex-driven fun.

All conspiracy theories aside, 8bit Ninja puts the obvious reference to use in a much different package. Rather than Fruit Ninja, players of retro classics will recognize shades of Capcom’s Buster Bros. For everyone else, think of a power-up fuelled mad dash back and forth across the screen, as you dodge and destroy incoming projectiles.

In this dojo, you need only master the ways of the left and right arrow as you help 8bit navigate the vitamin-C minefield. For those who love the novelty, tilt controls are also available, but when one misstep can mean the end of a round, you’re best sticking to the path of the touch screen. (Also, let’s be honest: tilt controls make you look ridiculous.)

Beyond the standard back-and-forth, everything in 8bit Ninja is blissfully automatic. Power-ups drop sporadically from the top of the screen, and touching them activates anything from fruit-slaying fireworks and shuriken to a protective shield. They may be delicious and nutritious, but fruit just can’t catch a break.

Luckily, that’s not the case for Dogbyte Games. Among a sea of Fruit Ninja references and low-fi attempts at greatness floating around in the App Store, 8bit Ninja succeeds where so many others fail: simple, effortless addictiveness. Basic controls make the game instantly accessible, as every dodge raises your confidence that you’re about to set a high score. When that wayward lemon proves you wrong, you won’t think twice before you’re back at it again.

Meanwhile, Dogbyte takes a queue from another Halfbrick staple, Jetpack Joyride, infusing the game with variety in clever ways. Instead of acting as a pointless avatar, 8bit is a character you can level up, and every micro-game nets you more experience. Each new level brings with it a stronger character “special” – in the case of 8bit, a handy-dandy fruit reflector. So in place of just a high score, it’s honed ninja powers you’re chasing, adding light RPG depth to the experience.

Speaking of powers, 8bit Ninja mixes things up nicely with a stable of three bonuses that you can swap to match your play style. Looking for a more powerful ninja? Concentrate on using and upgrading the coin and XP bonuses, which dole out more of each every time they’re hit. Going for a high score blitz instead? Strap on the spinner blade, land mine, and firecracker to be the last one standing (or at least running around). 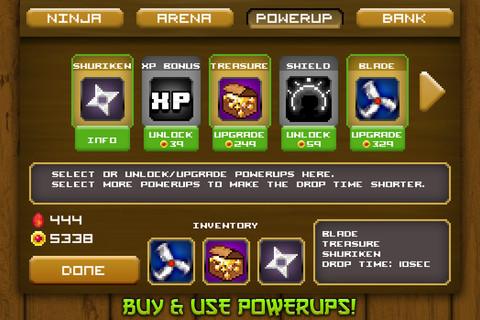 Like any freemium game, 8bit Ninja wants you spending coins – or premium dragon eggs – to supercharge your play experience with stronger power-ups, more arenas, and better characters. In a nod to Nimblebit and Tiny Tower, however, Dogbyte generously rains coins down from the heavens during each game, leaving you well equipped to upgrade at a fair pace.

With that said, they also lock up new stages and ninjas behind painfully infrequent dragon eggs (I’ve played for three straight hours and gotten only 12). While I have no problem paying for interesting content, that leaves those who don’t want to shell out occupied with a stock level that feels stale at times.

Putting it in perspective, though, the game is barely a week old, and like Fruit Ninja, is ripe for more modes (and terrible puns, evidently). With a price of entry that can’t be beat, and a rare je ne sais quoi, 8bit Ninja comes highly recommended. You might just find it sneaking up and becoming your new iOS addiction.

On The Wind Review