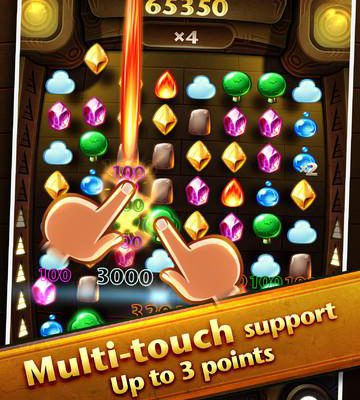 It’s hard to expect any sort of real innovation in match-3 games nowadays.  You’ll either get a game that sticks with a tried-and-true match-3 formula, or a match-3 game that’s mashed-up with another genre.  Fresh thinking, like we saw in last year’s PC release Atlantis: Pearls of the Deep is the exception rather than the rule.  We’re pleased to report that 7 Elements is another one of those rare exceptions.

Seemingly built from the ground up with the iPad in mind, 7 Elements introduces a twist so simple that we’re shocked nobody had ever thought of it before: multi-touch.  Rather than moving one gem at a time, players can move up to three gems simultaneously using different fingers.  This forces players to take a whole new approach to a familiar game, thinking about it in ways they never have before.

It takes a little getting used to – and admittedly I was never able to master more than two fingers at once – but having the option to move multiple gems at the same time opens up myriad possibilities.  You can slide two gems in just the right way to turn a chain of 4 into 5, make matches in different locations simultaneously to drive up your score faster… the opportunities reveal themselves to you as you play. 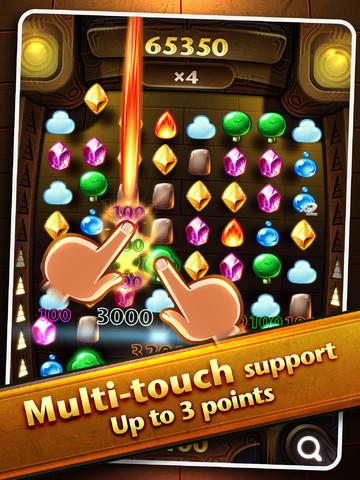 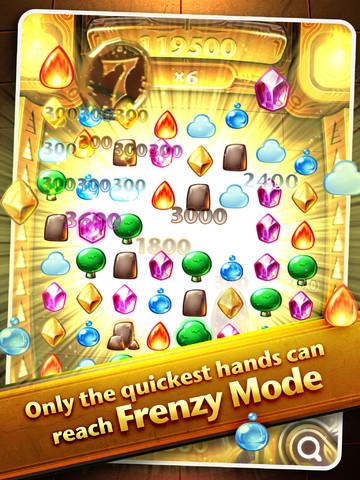 In addition to the multi-touch feature, 7 Elements offers a nice twist in the power-ups that certain combinations of gems can make.  As you can probably guess from the name, there are 7 types of gems on the board that each correspond to a certain element.  Make a match of four or more like-colored gems, and you’ll create a new gem based on that element.  Match that new gem and you’ll activate a special power.

Each power is related to the element you’ve matched.  Water, for example, will rain down on the gems below it, washing them away, while gold will award you coins that you can spend on special power-ups at the start of each round.

It’s these special power-ups at the start of each round, though, that ultimately tarnished the stellar experience we had with 7 Elements.  By and large they lack excitement (even after fiddling with each, I didn’t feel compelled to use them again), but they require coins to purchase every round.  In a free-to-play game like Bejeweled Blitz, this is a completely expected practice.  But since 7 Elements has launched as a paid download, expecting players to cough up more money if they want to use power-ups (yes, coins are available as in-app purchases) feels a little bit sleazy and tacked on.  You’re not going to be earning coins hand-over-fist in the game, so if you do want to use these power-ups, you’ll either do so sparingly or shell out some additional cash.

Still, minor quibbles about IAP’s aside, 7 Elements is a well-polished match-3 offering that tries something new and succeeds admirably.  The production value is top notch, the multi-touch makes us rethink our well-worn match-3 strategies, and the “gotta beat my high score!” compulsion is in full effect.  If you’re a match-3 fanatic with an iPad and want to make your fingers tango all over the screen, consider 7 Elements a must play.