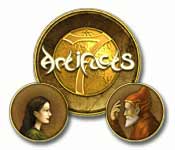 Ancient Greece has been the setting of many a casual desktop amusement, and once again it does due diligence in 7 Artifacts. A pattern-making puzzler that’ll challenge your mind as much as it will your patience, the game scores with a stunning presentation and range of interesting extras. Unfortunately, it’s also not the sort inclined to push the bar, relies mostly on gimmicks to engage the player and boasts less than stellar translation work, making the title a fun, but ultimately fleeting diversion.

Per a tale told via scrolling text superimposed over workmanlike still pictures, you’re Lydia, apprentice to the sage Arcanius, who’s called upon to help make sense of a mysterious parchment and chest of jewels. Your fellow mortals suspect a conspiracy – it is a time when mischievous gods wreaked havoc on mankind, after all, according to historical legend – and it’s up to you to decipher the conundrum.

No brainteaser-style challenges here though, unless you count memory-based mini-games, which appear periodically. This puppy’s a straightforward match-three mindbender cast in the classic mold, as you consistently attempt to swap two gleaming gemstones at a time to create horizontal/vertical rows of three or more like-colored baubles, which then disappear from play. Per usual, higher situated gems (each board’s a grid of stones set atop a bland, non-interactive background image) then fall down to close any gaps, offering up potentially massive chain reactions. And, of course, letters appear randomly at the top of rows on occasion, with your goal being to bring them to the bottom of the screen before a ticking timer strikes midnight.

Neither particularly interesting nor innovative in terms of gameplay basics, 7 Artifacts shines for its first-rate presentation, including both attractive visuals and a soothing orchestral soundtrack. Also of note: The multiple treasures referenced in the game’s title, which can be accessed by creating multiple matches using the same type of jewels in succession.

Remove several rows of green emeralds, for example, and the "Herald of Fortune" artifact is activated, generating random bonuses on-screen that can be tapped for gem-clearing aid. Obliterate the blue diamonds associated with an ice-based artifact instead, and the entire display freezes, letting you swap any gems you like, setting yourself up to reap huge rewards when the playfield thaws out seconds later. Other relics blow up random gems in the middle of the screen, destroy petrified jewels or summon ghosts who, when freed by making matches using the stones they inhabit, allow you to access useful hints.

Taken in tandem with power-ups – created by matching four or more gems in one fell swoop, and yours to utilize with a click of the mouse – it all makes for an enjoyable, if relatively short 50-stage ride. Then again, even with helping hands like explosive gem-clearing meteors; horizontal, vertical and cross-shaped row-clearing lightning bolts; wild tiles that match with any jewels; and gem-repainting elementals, the adventure is hardly groundbreaking stuff. Mind you, the storyline, told in pidgin English (seriously, you’d think someone fluent in the language would at least consider playing these games once or twice before publishing them) won’t captivate either. Nor will expert-level enthusiasts find their skills especially taxed to boot, since new letters can only appear at the top of stacks with available openings, and a clever player can effectively control their incoming placement.

Regardless, in terms of enjoyment factor and overall production values, we can’t fault the title – it delivers precisely the sort of thrills and spills you’d expect from a routine outing in such a well-populated category. But outside of audiovisual elements and the artifact system, the game never attempts to excel, and as such comes across as cute, but also wholly forgettable in the grand scheme of this year’s holiday shuffle. Try before buying, and see if it’s to taste – there’s much to like about 7 Artifacts, but plenty of other games pull off its shtick better, and that’s all we have to say about that.