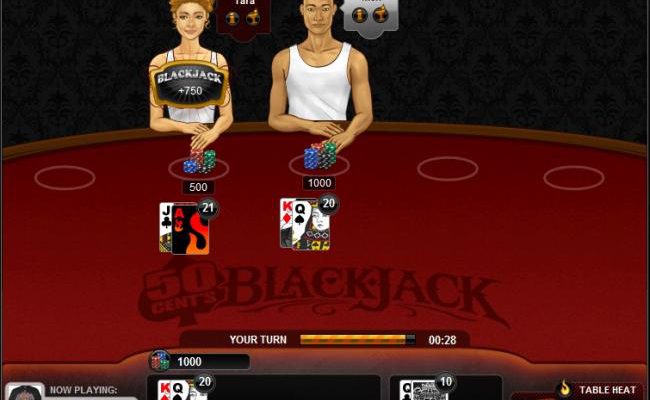 The title of 50 Cent’s Blackjack tells you pretty much everything you need to know up front. It’s blackjack, presented by the rapper/actor/businessman. If nothing else, this relatively no-frills game of 21 proves there’s life beyond slots when it comes to casino-style Facebook games.

Your first visit to 50 Cent’s Blackjack will get you a brief greeting from Mr. Cent himself (real name = Curtis Jackson). You receive a generous amount of starting chips, plus the chance to customize your in-game avatar’s gender, skin tone, eyes and hair. All of these characteristics can be changed later, so there’s no need to sweat the details too much. 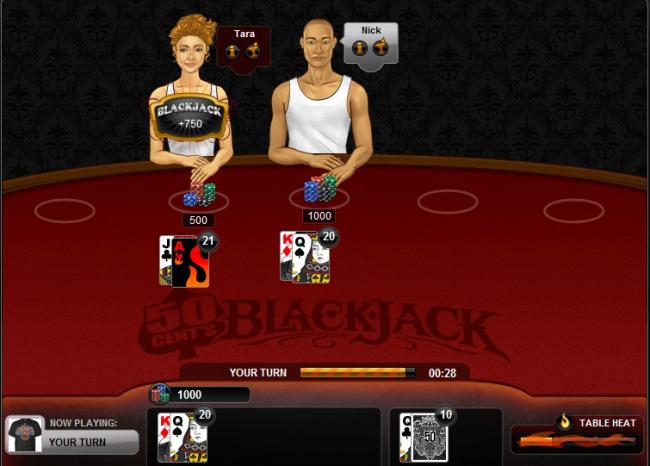 After that, it’s off to the virtual card table for an introduction to 50’s house rules. They’re okay as blackjack rules go: Blackjack pays 3:2, dealer stands on soft 17, pairs can be split one time (though you can’t double after splitting) and you can double down on any first two cards. The game even offers surrender, something that I got laughed at for asking about last time I was in Atlantic City.

The rules state that it’s an eight-deck game, and you hear the dealer shuffle every so often. We’ll assume for the sake of argument that’s actually true. Besides, who would argue with 50 about it? That guy is jacked.

Of course, it would merely be a blackjack simulator if there weren’t a few things to jazz up play, and the most interesting one is the Heat meter (no relation to 50’s ultra-violent song of the same name). As players win hands or get blackjacks, the Heat meter increases. When it’s full, all 2s left in the shoe become Aces for 90 seconds. You won’t find that offer at your local flop joint.

The other goodies are called Boosts, which you unlock as you level up by playing more hands. Boosts allow you to deviate from normal blackjack rules in various ways, including revealing the dealer’s hole card, finding out if the next card will bust you, splitting any two cards and doubling down further into a hand a la Spanish 21. Again, no casino on Earth would allow the player to have these kinds of edges, but they do spice things up a bit. 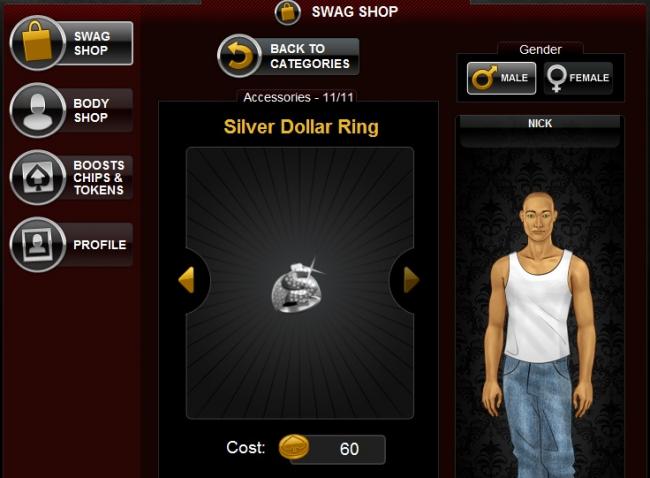 Boosts are available in exchange for tokens, which you earn at the rate of one per blackjack. Tokens can also be spent at the Swag Shop, which sounds a lot more exciting than it is. Swag in this case is clothing and jewelry to allow your avatar to upgrade from the undershirt and jeans he (and maybe she, too) wears to start. This could have been a cool place to see some real life brands show their stuff, but it’s all generic gear instead. As you might expect, you can purchase chips and tokens with Facebook credits if you’re so inclined.

Speaking of generic, there’s some roughly hip-hop-esque music playing in the game at all times, but nothing of the caliber you’d expect from a man who’s sold millions of records collaborating with the likes of Dr. Dre and Eminem. And while it’s true that most of 50’s songs aren’t appropriate for an all-ages Facebook crowd, it would have been nice to hear some instrumentals or something.

At least you can bob your head at the table alongside other real players, though the room doesn’t seem to be overflowing with card sharks just yet. The game did seem to slow down some handling multiple live players at one time, and whether you feel like waiting for other players to make decisions just to be able to chat with someone while waiting for the Heat meter to refill is up to you.

Short sessions of 50 Cent’s Blackjack might be good to hone your basic strategy for free, but otherwise there just isn’t a whole lot to do once you get over the coolness of the Boosts. Unlike those omnipresent slots apps, there aren’t even other games to play. There’s no doubting 50’s business acumen, but if you put his Vitamin Water deal at one end of the spectrum, this game falls somewhere toward the other end.