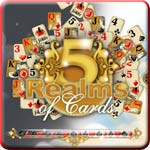 Buried somewhere deep within 5 Realms of Cards is probably the traditional game of Solitaire that Windows users everywhere know and love. But the game has gone through so many twists, turns and tweaks that finding that original kernel is pretty hard to do. Not that this is necessarily a bad thing.

The setting for 5 Realms of Cards is straight out of a fairytale, or Lewis Caroll’s imagination – it’s hard not to think about the walking, talking playing cards from Alice in Wonderland while immersed in the game. Essentially, the citizens of the aforementioned "5 Realms" live in four sub-kingdoms each governed by one of the four suits: Clubs, Spades, Diamonds and Hearts, and presided over by the mighty Joker’s Tower (which makes up the fifth realm). After evil forces destroy the magic of the kingdoms, you must help a character named Jokerine restore the magic and return peace to the 5 Realms.

Unfortunately, after setting up such an interesting game world and premise, 5 Realms essentially ignores it for remainder of the experience as you dive straight into completing various card-based challenges.

In these challenges, you ‘re presented with various rows and columns of cards, and the goal is to make chains of at least three cards by connecting cards that are one rank lower or higher than the card it’s touching. For example, a 3 could be matched with either a 2 or a 4. To create a chain, you click the first card with your mouse and drag it through all the other cards, then click again to clear the cards from the board. When this is done, new cards fall from the top of the screen to fill in the gaps left by what you just cleared. An ace acts like a bit of a wildcard by allowing you to match it with any higher or lower card (not just a 2).

Stacking cards one lower or higher is one vestige of traditional Solitaire that remains in 5 Realms of Cards; another is that the dealt cards can be stacked on top of each other and you have to work your way to the bottom of the pile by clearing the cards on top.

You’ll encounter various special cards that need to be cleared in a certain way. Sometimes cards are covered in ice or have the number wiped off, and you have to create matches around them to bring them back to normal. Snowflake cards actually turn the cards around them to ice and can only be cleared by matching them with something else, while changeable cards adopt a new face value after every turn.

Whichever realm Jokerine is in will feature that particular suit prominently. For example, the Spades realm features a Spades flag bonus. By clearing a lot of Spades off the board you’ll fill the flag meter, and when full, all Spades on the board will be automatically cleared.

The game features both a Timed and Untimed mode, and the nice thing about this is that you can switch between either on the fly during the same game. (In other words, if you start the game in one mode, you don’t have to start back at scratch if you want to try the other mode.)

5 Realms of Cards also features a handful of mini-games played after each puzzle. There are two memory games and a game that involves clicking on cards as they turn over that is similar to whack-a-mole. Further mini-games are unlocked: Long Chain, where you have to clear all the cards in the pattern with a single chain, and Puzzle where you must collect all the cards in the level (you can use multiple moves this time, but the cards don’t replenish themselves). There are 36 challenges each in Long Chain and Puzzle.

While these mini-games are fun, it gets to be a pain to have to do them after every single level. Spacing them out more – say, as a fun diversion after every 5 or 10 puzzles – would have kept them fresher and been less disruptive. Another gripe is that the game’s instructions are pretty ambiguous at times. I’m still not sure I completely understand how the whole Aces / Wild Card concept works.

These issues aside, 5 Realms of Cards is still a fun, elegant and slightly exotic little game. With a little more polish it could have been even better.