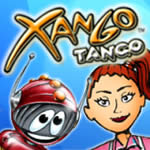 To quote beloved cartoon character Meatwad, of Aqua Teen Hunger Force fame: "Everybody loves dancing!" Even more so, naturally, when it’s a typically inanimate or computerized object such as shimmying robot Xango, star of 3D Xango Tango, that’s getting jiggy with it.

Granted, we must admit that winning levels here, which causes the hero to moonwalk, jiggle and twirl like he’s really feeling the funk, is an activity worth pursuing for pure comic value alone. But from a critical standpoint, in the grand scheme of things, it would’ve been nice if the most important part of this title – e.g. the action itself – were anywhere near as compelling.

According to the plotline, told through an attractive series of comic book-style storyboards, toymaker Tinx Robinson creates the headliner in an effort to produce the ultimate dancing droid. He also doubles as help around her warehouse, assisting with getting crates out the door. It’s a feature which works to everyone’s disadvantage though, when, unknowingly, Xango accidentally mails out upgrade parts that were intended as a gift for his first birthday. Therefore, you’ll have to take a quick spin around the world (depicted as a gorgeous, seemingly hand-drawn map), level by level, in order to recover these items.

The way to do so: Standing at the bottom of the screen, fire colored crates at 3D stacks of boxes located at the top of your monitor, in hopes of making horizontal or vertical matches. Per usual, place three or more crates of similar hue adjacent to one another by aiming with the mouse and firing with a left-click, and they’ll disappear, causing those stacked above to come tumbling down, creating the possibility for huge combos.

Playing in classic mode (a timed contest challenging you to break all crates on each stage before cranes come down and haul its inventory away) or puzzle mode (giving you a limited amount of moves in which to do so), you’ll tackle the adventure by individual scenario. In contrast, relaxed mode lets you simply enjoy yourself, with no time limit or preset goals interrupting the flow of the proceedings.

Sure, finish with extra time left on the clock and you can collect nuts, which randomly rain down, for bonus points. And yes, you can always click the right mouse button to swap the color of your current ammo. But the deeper you go into the title, the more repetitious the process becomes. Ironically, upgrades which should supposedly add charm (i.e. flashlights whose beams highlight a limited area of play on darkened stages or speed-enhancing roller skates) only compound one’s frustration too. It doesn’t help that the difficulty quickly ramps up either, to the point that 15-20 stages in, even experienced gamers will be sweating bullets.

Certainly, there are some good ideas put forward here, none the least of which are support for pseudo-3D views and such a charismatic mascot. Try the title for any length of time though, and you’ll wonder why high levels of polish were confined to the outing’s general framework and not in-game content itself. That being said, kids and adults alike will surely enjoy getting to know Xango, and be interested in seeing him appear in later adventures. But whether or not they’ll get the chance depends on your willingness to overlook several key visual and gameplay flaws, not to mention put the title’s personality above base entertainment value.