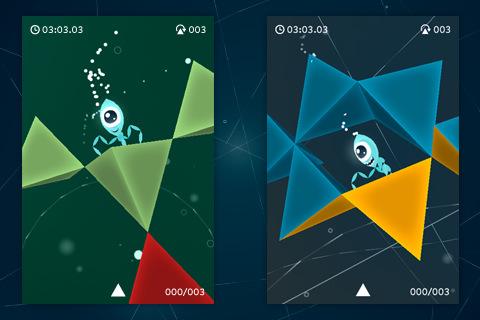 The best thing about the iPhone seems to be bringing back old games and making them feel fresh and new again, taking classic concepts and elevating them to a whole new level. 3bot takes the classic Q*bert formula and explode it into three dimensions – and does so brilliantly.

If you remember, the oddly-shaped Q*bert would leap from platform to platform, trying to change every platform from one color to another. 3bot shares this same premise, but instead of jumping along a semi-3D pyramid you’re traversing real geometry in real 3D. Once you wrap your head around this space, 3bot becomes, if you’ll pardon the overused word, sublime.

There are few tutorials, but you don’t really need them. 3bot‘s levels give you a quick heads-up about the challenge you’re about to face, then you’re dropped into the level. Moving is easy; just tap on the surface you’d like to go, and 3bot will scuttle along, awaiting your next command. The game shows you how many tiles need changing, along with your elapsed time and number of steps taken. Naturally, the fewer steps and the shorter the time, the better your achievements will be.

Of course nothing is ever that simple. 3bot takes every opportunity to throw curveballs at you, from moving and rotating shapes to platforms that disappear from under you to twists and turns galore. Each of the game’s 45 levels offers something new, and quite brain-twisting. Thankfully, the game never punishes you for taking too long or too many moves. It displays a gentle “maybe later” and encourages you to return to get that lower score and better achievement (of which there are a lot!).

Controlling 3bot is almost second nature. Along with tapping to move, rotating the world is very intuitive. By dragging your finger along the screen you can rotate the puzzle to view it from any angle. Pinching to zoom helps immensely in later levels when structures become more complex and active.

3bot boasts some of the most beautiful graphics we’ve seem in an iPhone puzzle game. Using a quirky 1950s sci-fi theme, 3bot‘s graphics are smooth, clear and just plain cool. Even the fonts for the menu graphics are cool. The audio, a weird soundscape, matches perfectly (though the option to play the iPod library would be a nice touch). It’s a solid package.

In fact, the only downsides to 3bot involve a little vertigo in the later levels. Pieces were rotating, twisting and moving so much that I actually started feeling dizzy. It’s not a complaint of particular weight; merely a small imperfection in an otherwise perfect title.

If you enjoy puzzle games, old arcade games, or just want to check out an amazingly unique title, don’t hesitate to purchase 3bot. It’s one of those games that’s easy to understand but hard to master. It’s also beautifully designed and executed. One of the best of the year.