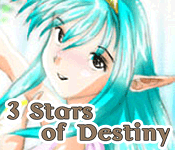 The French-made role-playing game 3 Stars of Destiny pushes no boundaries. Its teen-saves-world story is far from original, and it doesn’t introduce any innovative mechanics or scenarios. It simply maintains the classic RPG status quo.

But that’s no reason to avoid it. Indeed, fans of traditional role-playing will probably find a lot to like about this sprite-based adventure from Aldorlea Games.

The plot focuses on three teens who run up against a dastardly god looking to increase his might via a mysterious force locked away within the trio. Our young heroes (and their many companions—the player’s party is a revolving door for a large cast of playable characters) are headstrong and slow to like one another, but as they survive perils together and come to learn about their encroaching destiny they begin to form close bonds.

It’s not Shakespeare, but it should be compelling enough to hold the attention of most fantasy aficionados—assuming they can stomach the shoddy English translation, which suffers frequent grammatical mistakes and makes what might be generously described as non-traditional use of a few nouns and verbs.

Besides, whatever is lacking in narrative imagination is made up for in the game’s environments and soundtrack, which combine to do an excellent job of transporting the player into a largely uncharted, medieval world. The game’s two-dimensional maps are terrifically detailed, filled with a wide variety of colorful vegetation, excellent ambient sounds (travelling through a monster-infested swamp with naught but the blowing wind and croaking frogs is surprisingly creepy) and lots of hidden areas containing riches, items, and status bonuses.

It’s a good thing the locations we visit are interesting to the eyes and ears, because the vast majority of the game is spent exploring these maze-like environments. Most areas are enormous; big enough, in fact, that you’ll likely have a hard time keeping track of where you are, where you’ve been, and where specific switches and gates you’ll need to revisit are located. Pity we haven’t been provided a guide map of some sort to help in this regard.

As you’d expect in a classic RPG, travelling around the world results in random encounters with a wide range of monsters, including giant bees and spiders, serpents, bushes, the undead, dragons, and even the occasional human. The visuals accompanying each encounter consist of a group of monsters represented by still artwork on the top of the screen and the portraits of party members shown below.

Players can choose to attack, defend, use an item, employ a special skill or spell, or run away. A command called “rush” sets all of your characters to attack automatically for one turn. Most battles are speedy affairs, lasting no more than a few seconds, though boss battles can take several minutes as you strategically select specific skills and spells and consume items for recovery and attack.

The random fighting can grow tedious, but players have the ability to set the frequency with which encounters occur before starting out. Unless you’re keen on running into baddies every few seconds, I recommend either the lowest or second lowest setting, both of which ensure enough battles to keep your characters growing at a steady clip without becoming frustrating with non-stop fighting.

On the subject of character development, it’s a simple process, but not so rudimentary as to be devoid of strategy. Our characters’ stats rise each time they gain a level. However, at certain leveling junctions players can choose whether they want to add a bonus to stats including hit points, strength, and magic. Various consumable items found while exploring offer one-time increases to these stats as well.

I spent what felt like just the right amount of time managing my fighters. Though my inventory of items, weapons, and equipment expanded rapidly as I explored, I didn’t need to continually dive back into the game’s menus to, say, equip a newfound bow that offered a couple of additional points of attack power, or switch armor for a set that had better resistance to the sort of enemies I was facing in a particular dungeon.

With dozens of primary missions, side quests, and hidden characters, 3 Stars of Destiny can easily keep a player occupied with original content for 30 or more hours. Of course, this sort of length can be both a blessing and a curse. RPG fans looking to get some bang for their buck are typically thrilled by the prospect a lengthy game. However, it can be difficult to hold a player’s attention over such an extended period, especially if one’s interest in the genre is casual as opposed to devoted.

Whether 3 Stars of Destiny‘s plot and action is engaging enough to be worthy of a full month of hour-plus play sessions will likely depend on your level of enthusiasm for the genre and your threshold for conventionality.