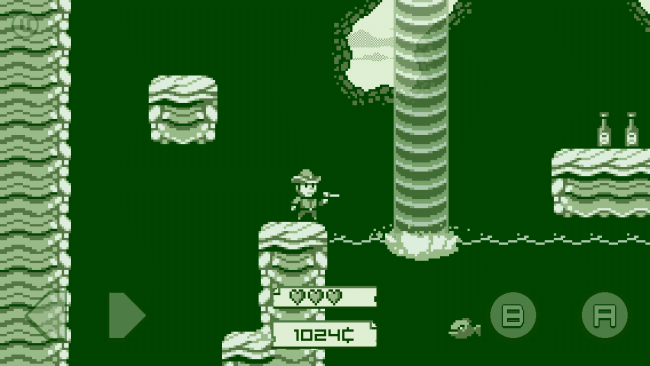 At its most basic, 2-Bit Cowboy is the lost Game Boy platformer you’re hoping for. With tight controls, great level design, and monochromatic visuals, you can play this as the simple “let’s head for the exit, cowpoke!” game that it seems to be at first glance. Scratch a little deeper though, and you’ll find that 2-Bit Cowboy is a whole lot more.

The platforming itself is tight, and despite a total lack of physical buttons, this is a spot on representation of the vintage 1989 experience the developers were clearly after. Layered on top of this is a collection of missions that forces players to explore every last nook and cranny of a level if they want to earn the most coins.

Starting these missions requires a bit of exploration too, as they’re found on wanted posters scattered throughout the level. You’ll face goals like “destroy all the bottles” or “stop the gang,” and while the objectives won’t change much from stage to stage, each level is so well designed that you won’t mind hunting for every last scorpion again.

Completing missions (and killing bad guys, and busting crates) will earn you coins which you’ll spend between levels on costume changes. It might not sound like much incentive, but hey – you’ll start the game without a hat. How long can you really leave that poor cowboy without a hat?!

Levels are fairly large, and while you’ll start out with four bits of health, it’s not hard to see them dwindle away quickly. Whether it’s finding yourself in a surprise hail of gunfire or simply falling through a bat, losing health is a fairly common occurrence in 2-Bit Cowboy. In fact, there was many a time that simply destroying a barrel would lead to certain doom. (You’ll hope for coins, but you’re just as likely to find a deadly rattlesnake). Like the Old West itself, 2-Bit Cowboy sees death lurking around every corner.

Playing carefully can mitigate some of this threat, but even after you’ve learned the ropes you’ll find yourself making rookie mistakes and cursing aloud. It’s just that kind of game. 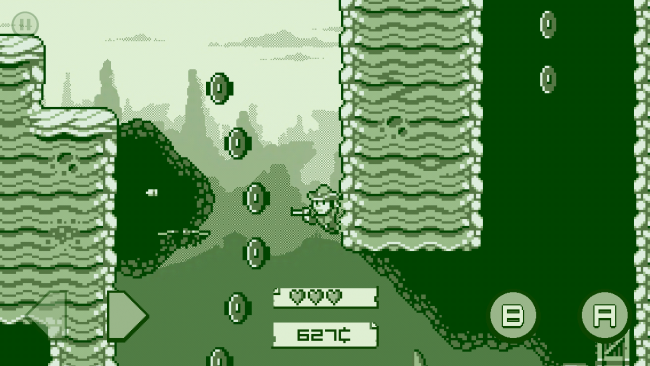 I’m not going to use the word “permadeath” here because it doesn’t really apply, but with zero checkpoints, every fatal error in judgment will send you back to the beginning of the level. The “ahh! I can’t believe I died!” frustration that results is part of the game’s charm, but when you’re trying to complete every objective on a level for the fifteenth time only to be steamrolled by an armadillo, it can get a little tiresome.

Still – if 2-Bit Cowboy is meant to play like a lost Game Boy game, punishment like this is a perfect fit.

I’m not usually one to draw comparisons between competing games, but 2-Bit Cowboy feels a lot like Mikey Shorts in terms of perfect platformer controls and great level design. The difference, though, is that 2-Bit encourages plenty of exploration and offers danger at every turn.

If I’m making the game sound incredibly hard, I’ve painted the wrong picture.  2-Bit Cowboy is both accessible and fun, but the level of challenge offered by each level’s multiple goals means you’ll want to explore, and the more you explore the more chances you have to encounter death. It’s a great balance, and ultimately a great game.

Put down your six shooter and pick up your iPhone, pardner. It’s time to make a purchase.