Home / Reviews / 1931: Scheherazade at the Library of Pergamum Review 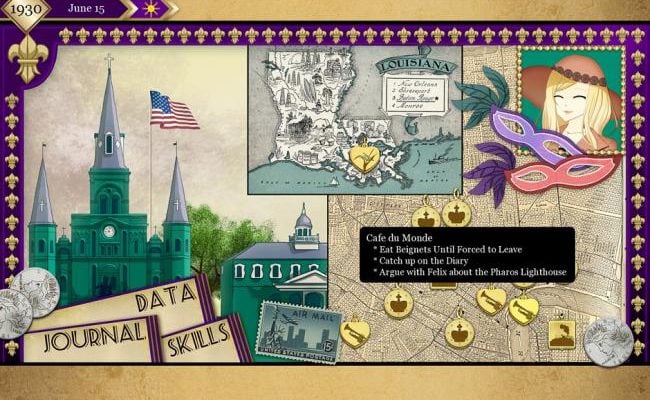 Much to the delight of long-time adventure and role-playing fans, the interactive novel’s steadily gaining ground in the casual arena. Not quite games and not quite books, these digital diversions enjoy the advantages of both, telling complex stories that allow gamers to play decisive roles. A shining example of the genre, Black Chicken Studios’ 1931: Scheherazade at the Library of Pergamum introduces us to a winning new heroine and stylishly demonstrates the endless potential of this unique form of entertainment.

Scheherazade “Sadie” Keating isn’t your average girl. She comes from a wealthy and distinguished New York family and having just graduated from high school, should be trying on dresses for the debutante ball. Nothing, however, could be further from her mind. The daughter of famous archaeologists, Sadie cares more about tombs than tiaras but has a hard time becoming a famous scholar because she’s stuck with a giddy best friend and an aunt who’d rather marry her off than let her creep around dusty dig sites.

Scheherazade comes to us from the makers of Academagia: The Making of Mages and in many ways, echoes its structure. Players unfamiliar with text-based games might be put off at first by the game’s economical approach to graphics. The story plays out via character dialog and non-animated character portraits. You click to advance the dialog, and occasionally you’re asked to respond to what’s happening by choosing from three different reactions. Your choices both help determine the kind of character Sadie is (is she serious, flirtatious or a smart-ass?), and alter the evolution of the story. More than a simple story though, Scheherazade is a role playing game, and that’s where things really get interesting. And when I say “interesting” I sorta mean “A pain in the neck.” 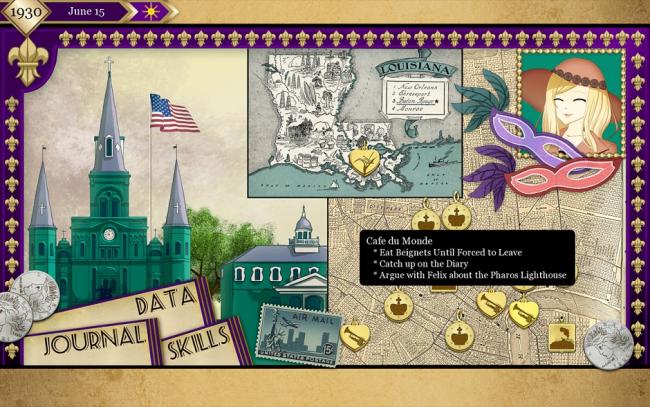 Scheherazade’s role-playing system is both its weakness and its strength. It’s complex enough to offer a good number of possible personality combos, but it’s presented in a manner that’s obscure and confusing. There’s a clever tutorial that builds in a consultation with the Keating family lawyer, but it goes by very quickly, and you can’t reference the information given in it without starting a whole new game. Put as simply as possible, time passes in a day/night cycle. The day is broken into three phases: morning, afternoon and night, and during each phase, you can perform one Action. An Action can be going to class, going on an adventure (called a “Caper”) or collecting knowledge (or “Inspiration”).

Sadie has many different attributes, like charm, athletics, wits, relationships, etc and her ability to negotiate the challenges of life depend on how developed these attributes — and the skills within them— are. Challenges come up during various adventures, class trips and expeditions and test Sadie’s courage, conscience, awareness and so on. Whatever the obstacle, her attributes/skills must be higher than the obstacle’s difficulty in order to overcome it. And this is where things get sticky.

Scheherazade’s interface lacks explanatory information and that’s bad. If you click through the tutorial, expecting to reference the gameplay specifics at a later time, you’ll be sorely disappointed. The result is that you’re all too likely to be faced with a map of New York City be totally baffled about what to do next. The interface offers no negative feedback to let you know you’re doing something wrong, and no obvious positive feedback to clue you in when you have changed something. Seemingly no effort was made to add tool-tips or help files or some other means of reminding the player what all the elements of the interface represent, and because of this, players new to the genre are bound to be lost. As it is, all you can do is build up your real-world Patience skill by tinkering around with the game until things start to click. It’s worth it though, because once they do, Scheherazade’s a lot of fun. 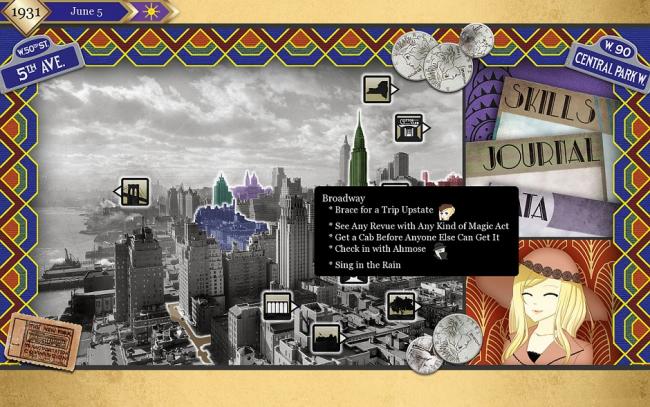 Scheherazade‘s a rip-roaring 1930’s adventure full of exotic locations, flappers, gangsters and moonshine. There’s also a strong romance element as gorgeous young men throw themselves in Sadie’s path, but it’s up to you whether or not to pursue it. (I personally, enjoyed ignoring the whole flirty-dating thing and instead spent my efforts pushing Sadie to become the female counterpart to Indiana Jones.) The characters are well-conceived, the dialog is funny and the writing contains lots of interesting historical/literary/archaeological trivia. Who says you can’t learn anything playing video games?

In addition to containing an amazing array of well-written and interesting story threads, Scheherazade looks great and offers an absurd amount of replayability. In a departure from the kids’ book illustration style of Black Chicken’s previous game, Scheherazade’s rendered in a clean, crisp Japanese Anime style that totally suits the game’s Art Deco-era subject matter. Beyond its visual appeal, it offers an impressively broad number of different possible outcomes and thus guarantees more than one playthrough.

1931: Scheherazade at the Library of Pergamum is an exceptional game, visually and narratively. The Black Chicken team has once again proven its dedication to presenting a great story and turning that story into great interactive entertainment. Their only failing? Making the game accessible. Once they take the time to do that, there’ll be no stopping them.

The Dreamatorium of Dr. Magnus Review